Britons drink the eighth most out of the European Union’s 28 member states, according to a report published on Wednesday by medical group United European Gastroenterology (UEG).

UEG is a professional body representing 22,000 experts in digestive diseases across the EU, and includes doctors, surgeons, paediatricians and specialists in gastrointestinal cancers. 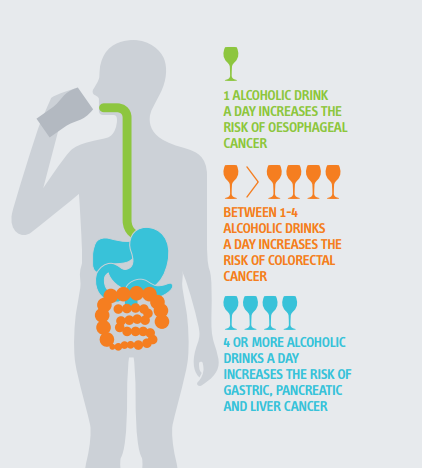 People in the UK consume an average of 2.1 alcoholic drinks every day, the report found.

“These findings show clearly that because of current consumption levels in Britain we are some of the most at-risk people for developing these types of cancers,” said Sir Ian Gilmore, the chair of the Alcohol Health Alliance (AHA).

“This is not surprising when enough alcohol is sold in England and Wales for every drinker to consume 50 percent more than the weekly limit recommended by the UK’s chief medical officers. Alcohol is a group one carcinogen and while the evidence shows any level of drinking increases cancer risk, this risk increases in line with the level of consumption,” he added.

The UK ranks alongside citizens in Latvia, Poland, Slovakia and Hungary.

However, over 20 percent of Europeans are ignorant to some of the biggest health dangers associated with alcohol.

People in Lithuania drink the most in the EU, with average consumption at 3.2 drinks a day, followed by the Czech Republic and Romania, whose citizens have 2.4 drinks daily.

Indeed, the risk of dying from an alcohol-attributable cause is seven times higher in the Eastern European region than the Mediterranean region.

“Over one fifth of the European population aged 15 years and above are drinking heavily at least once a week. This approach to alcohol consumption, the lack of awareness and the complacency regarding the associated increased risk of digestive cancers, needs to be addressed urgently,” said professor Stephan Haas from the Center for Digestive Diseases at Karolinska University Hospital in Sweden.

People in Malta and Italy drink the least amount of alcohol across all EU countries at just 1.3 drinks a day.

None of the 28 countries in Europe received a “light” alcohol consumption rating  — one drink or less per day.

The UEG is lobbying the Council of the European Union under its new Estonian presidency to make reduction of alcohol harm a priority.