A secure and reliable network is crucial in esports, where milliseconds can be the difference between winning and losing. At Extreme Networks’ customer conference in Nashville, the company demonstrated how connectivity can be used to give teams the edge over competitors. But just how crucial is the network to the industry and how is software changing the gaming world?

It is undeniable that esports has become a global phenomenon. As more and more users gain broadband access, the number of potential players and spectators has skyrocketed over recent years. Prominent players and teams boast thousands of dedicated followers who, thanks to streaming services, have unprecedented access to their favourite sporting stars.

The success and demand for gaming events has not gone unnoticed by heavyweights in both sport and technology. Almost every professional sports team has been investing in existing esports leagues and players, keen to be a part of shaping this profitable enterprise while it is still in its infancy. It is even being touted as a potential Olympic event in years to come.

But supporting esports events is not an easy feat. Games are one of the highest consumers of bandwidth, which means that universities looking to establish their own teams and facilities need to invest in heavy duty infrastructure that can ensure lightning-fast connectivity to satisfy the needs of gaming enthusiasts. Extreme Networks has put itself at the forefront of this innovative industry, providing solutions that can help to establish the necessary connectivity.

At the company’s Extreme Connect consumer conference in Nashville, Extreme demonstrated just how important network capabilities are, and how its solutions are helping teams to compete at the collegiate level.

If you want to understand how all this works in practice, you need not look further than SUNY Canton, the first varsity squad in New York State to join the National Association of Collegiate Esports (NACE).

In 2017, SUNY Canton launched its esports programme as an extracurricular, and with it began a bold venture to create a dedicated gaming arena for players to practice and compete. For a team looking to outfit itself with top-of-the-line equipment, it is unsurprising that SUNY Canton turned to Extreme Networks to help design its specialised gaming facility.

As the official WiFi and WiFi analytics partner for the NFL, Extreme Networks already had already demonstrated the capabilities of its solutions in professional sports stadiums, making it perfectly positioned to cross over into the world of esports.

“In a physical sports environment it’s all about covering a bowl – providing access points in a complicated RF environment – so that you can give connectivity to all the fans,” explains Extreme Networks CEO Ed Meyercord. “Here it’s not as much about wireless as it is about the speed and the connectivity.”

The jump from physical sports to esports isn’t as far as you might think. Gaming elements have been appearing in traditional games, from the virtual reality platforms helping referees to make calls to the growing analytics capabilities used by teams, broadcasters and spectators to gain a more in depth experience of a live game. But in esports the expectations players and fans have in terms of network connectivity is above and beyond.

Streaming is a huge part of online gaming. According to Blizzard (the company behind Overwatch) the 2018 Overwatch League Finals pulled in 10.8 million viewers globally across its two days and seven maps. That is a lot of pressure to put on a network.

Every glitch, or delay in coverage is broadcast live and can put off viewers and advertisers. This is particularly important as more colleges join NACE and begin to compete. If the network can’t ensure seamless, reliable connections due to poor infrastructure, then it can compromise the performance of a team.

“A second is a lifetime in these games, so if two teams are playing and one team has a much faster network connection they can destroy the other team because they can move a lot faster,” says Meyercord.

To tackle this issue and boost SUNY Canton’s network capabilities, Extreme Networks equipped the IT staff with its analytics package, providing a 360-degree, single point of operations view of bandwidth distribution across the campus. With this, a single network admin can monitor the network and ensure that the arena is receiving adequate bandwidth during tournaments. 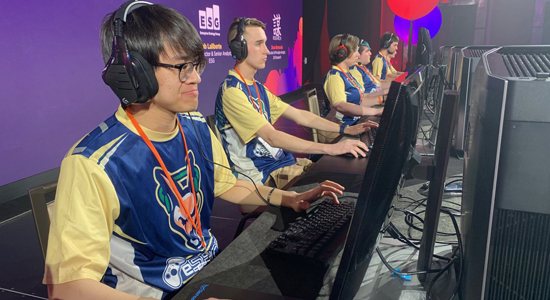 With the industry valued at just over $134.9m at the end of 2018 and on track to surpass the billion dollar benchmark this year, it is unsurprising that gaming has become an attractive target not only for fans and competitors, but for cybercriminals.

As with many other sports, doping has been highlighted as a key issue in competitive gaming. Like real-world doping, ‘e-doping’ is employed to give a player, or team, an advantage over their opponent, only in the gaming world this is done by manipulating either game software or tampering with another players’ hardware.

Video games are highly complex, and designers issue patches that completely change characters, stats and rules to keep game play interesting. With so many variables that can potentially be compromised, and so much money on the line, it is understandable that protecting their investments is a core necessity for stakeholders.

But, according to Meyercord, the hyper-segmentation and stealth features of the Extreme Fabric Connect solution allows network admins to identify hackers and prevent lateral movement.

“You can’t see any IP address so as a result you can’t really be hacked,” he said. “It’s very secure from that standpoint.”

If a device suddenly starts to act in a peculiar way or an unrecognised device attempts to hack into the network, then the admin can quickly isolate that device to prevent it from interfering with the game.

“It’s not like you are segmenting with a VLAN and setting up a separate network, you are basically creating a network within a network that you can manage and control and it’s isolated, so it becomes very easy to manage.”

Securing the future of esports

As more schools look to enter the world of collegiate esports, the state of network infrastructure is going to be one of the first issues that need to be addressed. Setting up these programmes is not cheap, and failing to invest in adequate equipment, connectivity and bandwidth to support teams could be a costly mistake, putting gamers at an immediate disadvantage against their competitors.

Consequently, AI-powered networks are becoming an invaluable feature of esports programmes. Schools have to be able to rapidly adapt to the changing environment created by competitions, particularly the significant spike in bandwidth use. AI-powered networks that can automatically react to changing elements and learn over time ways to streamline responses within such a complex environment give players the connectivity they need to concentrate on the game, without delays or glitches interrupting, or even compromising, gameplay.

The success of SUNY Canton demonstrated during the Extreme Connect conference gave spectators a brief glimpse of the profitable potential of partnering with esports programmes. But this is only the foundation of what is now a very complex and rapidly evolving industry. As more and more viewers, broadcasters, gamblers and players enter the field, it is likely that the current network requirements will become obsolete.

To satisfy stakeholders and ensure the future of competitive gaming, networks and admins will need to be innovative and flexible to keep gameplay seamless for players, secure for investors and exciting for spectators.

Read more: Here East: Building a home for esports in the UK