On 22 May, 2021, Ethiopian telecommunication regulator awarded a new telecommunications license to a consortium of companies that includes Safaricom, Vodafone and Vodacom, CDC Group and Sumimoto Corporation. The consortium bid US$850 million for the license and is expected to invest US$8.5 billion over the next 10 years.

Before April 2021, the regulator planned to award two licenses to bring new operators to the Ethiopian telecommunications market that currently is only served by Ethio Telecom. However, as only two bids were submitted, the award of second telecom license was suspended. Later, the second license will be re-tendered. The auctioning of a new telecom license is expected to stimulate the incumbent to be more efficient and competitive.

The new entrant consortium will provide 4G and 5G services in the country and is expected to put low-orbit satellite by 2023 to achieve nationwide 4G coverage in Ethiopia. Recently, Ethio Telecom extended its 4G coverage beyond the capital to Oromia region, close to Addis Ababa. Covered areas include Adama, Bishoftu, Mojo, Dukem, Gelan and Awash Melkassa. The operator has plans to further expand its 4G coverage in the country. 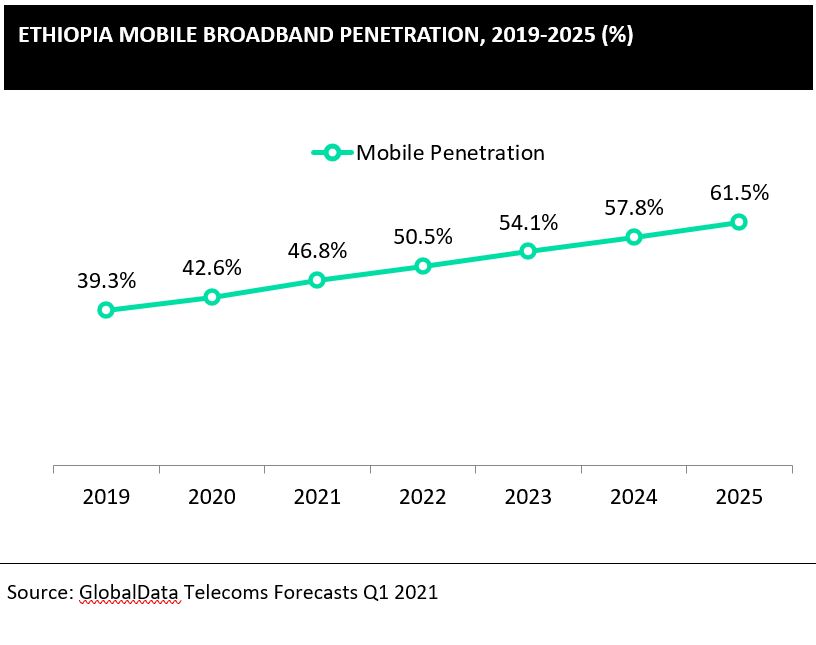 The new license allows the consortium to provide telecom services while Ethio Telecom will remain the only player in the market allowed to deliver mobile money services. This allows Ethio Telecom to build expertise in mobile financial services and help maintain its competitive advantage. The new service called Telebirr saw over 1 million users registered in the first week. The service is expected to be integrated with banks in a short term. The restriction on mobile financial services provision by Ethio Telecom only is expected to be alleviated within a year.

Ethiopia has the second-largest population on the continent with less than 50% mobile penetration, below the AME average of 97.8%. The new entrant and more competitive incumbent are expected to accelerate the uptake of mobile services in the country and help bridge the digital divide.