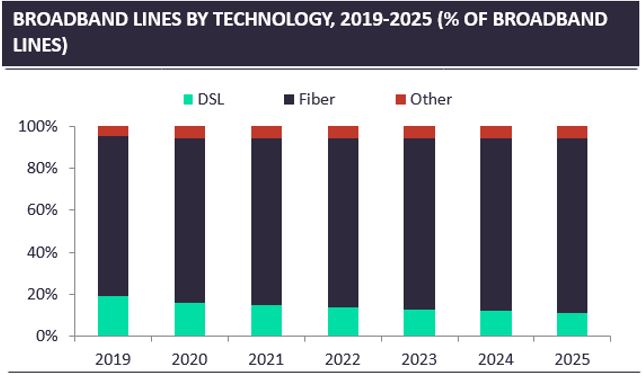 To support FTTH/B development in the country, State owned telco Antel and the government are expanding fiber-to-the-home (FTTH) networks to locations with less than 3,000 residents.

n 2021, Antel plans to complete the rollout of its fiber-to-the-home (FTTH) network in areas including Las Piedras, Santa Lucia and Ciudad de la Costa. Additionally, the country’s e-government agency Agencia de Gobierno Electrónico y Sociedad de la Información (Agesic) announced “The Uruguay’s 2025 Digital Agenda” in May 2021, which is a continuation of the country’s digital policy process, began back in year 2000. This agenda primarily sets out the strategic areas, which include five focus areas and 12 key priorities, that will form the digital development trajectory over the next five years.

The plan focuses on providing sensors for public utility facilities such as energy, water, and transportation, extension of fiber-to-the-home (FTTH) networks to locations with less than 3,000 residents, nationwide availability of 4G network, assignment of additional spectrum bands for mobile services, as well as accelerate the 5G roll-out.