The latest headline-making move by Italy, levying a $1.28bn fine against Amazon, is just “the tip of the iceberg”. The country has launched multiple antitrust cases against Big Tech recently.

Italy’s latest move comes as regulators around the world are turning up the heat under the global web giants, with the data indicating that the number and size of fines are growing.

“Amazon holds a dominant position in the Italian market for intermediation services on marketplaces, which Amazon leveraged to favour the adoption of its own logistics service — Fulfilment by Amazon (FBA) — by sellers active on Amazon.it to the detriment of the logistics services offered by competing operators, as well as to strengthen its own dominant position,” it said in a statement.

AGCM added that will impose corrective steps that will be subject to review by a monitoring trustee.

Amazon has said it “strongly disagrees” with the fine and labelled it as “unjustified and disproportionate”.

An Amazon spokesperson told CNBC that over 50% of annual sales on its platform in Italy come from small and medium-sized businesses, adding that Amazon is just one of the “multiple channels” SMEs can pick from to sell their stuff.

“We constantly invest to support the growth of the 18,000 Italian SMBs that sell on Amazon, and we provide multiple tools to our sellers, including those who manage shipments themselves,” the spokesperson said.

Amazon isn’t the only Big Tech firm that regulators in Italy have taken aim at recently.

In October, the AGCM fined both Amazon and Apple a total of over €200m for allegedly restricting who was allowed to sell Apple and Beats products on the platform in Italy. A 2018 agreement between the two meant only certain retailers had been allowed to sell the products on Amazon.it. Both companies said they would appeal the fines.

But those weren’t the last penalties Italian regulators levied against Big Tech firms. Later in October, the AGCM levied one €10m fine each against Apple and Google, accusing them of having failed to obtain users’ consent before collecting their data.

“The Italian regulator has been quite active in issuing fines against Big Tech over the last few years, but maybe it didn’t make the news as these were small fines,” Laura Petrone, principal analyst in the thematic research team at GlobalData, tells Verdict.

“For example, it was among the first to fine Facebook – in that case, $11.4m for misleading users over its data practice in 2018. It also fined Apple and Samsung €10m and €5m respectively for the ‘planned obsolescence’ of their smartphones. But the $1.3bn fine against Amazon is one of the highest fines issued by an EU member state.”

These fines represent significant sums of money in many contexts, but they are unlikely to make a significant dent in the companies’ balance sheets. Apple reported making $83.4bn in revenue in the last quarter alone. In that period, Google’s revenue hit $65.1bn and Amazon’s revenue was $110.81bn.

However, the number and size of fines have grown very significantly over the years.

One of the biggest tech fines to date was levied against Microsoft by the EU in 2008 after the Redmond-headquartered giant had failed to comply with a 2004 order against preventing competition from other browsers.

Fast-forward to 2017 when the EU slammed Alphabet with fines totalling €8.2bn for breaking antitrust rules in search, Android and advertising, as per GlobalData’s recent Antitrust in Tech, Media, and Telecom (TMT) Industry thematic research report. 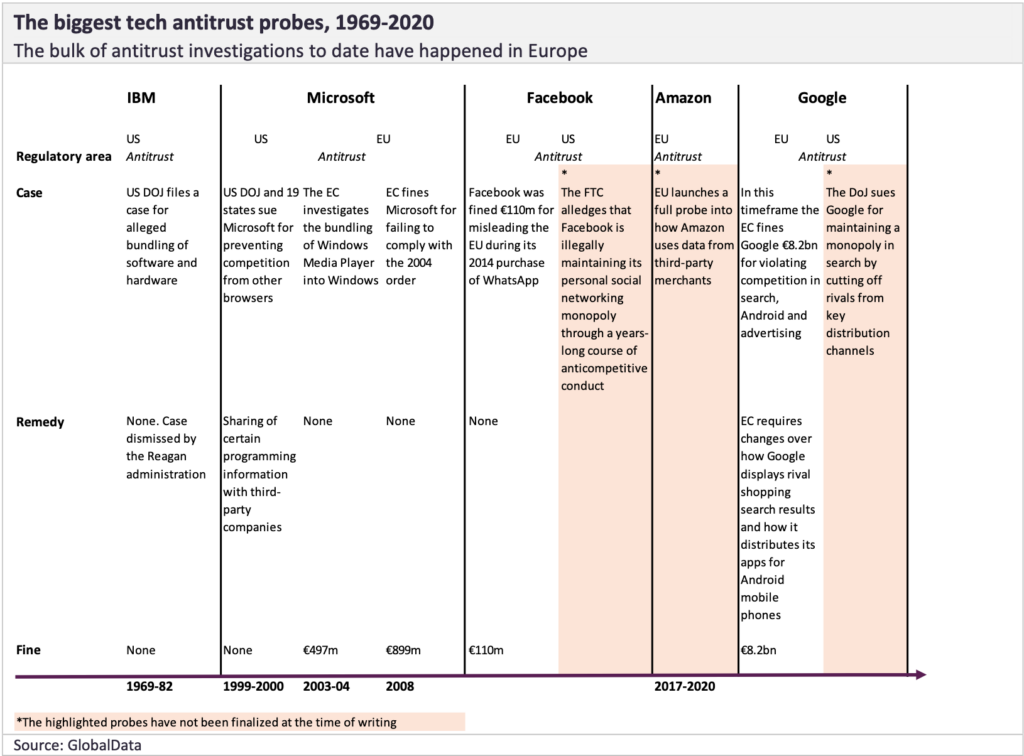 “What’s remarkable is also that the EU has been investigating Amazon for perceived dominance in ecommerce and for its dual role as both retailer and a marketplace for years now – the probe was first opened in 2018,” Petrone continues. “There are two EU antitrust investigations currently underway but, although the EC charged Amazon with anticompetitive practices last year, no fine has been issued as yet. It even seems that Amazon is seeking to settle the investigations with the EU to avoid potential hefty fines.”

Big Tech crackdowns all around

Ruhell Amin, global head of retail equity research at William O’Neil + Co, told CNBC that the latest Amazon fine is part of a broader worldwide trend of regulators clamping down on Big Tech firms. “This certainly seems like the tip of the iceberg,” he said.

Indeed, 2021 has proven a big year for Big Tech interventions. Facebook is facing growing pressure from lawmakers following whistleblower Frances Haugen’s allegations that the social media company is putting profits above protecting its users. The adtech beast, which recently rebranded itself as Meta, is also facing growing scrutiny of its $315m acquisition of Giphy. There’s also a strong push back against its planned rollout of its own cryptocurrency Diem, formerly known as Libra.

Google has similarly faced growing disquiet over its in-app payment systems, leading South Korean lawmakers to introduce a law forcing it to allow third-party payments. In Australia, regulators have accused the adtech firm of strangling competition by being the default search engine on Google Chrome and Apple’s Safari browser.

The European Commission has similarly accused Apple of choking competition by forcing third-party developers to either agree to unfair rules in its App Store or risk getting booted from the iOS ecosystem. This was also the main focus of the Epic/Apple trial earlier this year.

US senators introduced a new bill in August to rein in Google and Apple’s app store dominance. US courts have been unfriendly to the tech giants’ practices in other cases and places.

The EU is also gearing up to launch new antitrust rules for the trading bloc in 2022.