Goldman Sachs significantly exceeded expectations today as it posted its first quarter results. The bank reported $10.4 billion in revenues, far above predictions of $8.75 billion, and up 25% from the same period last year.

Net income came in at $2.8 billion, rather than the $2.2 billion expected by Thomson Reuters’ analysts, and represented a 27% increase year-on-year.

Earnings per share were $6.95 on a fully diluted basis, jumping from $5.15 in the first quarter of 2017. Goldman Sachs also raised its quarterly dividend five cents to 80 cents per common share.

Shares in the company sank at the New York open, however. 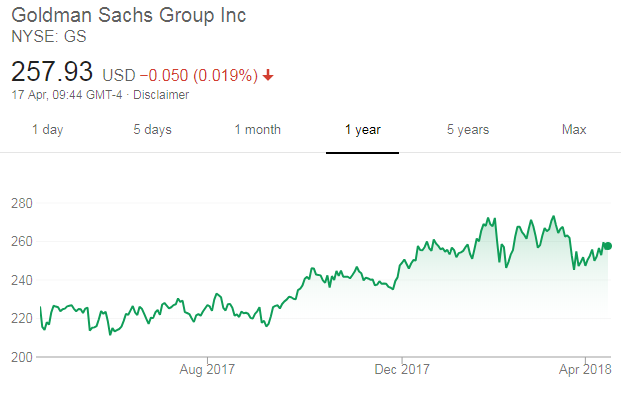 The fixed-income, currency and commodities trading division reported revenues of $2.07 billion, marginally below the $2.13 billion consensus analyst estimates from FactSet.

However, this represents a 23% increase from the same period and last year and suggest that the bank has overcome its initial difficulty in adjusting to the so-called Trump trade.

Revenues from stock trading were up 38% to $2.3 billion, beating the $1.9 billion analyst consensus forecast, while the investment banking division saw total revenues rise 5% year-on-year to $1.8 billion.

Goldman Sachs return on equity was the highest in five years, at 15.4% on an annualised basis. Following the results, Goldman’s shares rose about 1% in pre-market trading.

Goldman’s core trading business seems to have profited from the recent volatility of the stock market, which has been especially movable lately as Wall Street contemplates the trade battle between the US and China.

In a statement, the bank’s CEO Lloyd Blankfein said:

Solid performance across our businesses produced strong returns in the first quarter.

We are well positioned to serve our clients as the global economy continues to show strength and central banks unwind certain aspects of policy stimulus.

We are also broadening our client base and further diversifying our businesses to drive more revenue and earnings growth for the firm.

Goldman was the fifth of the major US banks to report today.

Trends were broadly positive among JPMorgan Chase, Citigroup, Wells Fargo and Bank of America. Cuts to the corporate tax rate are thought to have provided a boost to recent results.