The Goodwood Festival of Speed is a celebration of automotive innovation, showcasing the rich history of motorsports and the remarkable technologies driving us into the future.

The Festival of Speed, which has run annually since 1993, features over 600 cars and motorcycles spanning across all eras, from vintage classics to top-of-the-range supercars.

Taking place at Goodwood House in West Sussex, UK, the Goodwood Festival of Speed 2019 has plenty of cutting-edge technology on display – and not just in cars.

Verdict visited the Festival of Speed to take a look at the top tech on show. 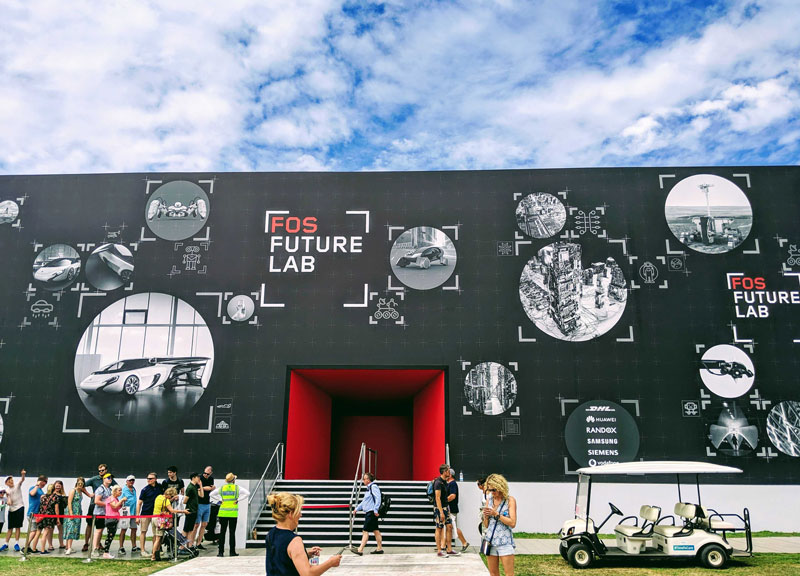 Lightyear One: Solar power with style

Lightyear One is a high-end electric car with a twist – it can get its power directly from the sun. Solar panels are built into the car’s roof and hood, which means it’s always charging when it’s sunny.

In bright conditions, it takes around one hour to get enough charge for about 10 miles of driving. On a full charge, the car has a guaranteed range of 400km, but Lightyear says the car will have a maximum range of 800km.

Lightyear, a Dutch company, was founded by students who took part in the World Solar Challenge race event. After realising their car still had power to spare at the finish line, they decided to create a commercial vehicle that can help reduce emissions.

Lightyear One is all about efficiency. Cameras replace wing mirrors and its curves are designed to make it “as aerodynamic as possible”, culminating in a drag coefficient of less than 0.2.

It has a motor in each wheel and no drivetrain to save weight and reduce transmission losses. The car was only unveiled last week and is expected to go to market in 2021 at a pricey €149,000. 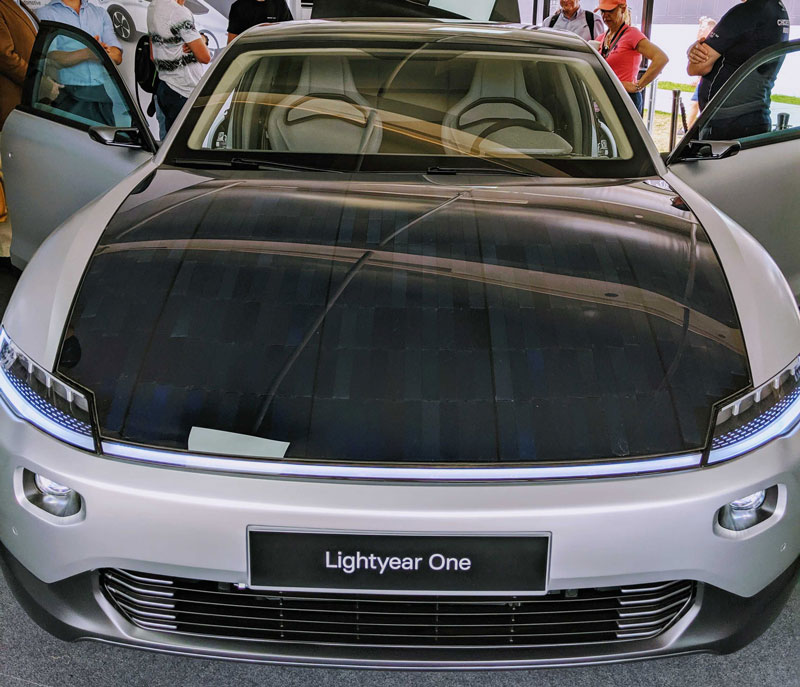 The Academy of Robotics is aiming to solve the last mile autonomous delivery problem with Kar-Go. The bright green vehicle, on display outside the Future Lab, uses twelve hidden cameras and distance sensors to navigate without a driver.

Customers will be able to track the precise location of their package like you would a taxi on the Uber app. This means you don’t even need to be home to collect your parcel.

“The most unique aspect is you will never have a missed delivery,” William Sachiti, founder of the Institute of Robotics, told Verdict. “You don’t have to be at home as long as you’re in the catchment area.”

When Kar-Go arrives, it will recognise the proximity of your phone and open the hatch. A clever automated basket system inside the vehicle moves shoebox-sized packages around to ensure that only your package is accessible.

The electric vehicle can travel around 120 miles on a full charge. And it’s not a just concept – the vehicle on display will be on the road within 90 days, delivering packages in a yet to be confirmed location, Sachiti told Verdict.

You can see it in action for yourself, with demonstrations of its delivery abilities at 1:30pm and 3pm each day at the Goodwood Festival of Speed. 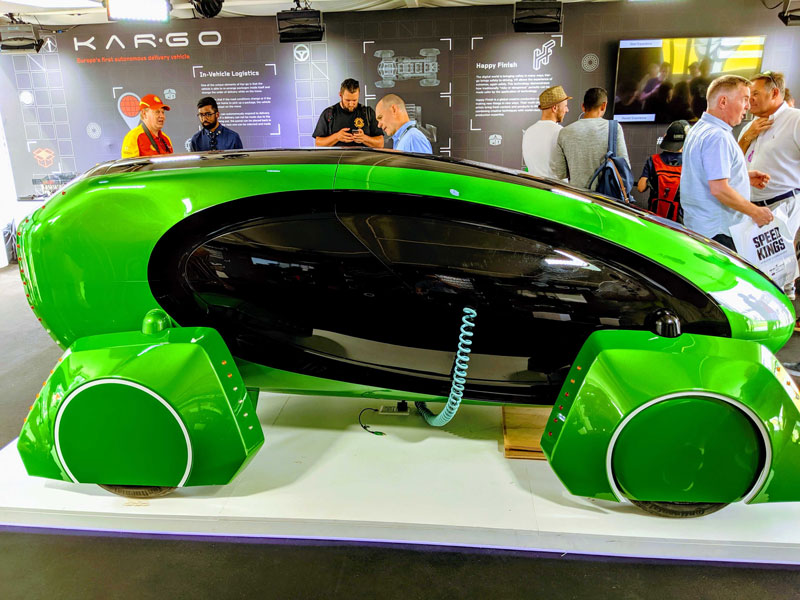 The US company demonstrated its tech on Friday when drift champion Vaughn Gittin Jr remotely drove a car up the Goodwood Hillclimb. The Lincoln MKZ car was covered in Samsung Galaxy S10 5G handsets, using theirs cameras to send live footage to a Samsung VR headset worn by Gittin, who drove the car while sitting in the Future Lab.

This data was sent over Vodafone’s newly launched 5G network, demonstrating advances that will be possible with the next-gen cellular network.

Entertainment isn’t the focus of Designated Driver, however. Teleoperators could act as remote, back-up safety drivers for autonomous vehicles, or human operators taking over during the last mile of delivery.

“Another use case is shipping yard logistics facilities that need to move a whole lot of cargo around,” Evan Livingstone, hardware lead at Designated Driver, told Verdict. “It would be easier if you could do that from server command stations and just sit there and move cargo around.” 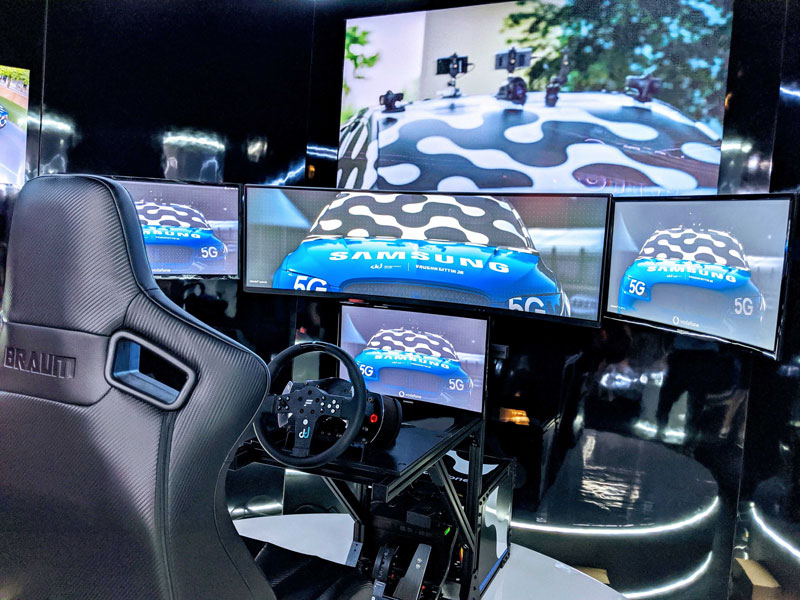 Honda’s first electric car made its UK debut at the Festival of Speed. Its fast charging technology means it can reach an 80% charge in just 30 minutes, before slowing down the charging rate to maintain good battery health.

A full charge will get you roughly 200km, which is at the lower end of electric car ranges. But with its dinky size – barely 12ft 7in long – it’s clearly a car meant more for zipping about cities than long road trips.

Wing mirrors are replaced with cameras, with the rear view visible via two screens at each end of the dashboard. Three more screens fill the rest of display: one with the usual gauges and two that can show different displays or be linked together, enabling scenarios such as the front passenger entering sat nav details and swiping it across to the driver’s screen.

A rotating prototype is on the top floor of the Honda stand. You can’t sit inside this car, but there are virtual reality goggles to give you the next best thing.

This is no ordinary 3D printer. Watch as AI Build’s robot arm, AIMaker, slowly forms a curving vase right before your eyes. The printer feeds filament down to an extruder head and through a heated nozzle at temperatures up to 240°C.

AI Build use artificial intelligence to autonomously refine the structure and automatically detect print failures. The company fed its machine learning software with droves of images of failures and defective prints. When a camera on the robot arm detects a failure, it stops automatically so that an operator can take action.

The robot arm provides more degrees of movement than a conventional 3D printer, which tend to be housed inside box-shaped devices.

“You’re really only limited by the reach of the arm,” Alex Cartwright, a mechanical engineer at AI Build, told Verdict. 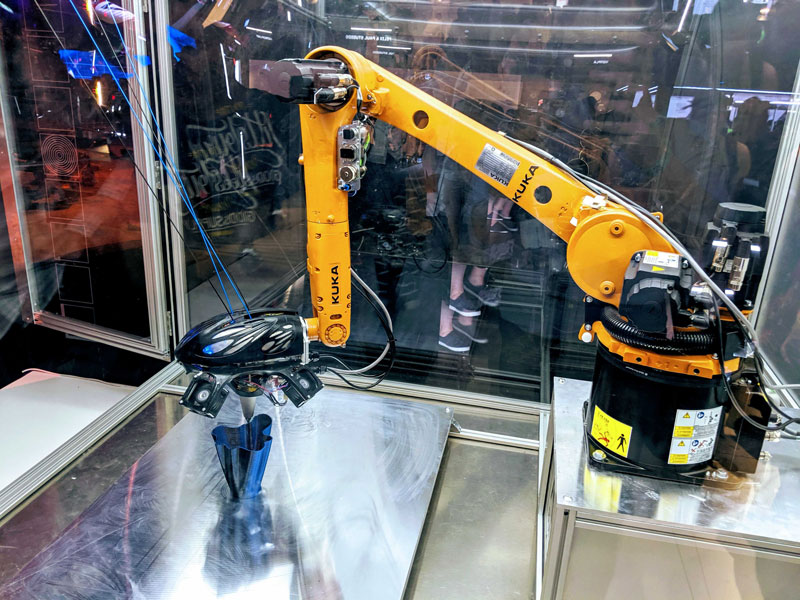 Experience life on the International Space Station in this stunning preview of an upcoming documentary from TIME and Felix & Paul Studios about life in the Earth’s orbit.

The footage was filmed just a few weeks ago by astronauts using a virtual reality camera, giving you breath-taking 360-degree views of astronauts going about their day-to-day tasks, such as exercising and maintenance.

Headphones mean you’re completely immersed and for a few short minutes, you feel like an astronaut – barring zero gravity of course.

With so much to see in the Future Lab and the wider festival, you’re not short of futuristic technology.

All around the Goodwood Festival of Speed site there are plenty of driving simulators, including a Mercedes AMG Petronas Formula1 simulator.

Elsewhere in the Future Lab, you can also control a MekaMon spider robot with Reach Robotics, peak inside The Triton, the toughest submersible ever made, and take a tour of industry 4.0 with Siemens.

Huawei is also giving you a glimpse of the future of gaming in a 5G world with its demos of cloud games, including a difficult to master VR game in which you’re balanced on a gyroscopic control.

Not all of the innovations being showcased at the Goodwood Festival of Speed are purely Earth-based.

As a non-profit project with the European Space Agency, Astroplant doesn’t make any money from selling its kits. But it does get all the data – which means every child taking part is contributing to the science that could one day help astronauts grow food on Mars.

There’s more Mars tech at the Future Lab, with a replica of ESA and Airbus’ ExoMars rover on display. A final rover is currently being constructed in a clean room. Scheduled for launch in 2020, it will search for life on the red planet in a joint European and Russian venture.

Flying cars and AI: The future of racing

Then there’s Alauda Racing, displaying its Airspeeder flying race car. The electric, vertical take-off and landing pod is still carrying out unmanned testing and hopes to begin racing in the next few years, pitting elite pilots against each other in a motorsport unlike any other.

An alternative take on futuristic racing is Roborace’s DevBot 2.0, the autonomous racing car that pits human and AI teams against each other – as well as providing a testbed for driverless cars on the road.

From electric to autonomous

Of course, ground-based vehicles are at the core of the festival, and there are both expected and unexpected treats to be found.

Polestar is displaying two of its plug-in hybrid electric cars at the Goodwood Festival of Speed.

The Polestar1 is a plug-in hybrid with a capacity of 34kWh spread across two battery packs, giving it an electric range of 150km. Also on display is the Polestar2, an all-electric car with a 78kWH battery and a range of 500km. 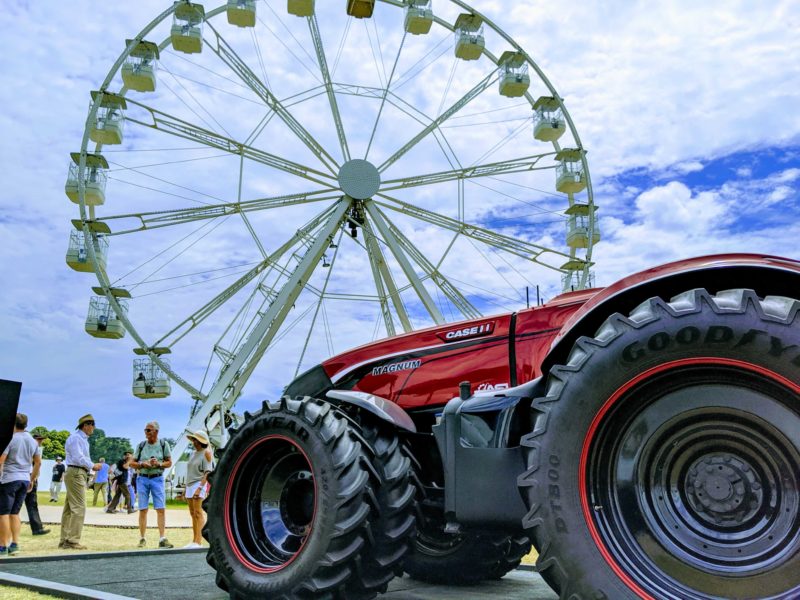 If you prefer your autonomous vehicles to be chunky, then Case IH is displaying its hulking autonomous tractor concept vehicle that can operate all day and all night. Located between the Future Lab and the Ferris wheel, it’s difficult to miss.

There is, of course, plenty more to see and do at the Goodwood Festival of Speed 2019, from classic cars to Formula 1 championship-winning cars. Rallies and hill climbs run all day, plus there’s off-road action and GAS motorcycle stunt shows.