There are more than 7,000 rare diseases in the world but just 5% have an approved treatment. This is largely due to the high costs and low return of rare disease drug treatments. Developing them runs into the billions of dollars yet there is a comparatively small number of people buying them. This means that the more than 400 million people worldwide who are affected by these rare diseases either have found that treatments don’t exist or their cost is inflated to eye-watering levels.

Yet it doesn’t have to be this way. Tim Guilliams is the co-founder and CEO of Healx. The Cambridge, UK-based startup is turning to the data-crunching power of artificial intelligence (AI) to rewrite the economics of drug discovery for the world’s rarest diseases.

“It’s a huge problem and if you try to address it in the traditional way, you know two to three billion dollars per drug, 10 to 15 years, it just doesn’t work, it’s impossible,” Guilliams tells Verdict. “I think we found a sweet spot where we can basically maximise the work that’s already done by applying machine learning and finding shortcuts to this very long drug discovery process.”

This process begins with a “deep data curation” phase, which sees Healx’s AI program look for gaps in existing medical data. Once identified, the biotech startup works with patient groups and academics to help fill them.

“The quality of what goes into your algorithm really relates to the quality that comes out,” explains Guilliams.

Or as the saying goes – garbage in, garbage out. Guilliams explains that filling these data gaps is “the hard bit”.

Finding these links means researchers can work backwards and start exploring possible links between the treatment for the common disease and the rare disease.

This is where AI steps in again, with multiple algorithms and analytics running in parallel to crunch the data, fill in the gaps and create a disease signature based on various genetic expressions.

Part of this includes natural language processing algorithms that trawl through scientific literature – papers, findings, research – to search for links that humans would be unlikely to find. In some cases, this is via application programming interfaces connecting to sources such as clinicaltrials.gov. A team of human data curators then verify the information generated by the AI

Once these findings point to a candidate drug treatment, Healx heads to the lab for testing. If the results are positive, it’s time for a clinical trial.

Crucially, because the treatments are based on drugs that have already been approved, Healx can avoid many traditional development steps and dramatically speed up the process, making it three to five times faster.

“We know that people have been taking some of these drugs for 20 years, they’re safe, so you can really accelerate the process,” he says.

Healx traces its beginnings to when Guilliams met David Brown, the co-inventor of Viagra, in a Cambridge coffee shop.

“Cambridge is a small place,” shrugs Guilliams. But the company “really came together” when they met Nick Sireau, who more than a decade earlier had created a patient group to help save his son from an extremely rare genetic disorder called Black Bone Disease.

It prevents the body from fully breaking down certain amino acids, which leads to significant damage to the bones, cartilage and tissue.

“He was trying to repurpose a component of a weed killer to save his children,” says Guilliams. Sireau was successful – it has since been approved by the European Medicines Agency.

Working with patient groups such as Sireau is crucial to Healx’s approach. Guilliams believes their tech-enabled approach sets it apart from traditional biotech or pharmaceutical companies.

Much like software companies, much of Healx’s efforts go into building applications, albeit for internal use to make sense of their drug data. It is also a remote company and doesn’t own any physical labs.

“We’re a virtual company. Everything is outsourced and it’s a really lean and cost-effective way of doing business,” says Guilliams.

The majority of its more than 70 employees hail from tech or data science roles. In June 2020, Healx poached Meri Williams from fintech Monzo as its new chief technology officer.

“So in that sense we’re very much like a tech company [rather than a] traditional biotech company, [which] will have a very different skill base,” says Guilliams.

But the nature of Healx’s product – drugs for rare diseases – also sets it apart from your SaaS startups or cloud providers.

“We’re not here to sell algorithms to pharma companies and sell software,” says Guilliams. “That’s not what we’re here for. We’re kind of a tech company but want to invent treatments. That’s the mission of the company.”

Some rare disease drugs cost more than $1m per patient per year, with the cost being directly related to the high-costs and low volume of sales.

“That’s how the industry in a traditional way compensated – instead of changing the process to a more cost-effective way, they just increased the price tenfold, twentyfold, or higher. And that’s what we don’t want to do,” explains Guilliams.

This has been a long-standing concern for healthcare organisations. In 2017, the American Academy of Neurology released a position statement that “action must be taken to ensure that prescription medications are accessible for patients with complex, chronic neurologic conditions”.

How does this square with Healx’s efforts of becoming a profitable company? Guilliums concedes that rewriting the economic model for drug discovery is “not an easy thing to achieve”.

But he is confident that Healx is on a “good path” to doing so and that its cost-effective, tech-driven approach will eventually be able to produce cheaper drugs while also creating profits.

For now, though, it will require further private equity investment to keep it going. So far it has raised $67.9m. Guilliams says a Series C round is planned but it’s “not in a hurry”.

He insists the end goal is to “build a big company” and that there is no intention to “flip the company around quickly”.

Healx “won’t exclude the possibility” of acquiring companies along the way to help grow. 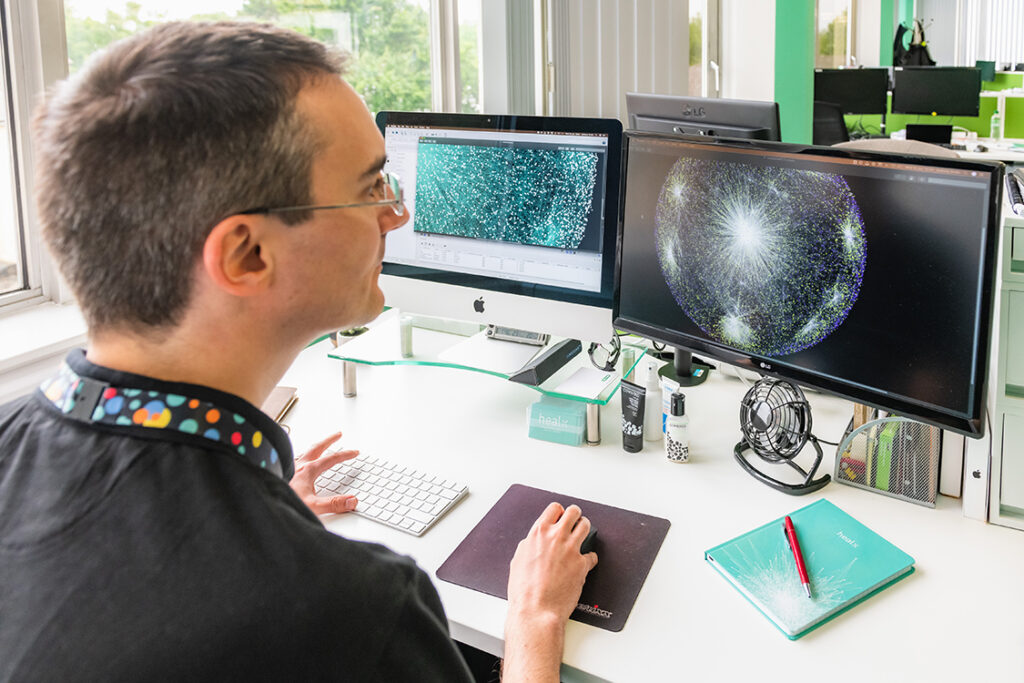 The Covid-19 pandemic has demonstrated remarkable advances in science. Where it was previously unthinkable to produce a vaccine in under five years, researchers were able to discover and approve half a dozen in less than one.

But the pandemic has had good and bad ramifications for the rare disease sector as resources were understandably redirected to combat Covid. Much of its work is dependent on charities and non-profits, but this has taken a huge hit amid the associated economic downturn.

“That space has really been put on hold. Some of the leading rare disease charities in the UK have had up to 80% of their staff furloughed,” says Guilliams. “So that’s had a really negative impact in that sense.”

For Healx, it has meant long delays on projects, with its outsourced lab testing hit particularly badly. As hospitals were swamped with Covid patients, it meant many trials were put on hold.

Yet there have been positives, says Guilliams. There has been an “acceleration” towards tech-enabled clinical trials. This includes remote monitoring, where clinical trial participants remain at home with a wearable device sending data back to the researchers. Telemedicine, virtual appointments have also become widely adopted throughout the pandemic.

“In a world where suddenly nobody can travel, you have new solutions coming up,” says Guilliams.

And these technologies have extra benefits for rare disease patients, he argues.

“They are vulnerable because they have a rare disease, and 95% of them don’t have a treatment for their disease, so they are the people who should definitely travel less, isolate.”

“The tech advancement this year and just realising that you don’t have to do the traditional trials anymore, there are ways around this, I think it’s been really positive.”

Some treatments Healx will take to market and patent itself, from the start to the end of its lifecycle. With others it works with co-development partners to share the costs and returns.

Ultimately, Healx’s goal is to get the treatment to patients directly. To do so it plans on doubling its headcount this year to more than 120 people and double the number of projects in its portfolio.

“What’s different with Healx is that we’re really trying to change the economics of inventing a treatment,” says Guilliams. “And because we believe we can do this in a cheaper way, in a faster way, with a higher likelihood of success [and] offer much cheaper development costs.

“And therefore, we can find a business model that’s sustainable, that’s scalable, but very different from the traditional rare disease drugs.”