Often filled with drab colours and utilitarian furniture, the typical meeting room is not a space that inspires creativity. In fact, according to a recent survey by Clutch, only 47% of employees currently have a workspace that they find aesthetically pleasing or comfortable.

One project has set out to change that. With plush green velvet chairs, bright pink walls, and house plants dotted around the space, entering The Agora feels more like entering a stylish dining room than a place of work. 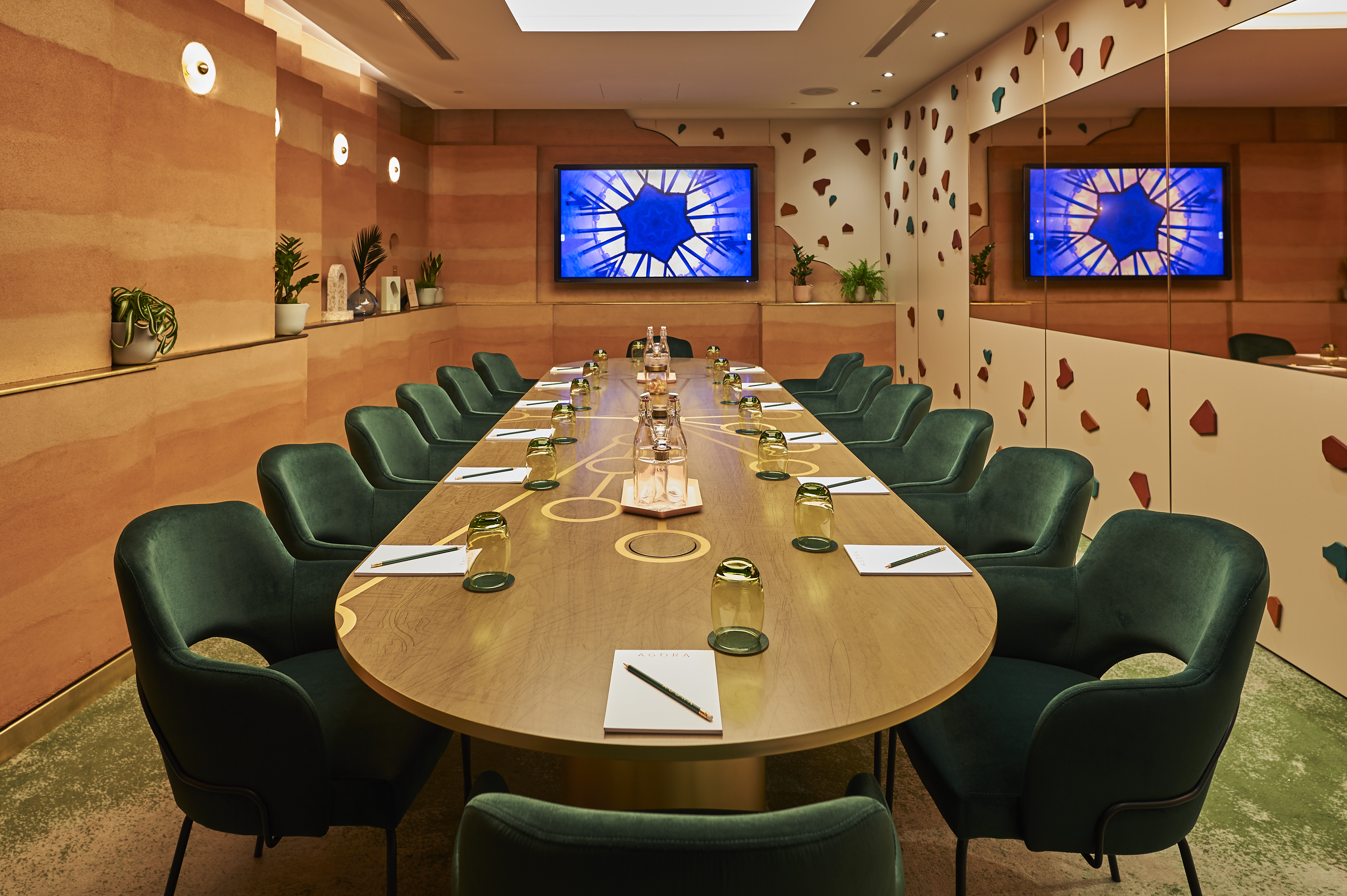 Greek for ‘gathering place’, The Agora is collaboration between The Hilton London Bankside and Bompas and Parr. It is a meeting room with features specifically designed to stimulate creativity.

Bompas and Parr, the designers behind The Agora, are no strangers to the unusual. Previous projects have included an outdoor urban spa complete with a waterfall of pink mist, and an immersive ice cream exhibition featuring glow-in-the-dark ice cream.

Harry Parr, co-founder of Bompas and Parr, explains that this collaboration with Hilton London Bankside had equally unexpected origins:

“We wanted to do a project called voice of God. We’d been interested in a little-known scientific fact that was discovered by a scientist working in his workshop late one night and he kept thinking that he saw ghosts. He did some investigating and found that a new piece of air conditioning equipment had been installed and it was creating this frequency that was very low so you couldn’t hear it but you could feel it. And it turns out that that frequency makes your eyeballs vibrate, so you do actually start seeing things.

“So we wanted to replicate this, so we commissioned a huge speaker and made this sub-bass sound, and we needed a space for it as the speaker is the size of a grand piano. So the swimming pool downstairs [in the Hilton London Bankside] was perfect for it. It was quite a weird experience where people came in and thought they were seeing ghosts in the swimming pool downstairs!”

After approaching Hilton London Bankside at the Bankside Design Week, the company was given the task to create a creativity-boosting meeting room, a bespoke addition to the existing meeting spaces at the hotel. 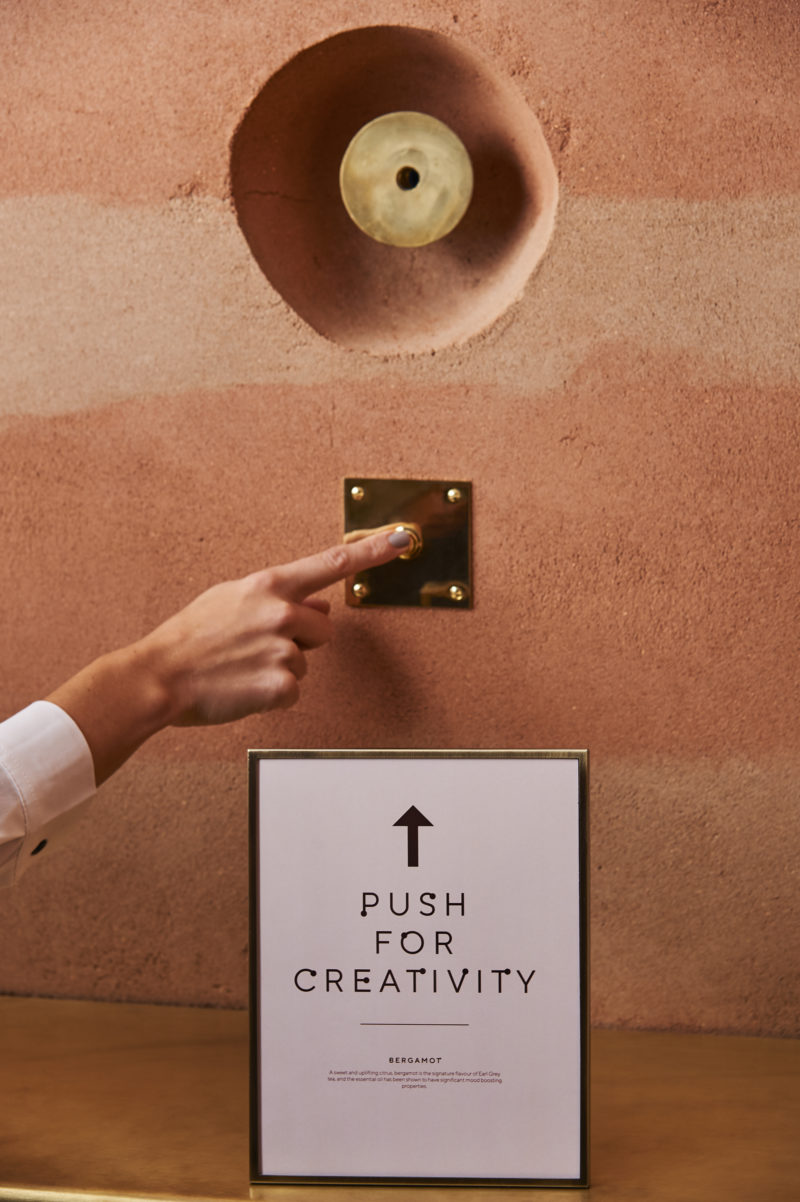 The results do not disappoint: the multi-sensory meeting room certainly channels the out-there ideas the pair from Bompas and Parr are now known for.

The room is full of unexpected features, including an enticing “press for creativity” button which, when pressed, engulfs the room with a jet of scented air designed to reinvigorated those inside with a blast of lemon, cinnamon or peppermint.

Even the tea selection has been carefully chosen, with the curated tea menu including ingredients such as kelp, thought to improve memory, and ginko to increase blood circulation.

They may seem wacky, but Harry explains that the features of the room are in fact based on the “psychology and science of human interaction”:

“When we set out to do the project there was a research phase where we went through all of these details and collated everything together and that became the framework for how we were going to design a room that could include those features. It’s not just made up. But you then mix that with aesthetic decisions, which have more leeway in them, and then also function decisions as well.” 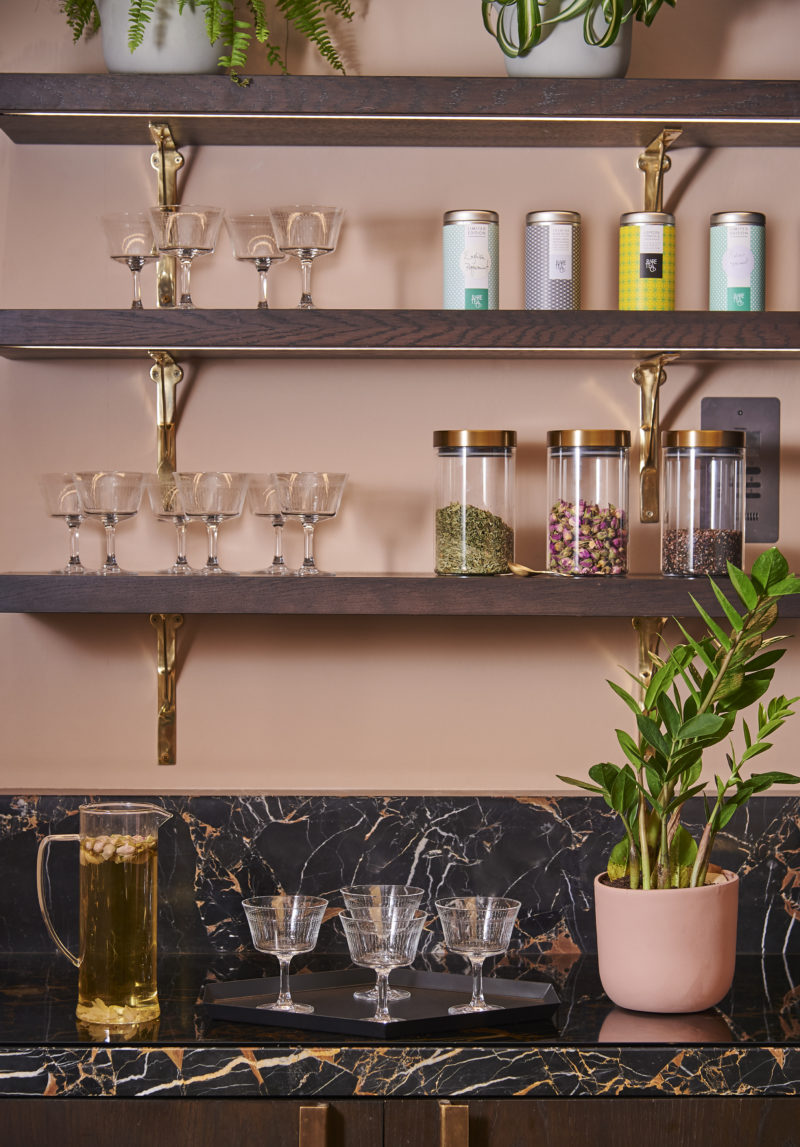 Located just a stone’s throw away from the Tate Modern and The Globe Theatre, the Hilton London Bankside is firmly rooted in the local area.

Even the table, the vocal point of the room, has links to its surroundings, with the table top designed to resemble a map of Bankside. The room’s 75-inch screen plays a video art installation from London-based artist Doug Foster featuring local landmarks.

More practically, general manager of Hilton London Bankside James Clarke believes the room will be a good resource for local small businesses in Southwark, many of whom lack the space for large offices:

“From a business point of view, I see Southwark has one of the highest percentages of small businesses in the UK…so this room is ideal to cater to that need. And the business in this area is all tech, architecture, design and art…so that’s why we collaborated with a local gallery as well. So it really brings it all back to Southwark.” 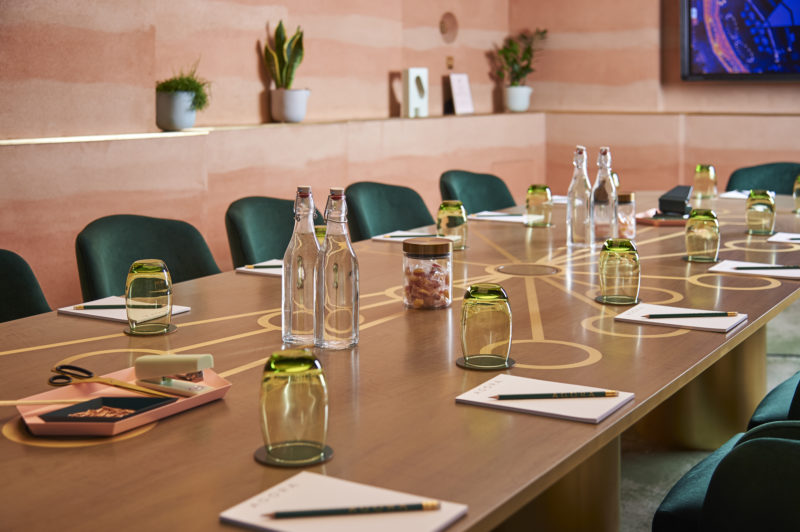 Aesthetic appeal aside, the space has to function first and foremost as a meeting room. It was designed with technology at its heart, especially the bug-bear of having to deal with numerous different wires that modern technology brings.

The Agora combines design with technological sophistication with charging units incorporated into the custom-built table, and the Clevertouch screen at the centre of the space offering a variety of features such as device mirroring and a digital whiteboard.

The lighting in the room has also been developed with productivity in mind, with customisable colours and brightness levels designed to improve work performance. The skylight can be fine-tuned to mimic any environment, currently set to look like a gloomy London sky.

Harry believes that this integration of technology and design should be seamless:

“The key thing has been about usability, so it shouldn’t feel like there’s a tech barrier, it should just be a seamless thing. And if you want the lights to change it should be obvious how that happens, if you want to connect your computer up or you mobile phone or your tablet it’s easy to do.”

With 42% of Brits working flexibly in one form or another, businesses have to try harder than ever to attract workers to a traditional office setting. Rethinking the physical space may be one way to do this, with workers increasingly demanding design-led spaces, with the likes of Google and Amazon famously offering off-the-wall extras such as nap pods and even treehouse meeting areas. 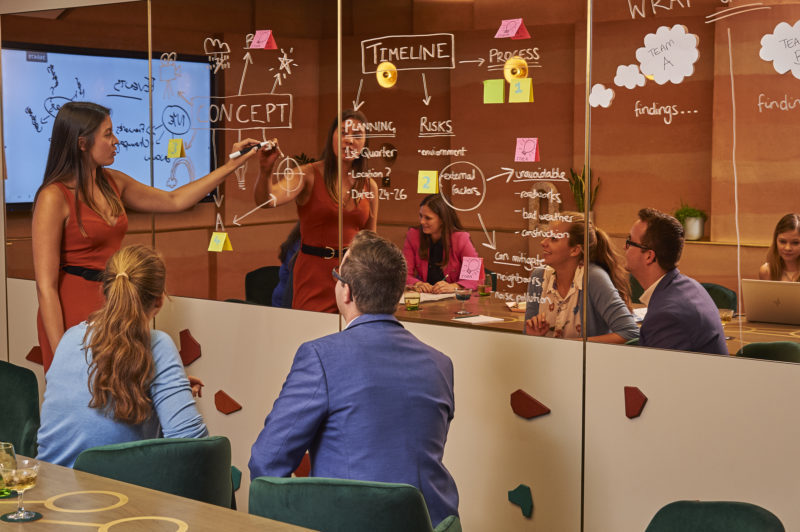 “I think that people are more used to higher quality of goods around them, whether that’s in architecture, or design object, or your mobile phone or even customer service. People expect a lot more…people do expect everything to be much more crafted and thought about.”

Be it a gimmick or a genuine productivity booster, there is clearly a demand for a reimagined work environment, and a move away from traditional office spaces. James believes that as well as functionality, the room incorporates another element often absent from corporate spaces:

“I think the most important thing about this room is it is fun. It’s not taking itself too seriously. And that’s the key for us with everything we do in the hotel. Let’s have fun…get up and use it and enjoy it.”