Not only does the mounting e-waste problem lead to contaminated waters, bring harm to wildlife and continue to pollute the atmosphere, but it also results in billions of dollars in lost value. According to a report by United Nations, the material value of the e-waste discarded each year amounts to $62.5bn – more than the gross domestic product (GDP) of most countries.

Hewlett Packard Enterprise (HPE), born out of the breakup of Hewlett Packard in 2015, sees a circular economy as a way not only to help our planet, but also to extract maximum value for its customers.

Verdict visited HPE’s Technology Renewal Center in Erskine, Scotland, to see how the company approaches e-waste, its reasons for doing so and whether its customers feel the same way.

HPE Financial Services launched its circular economy approach last year, which encourages its clients to minimise their energy use and maximise the lifecycle of their IT assets. This is encouraged through two initiatives: its asset leasing service, and its asset upcycling service, both of which operate through the Erskine plant.

The asset upcycling service is particularly important to HPE achieving its sustainability ambitions. Instead of sending unused equipment to landfill, HPE customers are encouraged to ship these assets back to HPE.

The 150,000 square foot facility serves as one of two management centres – the other being located in Andover, Massachusetts, the US – for the $13bn in IT assets that HPE Financial Services manages.

Some four million units – an abundance of laptops, servers, monitors and printers – passed through the centre in 2018, with an approximate value of £58m. 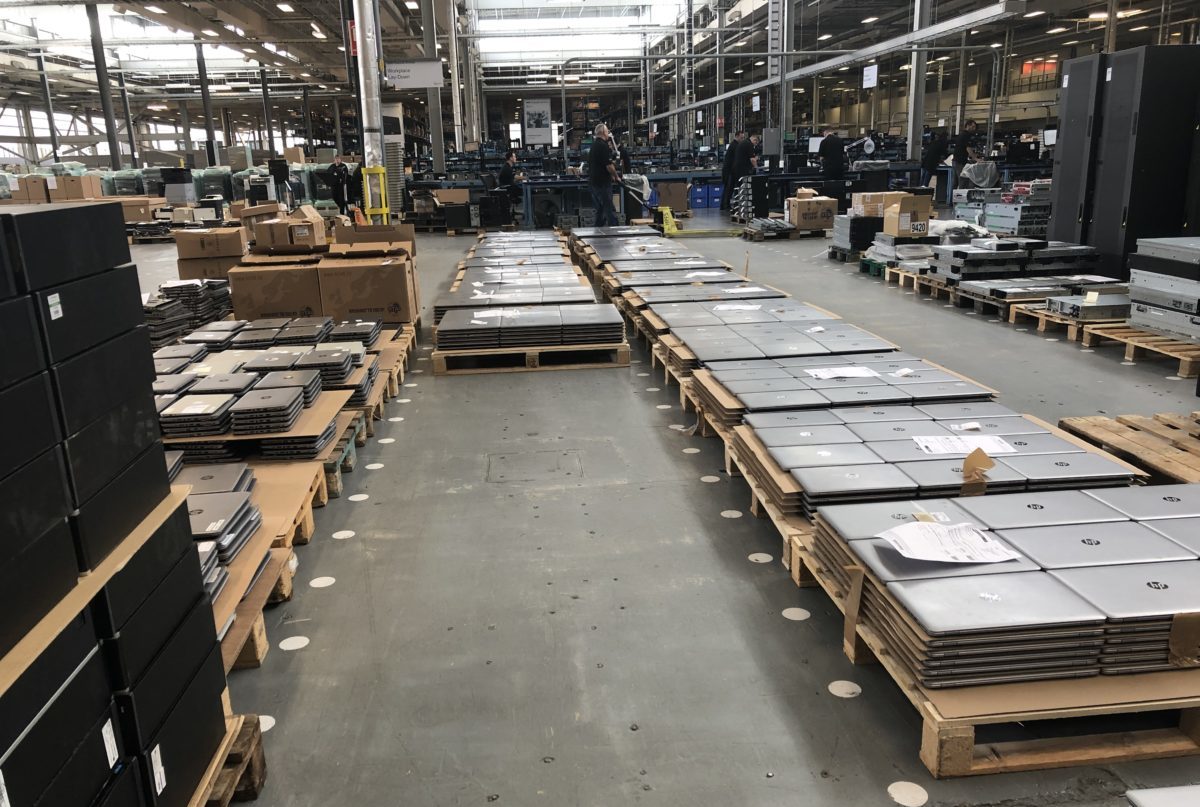 Of those four million units, 3.6 million or 89% were sold on. The remaining 11% was recycled, with any plastics and metals recovered and reused. Currently 0.4% of the material that enters the plant ends up in landfill.

While recycling is a better solution to e-waste than sending it to landfill, the point of the circular economy isn’t to encourage recycling. It’s about extending the life of electronics and ensuring that they stay in the economy for as long as possible.

“Reuse is certainly the best option – a much better option than recycling,” Chris Wallace, chief sustainability officer for HPE, said. “Recycling requires a lot of energy. If you can reuse those materials as a secondary source material, that’s great, but they still require lots of energy, so extending the life is key.”

In today’s privacy-conscious age, the Erskine plant has been designed with safety in mind.

A 2.2m fence lines the perimeter of the sorting facility and 26 CCTV cameras watch for any suspicious activity. Entering the facility requires an access control badge, and individuals need to be on an access list, controlled by its operations manager, in order to enter the sorting area. Employees at the facility must also be security cleared by the Ministry of Defence. 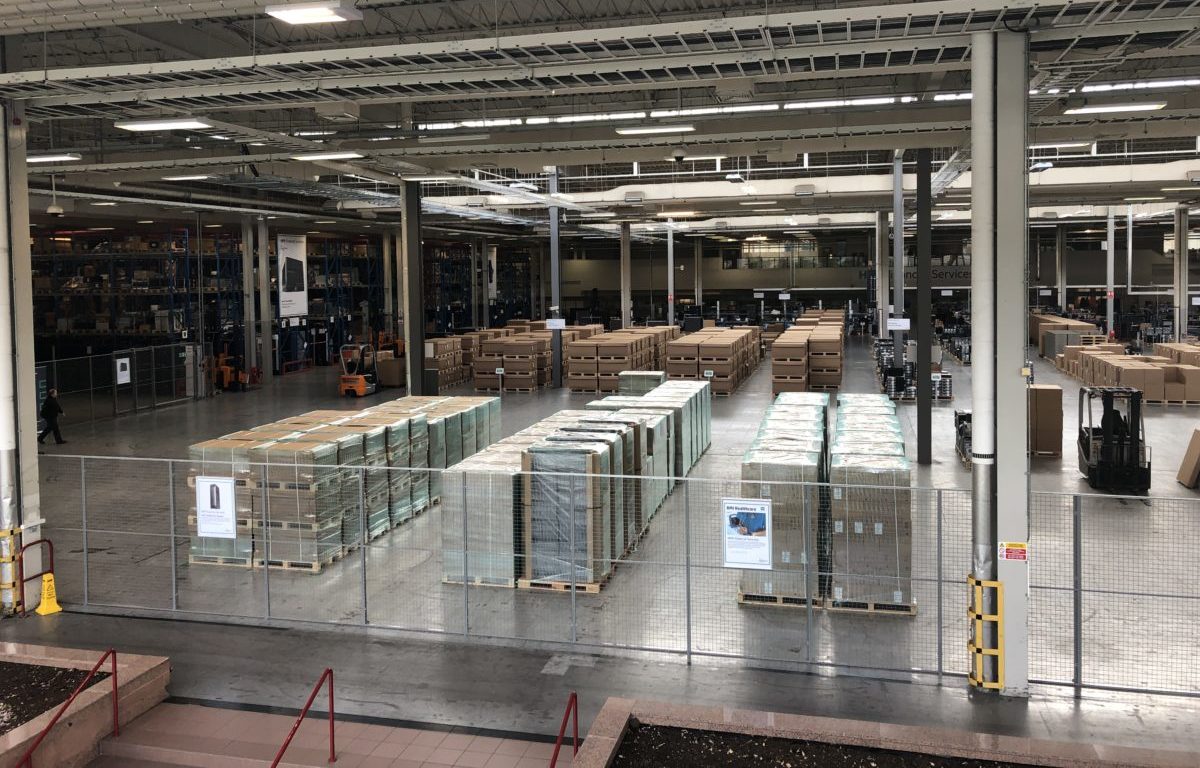 Rather than to keeping people out, these measures are in place in order to keep the equipment, and the data stored within it, in.

“That’s the biggest focus when we get the material in – that we really sanitise and kill the data as quickly as we can and efficiently as we can,” Jackie Rafferty, Technology Renewal Centre Operations Manager at HPE FS, explained. “We trust everybody in the building, but really want to control that and make sure that nobody can walk out there and take a laptop before we sanitise them.”

From the way that assets are delivered to the facility, to the stringent cleansing that each machine undergoes before it is sold on, security is a top priority at the Erskine plant. According to Paul Miller, HPE’s vice president of marketing, this care comes from the top. The company has invested heavily in security in recent years, with a particular focus on ensuring that security risks don’t find their way into its products.

“We actually build in security into our supply chain,” Miller explained. “About a year ago, there were a lot of threats that were being introduced in the manufacturing process. We scan every electronic part, even down to the power cords, to ensure that somebody didn’t put a part in there that could cause a security threat.”

HPE’s commitment to a circular economy approach mostly stems out of its desire to do good, and enabling its customers to do the same. Through HPE’s Circular Economy Report, organisations can get a better idea of the impact that their actions are having. The report details how much energy was saved as a result; how many CO2 emissions were avoided and how much waste was kept out of landfills.

However, HPE doesn’t shy away from admitting that a circular economy also makes good business sense, both for itself and its customers.

“Circular economy thinking really helps IT to meet both their business and sustainability targets,” Wallace explained.

Not only are those that make use of HPE’s upcycling services helping to prevent the creation of e-waste, but they are also receiving financial incentives for doing so. According to HPE, the company gave $330m back to its customers through its asset lifecycle initiatives in 2018, which provided these businesses with additional funds to spend elsewhere.

“We’re talking to customers on a daily basis. Quite frequently, what’s the one thing that’s stopping them from moving ahead and innovation? It’s just: do I have the money?” Gerri Gold, chief operating officer for HPE financial services, said.

Selling on legacy IT assets provides little challenge for HPE. The costs that come with migrating to new technologies often proves too costly or difficult for businesses. But by offering access to legacy equipment, HPE provides an accessible and trustworthy solution to those that need it.

“If they really want legacy, they’re going to get legacy. If the OEM [original equipment manufacturer] doesn’t address that, they certainly can go to the open market and acquire it,” Jim O’Grady, vice president of HPE Financial Services Global Asset Management, explained.

By doing it for itself, the company is able to keep its customers inside the HPE ecosystem. It also helps them to avoid purchasing counterfeit or unsecured assets.

Visiting the Erskine plant puts the sheer scale of the operation into perspective. Thousands of assets pass through its doors each day, and sorting, testing, storing and selling those items takes some work. But that work isn’t without reward. HPE Financial Services generated net revenue of $30.9bn in 2018, up 7% year-over-year, and profits of $2bn. Its asset lifecycle services, it said, contributed to that.

So not only is HPE helping to save the world, it’s making money – for itself and its customers – while doing so.

“So why are we focused on this? Heck, it’s important,” Gold said. “Nothing can be better than to be able to bring a solution that brings real business benefits and real benefits to our planet.”

Hey Siri! Tell me whether Nuance is actually worth $19bn. You should know

No longer in the dark: Darktrace confirms London IPO as revenue hits $200m