On 15 December 2017, there’s going to be just one film dominating the box office.

Star Wars: The Last Jedi is going to be a serious cinema event. It’ll be the magnitude of event that cinemas haven’t seen since 2015 when Star Wars: The Force Awakens came to cinemas and swiftly became the fastest film to gross $1bn.

And Disney are well aware of the fact that they’ve got a huge hit on their hands with Star Wars: The Last Jedi.

So much so, in fact, that they’ve laid down some very strict rules about screening the film for cinemas. Those rules have been so strict that some cinemas have threatened to boycott the movie entirely.

These strict rulings have put one independent film director, Gary Sinyor, on the warpath. The director took out a half-page advert in this week’s Guardian to send an open letter to Disney CEO Bob Iger begging for a place to screen his film. In it he writes:

Please can you release just one screen in Central London on the week of December 15 so we can show British audiences an indie British film.

Be afraid of us the Empire need not. 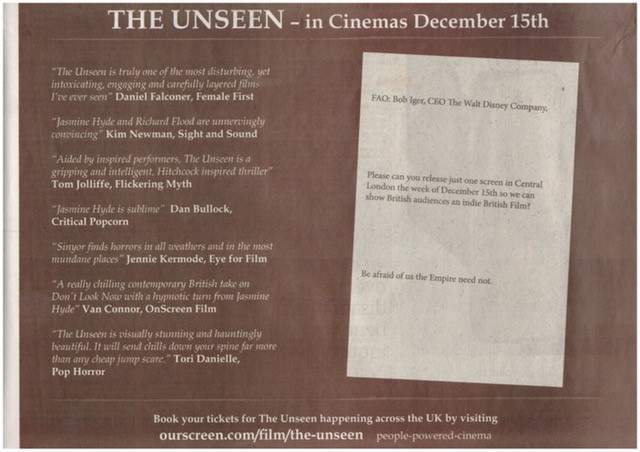 What are Disney’s demands of cinemas showing Star Wars: The Last Jedi?

The Wall Street Journal revealed earlier in the year that Disney are imposing some draconian rules on cinemas showing Star Wars: The Last Jedi.

For a start, Disney are demanding 65% of ticket revenue. Normally, this is split 50-50 between the cinema and the studio. Asking for an addition 15% will maximise Disney’s profits while cutting any takings cinemas can hope to achieve.

In addition, cinemas must commit to only showing Star Wars in their largest auditoriums for four weeks following the film’s release. For rural cinemas serving small communities in the US, this has been a dealbreaker. Many have announced a boycott of Star Wars. They argue that they simply can’t sustain only showing one film for four weeks.

There is also another mysterious distribution rule that, if violated will force cinemas to give a further 5% of ticket sales to Disney.

Essentially, all of this means that cinemas will have to show Star Wars constantly if they hope to turn a profit.

The Unseen vs. Star Wars

The disadvantage of this approach is that cinemas may not screen smaller films at all. For independent films and studios, this could be a disaster. These smaller films could just wait until 15th January to release their films but that would be equally as disastrous.

With awards season approaching and the cut-off for a lot of shows being 31st December, films need a release slot before then. Winning awards is often the only way smaller films can attract publicity and earn a profit at all.

With all that in mind, Gary Sinyor’s appeal should be no real surprise. His film The Unseen stands a great chance at independent awards show have been critically acclaimed by those audiences who have managed to see sneak previews of it.

Speaking about his appeal, Gary explained:

“The new Star Wars film is going to be not just in every cinema complex but also nearly screen and for nearly every performance. Disney’s terms were so strict that American cinema chains threatened to boycott it. One small screen in Central London would have a negligible effect on them but means a huge amount to an independent British feature film. With such outstanding reviews for The Unseen a direct appeal to the head of Disney to release a screen was the obvious thing to do.”

Considering the film is from an entirely British team, it is something of a shame that it can’t get a screening in the capital of its own home country.

What is The Unseen about?

“Gemma (Jasmine Hyde) and Will (Richard Flood) are shattered when their son dies in an accident. Gemma blames herself and starts to have panic attacks that affect her eyesight – and the audience’s point of view. Will, tormented, believes he is hearing his son’s voice calling out to him. Gemma, helped by ex-pharmacist Paul, tries to stop her panic attacks with medication. To escape their grief, Gemma suggests they take up Paul’s (Simon Cotton) offer to stay at his Lake District country getaway.  Will, unable to hear to his son in his bedroom back home, antagonizes Paul and suddenly goes home. Gemma is now reliant on Paul who appears to be developing genuine feelings for her welfare. Love, grief, and the frailty of the human condition are all brought to the fore as Gemma, Will and Paul are caught up in a descent into violence, both psychological and ultimately physical.”

Will Disney offer a lifeline to Sinyor on this issue or will The Unseen go unseen by audiences? The latter seems most likely, but who can say?

After all, with Star Wars‘ past successes, they’ll have a behemoth hit on their hands either way!