There are more than twice as many millionaires under the age of 35 – so-called millennial millionaires — in the US than in any other country.

In total, the US takes seven of the top 20 spots, with only China featuring in the top 20 more than once.

The ranking – the first time millennial millionaires have been calculated – suggests which cities are attracting the most young millionaires and are likely to grow in importance in coming years.

The ranking also sheds light on which cities are made up of older millionaires.

Read more: Which cities around the world have the highest density of millionaires?

The ranking was compiled using data from GlobalData WealthInsight and its head of research Oliver Williams said:

The west coast of the US features highly on this list thanks to the tech start-up culture found around Los Angeles, San Jose, San Diego and San Francisco. These areas are also home to some of the world’s largest companies, offering big pay packages for skilled millennials. However, with recent accusations of ageism in Silicon Valley, some might question whether their position here is a good thing.

London is home to far more millennial millionaires than its European rivals Paris and Rome. This is as much down to its entrepreneurial economy as the City’s financial clout. Its nearest rival, Shanghai, has less than a third of London’s millennial millionaires, affirming position of these top three cities for years to come.

Riyadh and Mumbai are financial capitals of countries with extremely young populations so we can expect to see them climb the ranks as more millennials earn their millions. For the same reason Tokyo, which has the largest total population of millionaires, does not feature on this list. Japan has the oldest population of any country. 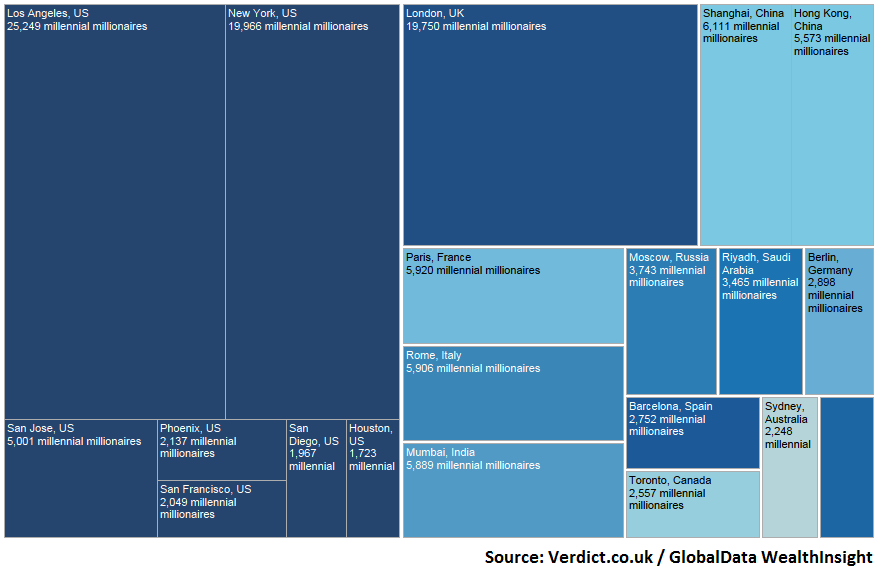