Despite the success of new consoles such as the Nintendo Switch and falling prices of innovative tech like virtual reality, it was mobile gaming that dominated digital sales in 2017.

Of the $100.5bn that players spent on digital games last year, 59 percent of revenue was generated through mobile. According to video game researchers SuperData’s Year in Review report, gamers spent $59.2bn in total on mobile last year.

This marks an increase of 31 percent in the mobile market from 2016 to 2017, with consumers spending an additional $14bn on mobile games.

However, the Asian market generates the vast majority of this total revenue. Up $10bn on 2016, digital game sales surpassed $36bn in the region last year. In comparison, mobile gaming made $9.1bn in North America and $5.9bn in Europe.

Much of the $36bn comes from China, where the mobile market is particularly large and willing to spend.

This is due to the country’s 15-year ban on video game consoles, which were deemed as a means of spreading politically sensitive content.

The Chinese government eventually lifted this ban in 2015. However, the market has held strong.

SuperData’s 2017 report attributes this to “a legal, cultural and brand-name advantage” of Chinese tech companies such as Tencent and NetEase, who are heavily invested in the market.

Between them, Tencent’s Arena of Valor and NetEase’s Fantasy Westward Journey, the mobile market’s two biggest titles, generated $3.4bn in revenue. That equates to almost 10 percent of all mobile gaming revenue in Asia. 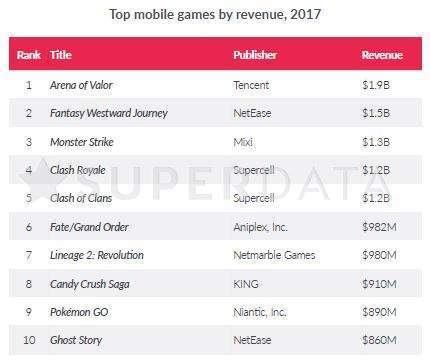 Free-to-play games make the most

Giving your product away for free might not sound like a very good business model, but for video game developers it is one that has worked wonders.

Players are able to download and access free-to-play games without paying. However, developers usually monetise these titles, otherwise known as “freemium” or “pay-to-win” games, by offering extra content that users can purchase to speed up their progress or make the game easier to play.

Only a small amount of users actually do. A 2014 report found that just 2.2 percent of users pay for additional content on free-to-play games.

However, those that do pay generate developers a huge amount of revenue. According to SuperData’s report, free-to-play titles generate 89 percent of revenue in the mobile and PC markets.

For example, popular free-to-play online shooter CrossFire made developers Nexon and Tencent $1.4bn through microtransactions in 2017. On the other hand, Blizzard’s hugely popular shooter Overwatch recorded $382m in sales. 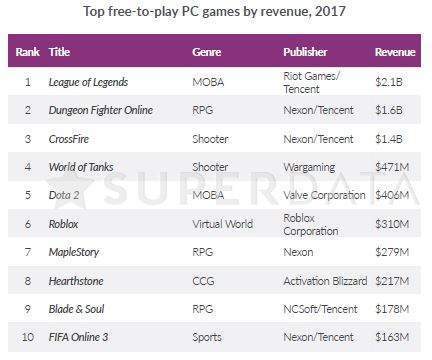