The new device sold 12m units in the first nine months of its sales. In the final quarter of 2017 alone, Nintendo sold 7.23m units of the Switch, receiving a major boost from the holiday season.

The company’s president, Tatsumi Kimishima, said at an earnings briefing:

Switch sales during the holiday season were stronger than expected in Japan, the United States and Europe.

Earlier this month, Nintendo reported that the Switch has become the fastest-selling home console in the US. It has now raised its sales forecasts from 14m to 15m for the device to the end of March 2018, its first full year on sale.

During the final three months of 2017, the company reported revenue of $4.4bn, compared to analyst forecasts of $3.7bn. This calculates to a more than 177 percent year-on-year rise. Nintendo reports this was its highest quarterly revenue figure since 2009.

Nintendo’s operating profit for the final quarter of last year was $1.07bn, up 261 percent year on year.

How are Nintendo shares reacting to the profit increase?

Nintendo shares are up 2.4 percent this morning following the news. Overall, the company’s share price has risen over 107 percent since January 2017. 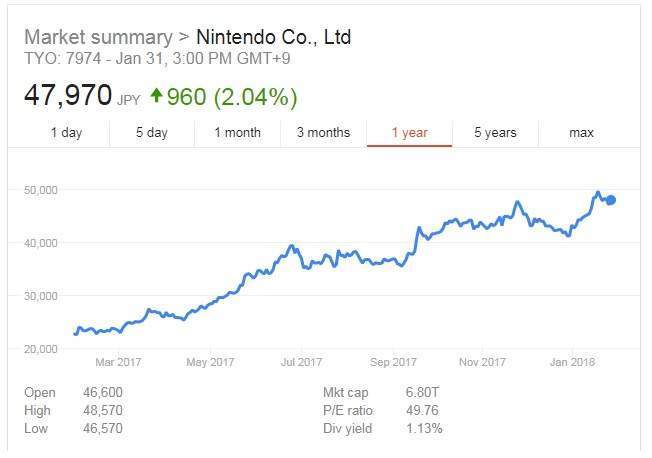 The Switch has been a prize winner for Nintendo. However, this isn’t so surprising given its strength in the handheld device market. For instance, the Nintendo DS is the second best selling console of all time.

It is still a good moment for Nintendo, as one of its most recent consoles, the Wii U, did not deliver. The Wii U was on sale for five years but only managed to shift 13.56m units, less than the Switch has managed to achieve in nine months.

And it’s not just the Switch that has pulled through for Nintendo. Super Mario, the beloved Italian plumber, was at the top of Nintendo’s game sales.

The company shifted 9.07m units of Flagship Super Mario Odyssey and 7.33m units of Mario Kart 8 Deluxe in the final quarter of 2017.