A huge store estate generating dwindling sales usually spells impending retail disaster, but for Next, stress testing and relative transparency paints a convincing argument that it will survive long after many of its midmarket rivals collapse.

On the face of it, it wasn’t the most inspiring of updates from Next – store sales for the year fell 7.9% on a poor comparable of fall of 2.9%, and are forecast to fall even further.

With 528 stores, you’d think investors would start to get the jitters. And yet, shares climbed 8% on the day. Next’s share price has managed to hold up over recent years in the face of Amazon’s onslaught on the high street. 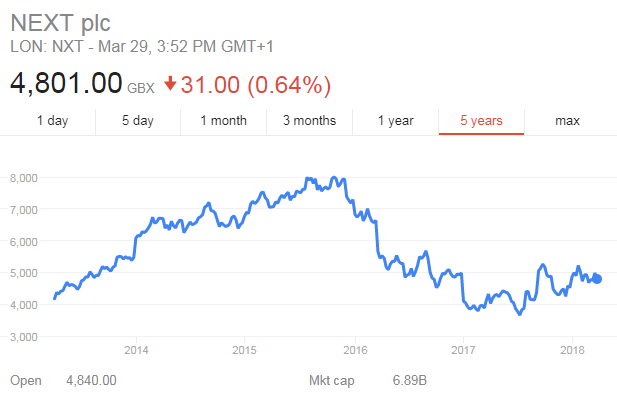 Part of this reaction can be explained by the impressively robust and detailed defence Next gave of the viability of that store portfolio.

It showed that should like-for-like store sales fall by 10% every year for the next 15 years, Next would still have a cumulative £86m generated in cash from stores.

This is on the assumption that it exits unprofitable stores as leases expire – 240 of Next’s leases are up for renewal in the next three years – and that when profitable stores reached the end of their leases it could continue trading while paying the same rent.

Base scenario: Next like-for-like sales down 10% over 15 years

Admittedly, the reasoning does show that stores would start to burn cash from 2021 onward, but it also shows that Next will generate enough before then to see it through.

This scenario also does not account for the reverse-cannibalisation effect of shutting stores that are near other stores, the likelihood of rents falling when up for renewal, and the benefits of interest income from the use of online credit accounts to purchase in stores.

If these are factored in, Next forecasts that its cash contribution from stores would total £431m by 2031.

Stores begin to become cash negative in 2022 in this second scenario, but other benefits of the store are still not factored in.

These include online sales which occur only because the customer had already browsed the item in store or can pick it up in store, the positive effect of knowing that there is a store nearby should there be any problem with an online purchase, and the marketing effect of having stores to keep the brand front of mind for online shoppers.

While the latter two are difficult to pin down, a GlobalData report last year estimated that if online clothing and footwear sales collected or previously browsed in store were counted as store sales, this would increase store sales by 11.4%.

It is interesting that Next chose to use a 10% annual sales reduction in this year’s store forecasting, but used scenarios of 2%, 4% and 6% annual declines in similar analysis last year, as it appears to accept that the outlook for physical retail is far worse than it previously thought.

As online sales rise and the overcapacity of physical retail becomes ever more apparent, Next at least has put forward a detailed defence of its heavy physical position.

We doubt that its rivals would dare publish similar detail, though investors should pressure them to do so.