British clothing retailer Next has announced an 8% fall in annual profits in what it has described as its toughest period in 25 years.

The company said pre-tax profits dropped to £726 million ($1 billion) in the year ending January 2018, which, despite being slightly above its central guidance of £725 million, is a considerable fall from the £790 million made in 2016-17.

The company also said that a “weak clothing market” and some “self-inflicted product ranging errors and omissions” were to be blamed.

In many ways, 2017 was the most challenging year we have faced for 25 years. A difficult clothing market coincided with self-inflicted product ranging errors and omissions.

At the same time, the business has had to manage the costs, systems requirements and opportunities of an accelerating structural shift in spending from retail stores.

Next maintained its guidance for 2018-19, with a 1% growth in full price sales and a fall in pre-tax profit by to £705 million, but also forecast a 1.4% rise in earnings per share.

The Next share price has climbed, however, with investors pleased by its better-than-expected performance and its planned investment in in-store experiences. 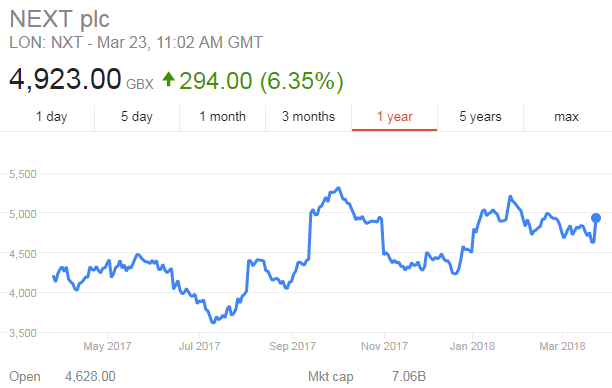 Richard Hunter, head of markets at Interactive Investor, said Next was going through “tough times”.

Next has given itself a mountain to climb over the coming year and it remains to be seen whether the improvements are achievable.

The company said it is expecting in-store sales to decline, with customers shifting to online, and that it is exploring solutions.

These include closing some locations, as well as adding new services to its stores, such as a florist, a prosecco bar, a restaurant, a children’s activity centre, a café, a card and stationery shop and a barber.

Next also said it is considering to add a spa operator and bridal-wear concession to its Arnadale Centre shop in Manchester, expecting such steps would add £800,000 worth of income to the shop.

In the year ahead we currently plan to open 98 concessions across our store portfolio and expect to generate annualised income of around £5 million from these concessions.

Despite expecting profits to fall again in the 2018-19 financial year — with costs rising, sales further falling and the clothing market struggling — Next said it will see improvements in the coming months.

Although official data showed a fall in the UK inflation and growth in wages, spending in the UK seems to have shifted from clothing towards leisure and has resented from the economic uncertainty caused by Brexit.

“The middle market is suffering and there isn’t a way back home,” Kate Hardcastle, from consultancy Insight with Passion, told the BBC.

I think retail generally in this marketplace has been quite lazy. As soon as consumers had an alternative option that are perhaps are a better price, better product or faster moving product, I think they’ve taken it.

So you’ve seen the rise of Primark on the discount side, Asos and Zara on the more fashion-orientated side and a consumer very much influenced by Instagram and social media.