However, he is still some way off of matching Roger Federer, who won his 20th Grand Slam earlier this year with victory at the Australian Open, or Margaret Court, who won 24 Grand Slam titles during her two decade stint at the top of women’s tennis.

Regardless, after overcoming his two-year barren spell in which he failed to make a Grand Slam final throughout 2017, Djokovic has cemented his place as one of the greats of the modern era with his latest victory.

Verdict looks back at the rise of Djokovic and how much it pays to be one of the stars of the sport.

According to sports market intelligence company Sportcal, Djokovic has worked with some of the biggest brands in the sports and luxury industries.

Djokovic has partnered with 12 brands across eight different industries.

Djokovic doesn’t come close to matching the endorsement earnings of Swiss star Federer. Verdict estimated that he would make $100m in 2018 after signing a $300m deal with Japanese fashion brand Uniqlo.

However, Djokovic is still an attractive option for brands hoping to put their product in front of a large audience of tennis fans.

Head has served as Djokovic’s official supplier since 2001, before he had even turned pro. An initial $1.5m annual deal became $7.5m this year, as the star agreed to re-sign with the brand for a fourth time.

Likewise, a deal with Asics, which provides the athlete with footwear to wear while on the court, is worth an additional $4m each year.

Japanese watch brand Seiko has also paid him $5m each year since 2014 to serve as the brand’s global ambassador.

However, Djokovic’s most lucrative deal is with Lacoste. The fashion brand pays approximately $9.4m (€8m) annually to serve as his kit supplier. As part of the deal, Lacoste has released a range of Djokovic branded attire, known as the Novak Djokovic collection.

According to Sportcal, Djokovic makes $25.9m annually from his endorsement deals.

Sponsorship vs sport: A breakdown of Djokovic’s earnings

Djokovic has consistency earned above $25m annually since 2013 according to Forbes’ annual World’s Highest-Paid Athletes list. However, his earnings took a hit in 2017 as he struggled to make it to the later stages of the year’s biggest tournaments.

Djokovic is guaranteed to earn millions regardless of how he performs, at least for the next few years. Going by Forbes’ numbers, 66% of the tennis star’s income has come from endorsements in the last six years.

With victory at Wimbledon, Djokovic’s earnings will like climb again in 2018. Winning Wimbledon comes with a $2.25m prize.

However, it will take some doing to make his peak earnings of $55.8m in 2015. That year Djokovic claimed three of the four Grand Slam titles at the Australia Open, Wimbledon and the US Open. Such a strong showing on the court earned Djokovic a total of $21.8m in tournament winnings.

What do Djokovic’s sponsors get in return?

Sponsors spend millions of dollars every year to endorse one of the biggest names in tennis. However, they get more than their money’s worth out of Djokovic.

With a social media following of more than 19.7 million fans, which have generated close to 50 million interactions and video views in the past 12 months, Djokovic offers sponsors access to a huge pool of engaged sports fans. These potential customers help to pay back a large portion of the money that sponsors invest. 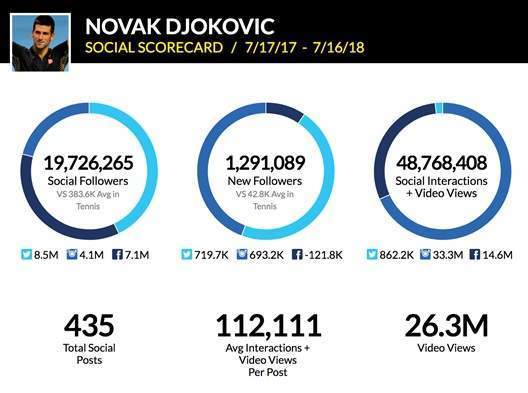 According to data provided by sponsorship intelligence tool Hookit, since May last year, sponsored posts advertising Lacoste posted on Djokovic’s social media profiles generated a total of $5.1m in value for the brand. Coupled with the revenue brought in by Djokovic clothing line, Lacoste likely makes a considerable amount of profit on their $9.4m outlay.

According to Hookit, the average sponsored post on Djokovic’s social channels generated $83,000 in value for sponsors.

Even tournament organisers benefit from Djokovic’s social media following. According to Hookit, Djokovic posted about Wimbledon 25 times since July 2017. This generated $2.8m worth of value for the event and its organisers, which is more than he was paid for winning the tournament.

Novak Djokovic net worth: How much has he made so far?

He has consistently earned more than $20m annually since 2012. Judging by his showing at Wimbledon, he has at least a few more years at the highest level, so the income will continue to roll in for the Serbian star.

Aside from tennis, Djokovic also earns through his chain of restaurants, Novak Café & Restaurant, which has eateries across major cities in his native Serbia.

Likewise, he also owns Family Sport, a sporting event and catering company, which is ran by the Djokovic family. Family Sport was behind the Serbia Open, an ATP tennis tournament that ran from 2009 to 2012.

Going by Forbes’ estimates, Djokovic has earned over $200m throughout his time in tennis.

Djokovic isn’t as flashy with his wealth as many of his fellow professional athletes and, for the most part, he has managed to save much of his earnings.

Celebrity Net Worth estimates the Novak Djokovic net worth at $180m. This figure has also been reported by the Daily Mail and Daily Express.