A recent report from Sage showed that most of the world’s unicorn startup founders attended Stanford and Harvard University in the US.

However, Oxford University in the UK has produced so of its own startup founders and holds the title for producing more unicorns than any other university in Europe.

Here are Oxford’s alma mater that have gone on to create tech companies valued at $1bn or more. 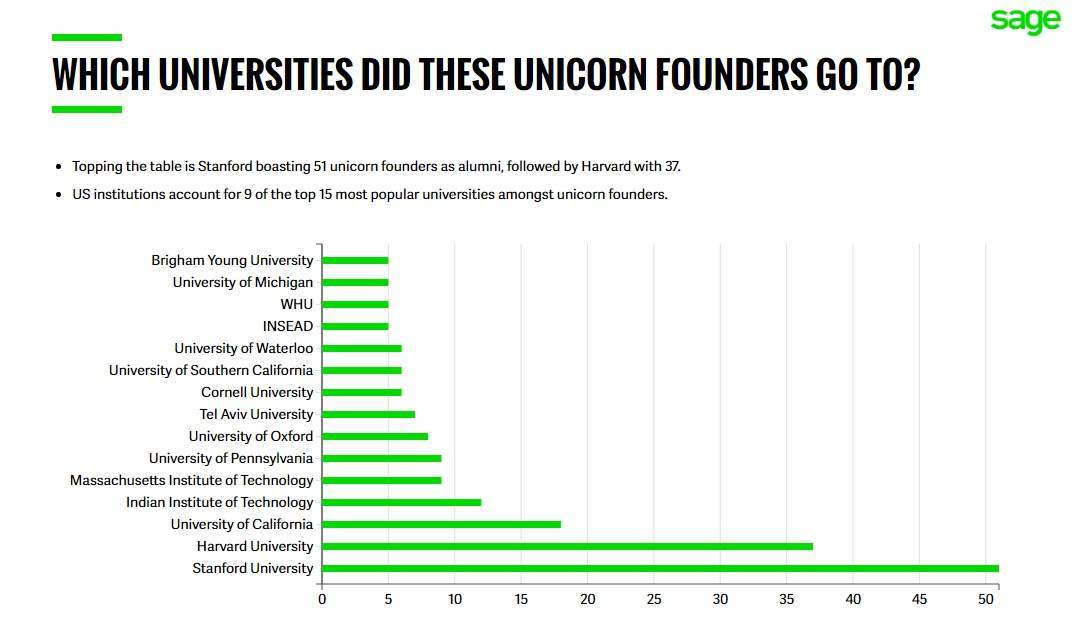 Sage analysed which university produces the most unicorn co-founders

Morse was part of a group of four, including Fatoumata Ba, Aneesa Arsahd and Joe Falter, that founded the Africa Internet Group (AIG) which became Africa’s first tech unicorn in March 2016.

AIG was founded in Nigeria in 2012, as an accelerator for African startups. Its network of companies includes the continent’s biggest online retailer, Jumia, and online food delivery service Hellofood.

Morse got a masters degree in politics from Oxford in 2011.

Gould set up Anaplan back in 2006, as a cloud-based software business to encourage companies to ditch spreadsheets.

Even though the company’s headquarters are now in San Francisco, Gould splits his time by dividing research work between the US and York, where he set up the company and where his family is based.

Anaplan reached unicorn status in January 2016, after announcing a $90m round of funding. He studied mathematics and an MSc in computation at Oxford.

After launching in 2013, its aim has been to bring humans and machines together to drive discovery in bioscience, human health and the tech sectors.

Griffin, who holds a D.Phil in cognitive neuroscience from Oxford, is vice president of business development for the unicorn.

Butcher studied an MA in ancient and modern history at Oxford, before becoming co-founder of the augmented reality (AR) app, Blippar.

The app works by connected brands with customers using images, such as triggering a game from a picture of a chocolate bar.

Blippar says more than 65m people in 170 countries use the app, and it was ranked ninth in CNBC’s global Disruptor 50 list in 2106.

Fintech startup Funding Circle, a peer-to-peer lending marketplace, is one of the UK’s most well-known unicorns.

It’s so big in fact, that one of its co-founders and global CEO, Sami Desai, was awarded a CBE in the New Year’s Honours list in 2015.

Desai studied at Oxford, where he met James Meekings, one of Funding Circle’s other co-founders and the startup’s current UK managing director.

Meekings studied economics and management whilst at university.

US entrepreneur Kevin Hartz founded the ticketing platform EventBrite with his wife Julia.

He got an MA from Oxford University before going on to create Xoom, which was sold to PayPal in 2015, and ConnectGroup, as well as the unicorn EventBrite.

Hartz has served as an adviser to other startups including Airbnb and Uber.

The Californian-born chief exec studied at Stanford University before earning an MA in philosophy from Oxford.

Hoffman founded LinkedIn, the professional networking site, in 2003, before selling it to Microsoft in 2016 for $26.2bn.

As well as remaining as executive chair for the company, he is also an angel investor, with investments in Airbnb and the restaurant management software, Upserve.