For the first time in history, scientists have successfully taken a photo of a type of quantum entanglement known as Bell entanglement, which Albert Einstein famously described as “spooky action at a distance”.

Quantum entanglement is essential to the field of quantum mechanics and is enabling the development of the emerging field of quantum computing, as well as being used in some forms of cryptography.

It occurs when two particles, such as photons, interact with each other – for example, when passing through a beam splitter.

In some cases they can remain connected even when they are physically separated. This means they share their physical states, regardless of how far apart they are – a phenomenon known as quantum entanglement.

Einstein first observed the unusual behaviour in 1935, although he did not coin the term quantum entanglement himself, instead describing the process, which appeared to contradict parts of his theory of special relativity, as “spooky”.

The concept was formalised and more thoroughly tested by Sir John Bell, from which the name Bell entanglement comes.

While his rigorous research has enabled the process to used in practical applications such as quantum computing, until now no one had ever been able to capture an image of it occurring. 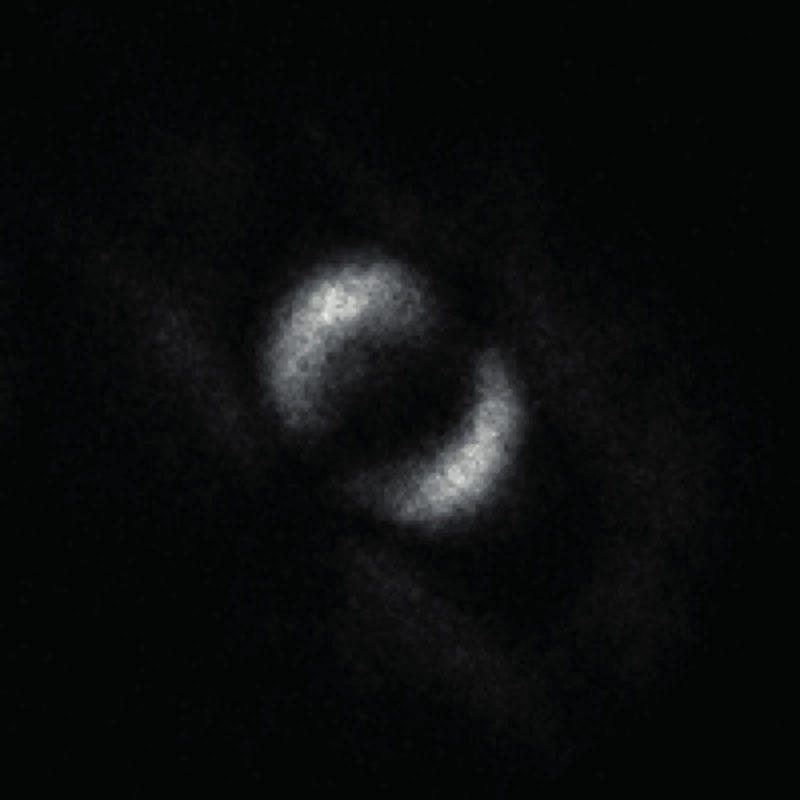 The photo provides a visible record of photons in their entangled state.

How the quantum entanglement photo was taken

The quantum entanglement photo was captured by physicists at the University of Glasgow’s School of Physics and Astronomy, lead by Dr Paul-Antoine Moreau.

While it may not appear remarkable to the untrained eye, the image is a revelation for the scientific community, because it creates a visible record of photons in their entangled state.

In order to achieve the feat, Moreau and his colleagues had to develop an entirely new method of photography, the details of which are explained in a paper published today in the journal Science Advances, entitled ‘Imaging Bell-type nonlocal behaviour’.

There are two parts to this: setting up the photons – the subject of the image – in a way that allowed their state of quantum entanglement to be captured, and then selecting equipment powerful enough to capture it.

The first part involved creating a system that fired entangled photons from a quantum light source. This was directed at what are known as ‘non-conventional objects’, hosted on liquid-crystal materials. These change the phase of the photons as they pass through them, creating the occurrence the physicists wanted to capture.

The second part involved setting up a camera so sensitive that it could capture single photons in such a way that it would only take the image when both the photon and its entangled twin were in frame.

“The image we’ve managed to capture is an elegant demonstration of a fundamental property of nature, seen for the very first time in the form of an image,” said Moreau.

“It’s an exciting result which could be used to advance the emerging field of quantum computing and lead to new types of imaging.”