Following the issuance of one-year 5G test and trial licenses in March 2020 by the Kenyan regulator to five mobile operators, telco Safaricom launched 5G commercial trials for consumers and businesses on March 26, 2021. The launch centers on the capital Nairobi and includes Kisumu, Kisii and Kakamega.

Safaricom, in partnership with both Nokia and Huawei, intends to expand the trial to 150 sites across nine towns over the year-long trial. The trial is primarily focused on testing the efficacy of 5G in Kenya with targeted speeds of up to 700Mbps and 1Gbps to follow later in the year. While the trial is primarily mobile-centric at the time of writing this report, the telco is expected to supplement its limited fixed fibre-optic coverage with 5G fixed wireless access (FWA) where possible in the future, with the opportunity to leverage fixed-mobile convergence.

The move towards 5G is in line with Safaricom’s wider mobile data connectivity strategy. The telco aimed to double its 4G sites to almost 5,000, covering every town and 80% of the population in Kenya, completing this goal in March 2020. Safaricom largely focuses on data package sales to gain market share across their targeted segments. As reported in GlobalData’s Country Intelligence Report, Safaricom is the market leader in Kenya and accounted for a 63.8% share of total mobile subscriptions in 2020, followed by Airtel Kenya with a 26.1% share, and Telkom Kenya with a 5.7% share. 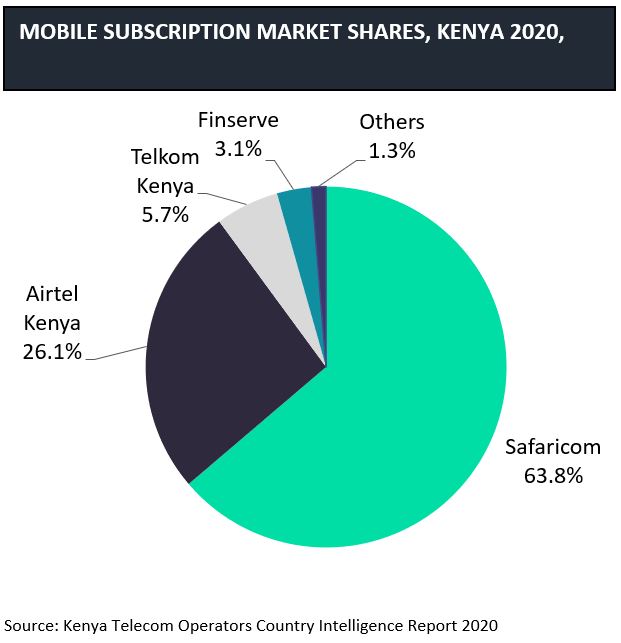 The operator stands to gain from the simultaneously increasing popularity of mobile data heavy applications, such as social media and OTT video; as well as the increasing uptake of mobile payments services (Safaricom acquired mobile payments provider M-PESA from Vodafone in April 2020). Most importantly, Safaricom will benefit from the increasing uptake of smartphones as customers subscribe to bundled smartphone data packages.

Being the first mover to 5G in Kenya will drive opportunity for Safaricom to differentiate from its competitors, Safaricom can leverage being the only operator offering 5G technology to promote an unmatched 5G value proposition, in mobile at first and potentially in the 5G FWA space in the future.