Business software provider Salesforce has signed a definitive agreement to acquire work communications platform Slack for $27.7bn in a significant reshuffling of the enterprise software market.

At first glance, the two companies might seem like an odd match. Salesforce provides a suite of applications to help sales teams manage their relationships with clients. Slack is a channel-based messaging platform where employees discuss work, collaborate and exchange GIFs.

But on closer inspection, the two companies have much in common and complement each other in a number of ways.

First, both Slack’s and Salesforce’s underlying focus is the future of work. When Slack launched in 2013 it was boldly described as “killing email”. Five years later and email remains alive and well, if perhaps a little bruised by Slack.

The company has helped reshape the way that work is done, spurring rivals such as Microsoft and Google into developing their own competitor products.

Meanwhile, Salesforce has built up an arsenal of software tools designed to improve the way that sales and marketing teams carry out their roles. Both are cloud-based, software as a service (SaaS) companies.

“This is a match made in heaven,” said Marc Benioff, chair and CEO of Salesforce in a statement late on Tuesday that confirmed a week of speculation. “Together, Salesforce and Slack will shape the future of enterprise software and transform the way everyone works in the all-digital, work-from-anywhere world.”

A “new operating system” for work

The acquisition will see Slack become the new interface for Salesforce Customer 360, a move that could reimagine the way enterprise software tools are designed and used.

“This isn’t just about the future of collaboration. This is a new ‘operating system’ for how knowledge workers will interact in the future, connecting the front office, back office, and customers all together in a single platform,” says Aaron Levie, co-founder and CEO at content management company Box, in a blog post.

The way we work – increasingly digital and in distributed teams untethered from the office – has been accelerated by the coronavirus pandemic. As such, employees have become more dependent on collaboration tools to carry out their jobs, driving up the use of tools like Slack and Zoom.

Slack use surged when much of the world went into lockdown in March, adding 2.5 million simultaneously connected users in just 16 days. Since then its popularity has continued to soar.

And even as promising vaccines look set to allow offices to fully reopen next year, many are expecting remote working to remain for the long term.

This helps to futureproof Slack’s appeal. Many companies that used it for the first time this year are likely to continue doing so beyond the pandemic and Salesforce’s investment is a big bet on this future.

Slack has struggled to convert

However, Slack has struggled to convert its success into profits. The company operates with a freemium model, with paying subscribers getting additional features such as the ability to automate repetitive tasks in Slack workflows.

Some had questioned whether the company could ever become profitable if it couldn’t do so at a time when user numbers have risen so dramatically. Being acquired by Salesforce removes much of this pressure and provides other opportunities in the process.

“Salesforce’s acquisition of Slack would provide the company the much-needed support to continue adding enterprise customers,” says Sapana Maheria, practice head of thematic research at GlobalData, an analytics company that predicted Salesforce would acquire Slack back in April. 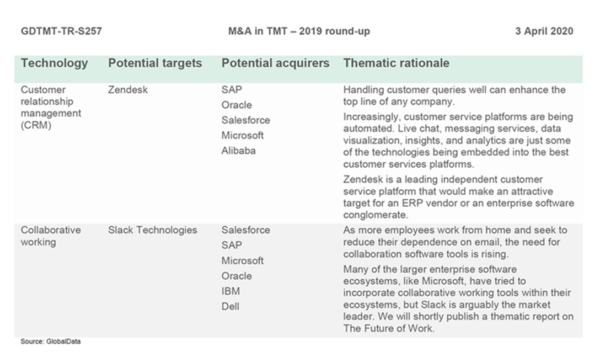 He says that Salesforce’s acquisition of Slack “makes sense for large companies with high numbers of desk-bound employees”.

He adds that “these knowledge workers are used to complex tools and their IT teams regularly spend money on expensive software. This deal will help Slack sell into those companies.”

Uniting Salesforce and Slack has advantages for both companies in the fiercely competitive enterprise software market. And both firms have a mutual rival – Microsoft.

Salesforce and Microsoft have been driving forces in the industry’s largest software acquisitions and both were pioneers of the SaaS model. In 2016, Salesforce lost out to Microsoft in a bid to acquire professional social network LinkedIn.

Meanwhile, Slack has faced stiff competition from Microsoft’s own business communication platform, Microsoft Teams. Launched in 2017, the application has also seen a surge in users during the pandemic.

In May, Slack CEO Steward Butterfield said that “Microsoft is perhaps unhealthily preoccupied with killing us, and Teams is the vehicle to do that”.

This rivalry became more than words in July when Slack filed an antitrust complaint against Microsoft over the way it integrates Teams into its Office software.

But with Slack taken under Salesforce’s wing, it can be protected by its deeper pockets and greater resources.

“If Slack are to successfully compete, they need to join an open ecosystem for collaboration,” says Matthew Hodgson, CEO of Element, a secure collaboration platform.

“Thankfully, Salesforce is pragmatic when it comes to integrating with third parties, given the broad range of systems it integrates with.

“Hopefully, Salesforce will help Slack understand the importance of interoperability with other messaging platforms to foster competition and empower users to choose their preferred chat service, rather than being locked-in to a single vendor.”

It will also help Salesforce to compete with Microsoft, says GlobalData’s Maheria.

“For Salesforce, a key attraction is Slack‘s messaging capability, which complements its own existing collaboration tool capabilities and will allow it to compete more directly with others, especially Microsoft,” she says.

Acquisitions have become a key business strategy for Salesforce. Last year it bought data visualisation software company Tableau for $15bn in one of the largest recent technology deals.

“As organic growth of its CRM market leadership slows, acquisition has been a core engine for revenue growth and innovation,” says Stephen Kelly, chair of Tech Nation.

“Salesforce has done multiple innovation acquisitions, as well as buying companies with customer bases in adjacent markets. The acquisition of Slack reflects all of these basic drives and is an increasingly strong offer as the coronavirus pandemic forces workers to adopt new forms of communication and collaboration software, putting this at the heart of daily life for office workers.”

The $27.7bn paid to acquire Slack is the largest in Salesforce’s 21-year history. It’s also a 55% premium to the value of Slack shares before news of the deal emerged last week. This will not help Salesforce’s recently earned reputation for paying premiums during acquisitions.

“While there are compelling merits to the deal, Salesforce paid a substantial premium. The return potential is higher with the use of more debt, and it limits dilution to current shareholders,” says Logan Purk, senior research analyst at Edward Jones.

“This deal also feels like Slack throwing in the towel in competing with Microsoft,” he adds.

However, he also believes that folding Slack into Salesforce will give Slack “a much larger user base and wider adoption”.

“This acquisition makes the Salesforce platform that much more compelling to customers, increases cross-selling potential, and further increases customer retention.”

The Salesforce-Slack deal is expected to close in the second quarter of fiscal year 2022.