Snapchat’s new Spectacles is the latest confirmation of the social media giant’s commitment to become a leader in augmented reality.

The new fourth-generation frames have a slightly more futuristic look than the first version of Snap Spectacles released back in 2016. Snap is the owner of Snapchat.

Instead of bright colours and playful curves, Snapchat’s new Spectacles are designed with slick, strict, straight lines and are only available in black. Imagine a pair of sunglasses sitting somewhere between Cyberpunk 2077 and The Terminator and you get the idea. Out with the old: 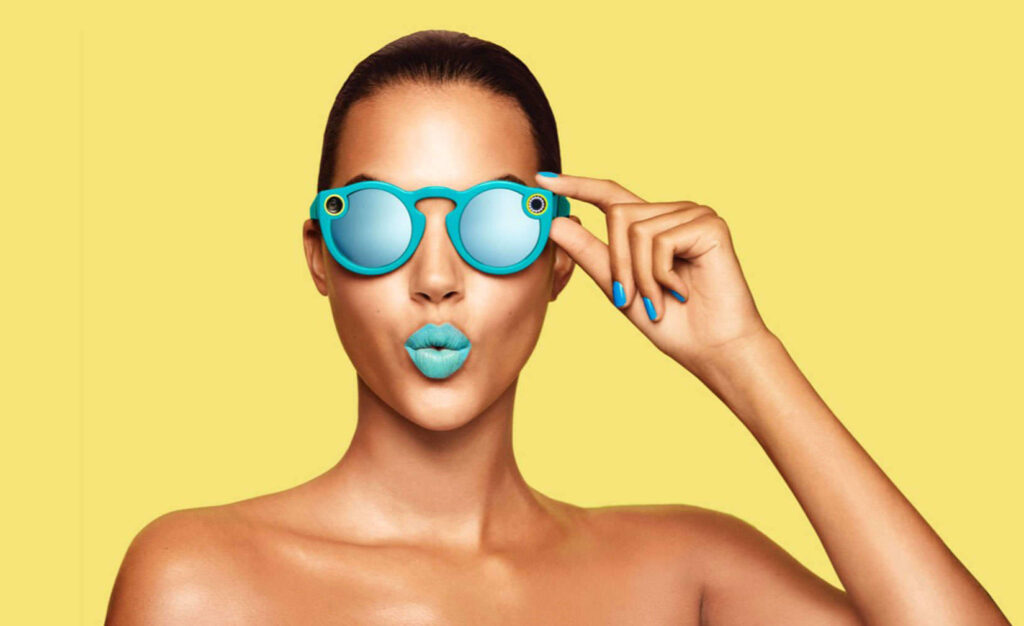 As for the Specs’ specs: they weigh just 134g, making them considerably lighter than Magic Leap’s chunkier 316g Magic Leap 1. Snap’s new Spectacles come with 30 minutes of use per charge.

The smart glasses are powered by Qualcomm’s Snapdragon XR1 Platform and the new Snap Spatial Engine “that leverages six degrees of freedom and hand, marker and surface tracking,” according to a statement from Snap.

It also comes with dual 3D waveguide displays and a 26.3 degree field of view overlay Lenses – Snap’s names for the AR filters that can add things like virtual bunny ears to people’s heads – that “react quickly and appear accurately in your field of view with 15 millisecond motion to photon latency, and the display dynamically adjusts up to 2,000 Nits of brightness to explore AR indoors or outside.”

“They’re lightweight display glasses, made for creators to overlay their Lenses directly on to the world, exploring new ways to fuse fun and utility through immersive AR,” Snap said.

“Over the years, our journey building Spectacles alongside the creator community has been one of exploration, learning and fun. We’ve used every iteration as a building block, opening the door to a whole new dimension of AR.”

The new Spectacles are only being made available to creators for the purpose of developing new AR experiences using the smart glasses’ built-in Lens Studio. They won’t be on general sale.

Snapchat’s new Spectacles follows from a few quarters of solid growth for the company. In its Q1 earnings, it beat market expectations by making $770m in revenue and growing its global daily active users to 280 million. Snap’s net loss shrank by 6% to $287m, compared to $306m in 2020. The company provided an adjusted EBITDA forecast in which it expects to lose as much as $20m or break even this quarter.

Despite these results and Snapchat’s new Spectacles, Snap remains an underdog in the world of augmented reality. Apple, Google, Facebook, Seiko Epson, ThirdEye and Vuzix are just some of the companies innovating in this space.

It’s hardly surprising that Big Tech is betting on AR. GlobalData’s thematic research estimates that the AR market will be worth $76bn by 2030, up from $4bn in 2018.

Smart glasses will play a key role in the sector’s growth. This may be surprising to anyone remembering the failed launch of Google Glass in 2014. Not only did the gadgets fail to gain the traction that developers had envisioned, but early adopters were even branded with the unflattering soubriquet “glassholes”.

“However, the recent launch of Amazon Echo Frames and Google’s purchase of smart glasses maker North in June 2020 suggests Big Tech still sees potential in the technology as a consumer product,” analysts wrote in a recent GlobalData thematic research report.

As technology keeps blurring the lines between online and offline, a growing number of companies are developing smart glasses. Facebook has partnered with Ray-Ban to produce its own version and Apple is rumoured to be working on its own set of specs. Google itself announced its Google Glass Enterprise Edition 2 in 2020, complete with AR capabilities.