Flagship smartphones are getting increasingly expensive in the United States and across the world. But in an arena of escalating phone prices, US carrier Sprint continues to slash its phone prices.

Smartphones are getting increasingly expensive, thanks to Apple and Samsung, especially in the premium flagship category.

New phones such as the iPhone XS and Samsung’s Galaxy Note9 cost upwards of USD$1000 across all regions. But in an arena of escalating phone prices, Sprint is the only contract US carrier that continues to slash prices on its devices.

In Q3 2018, Sprint did not offer any smartphones over $750. Only 10% of Sprint’s contract phone portfolio was priced at $700 or more compared to almost 50% at rival carriers such as Verizon Wireless, AT&T and T-Mobile.

This does not mean that Sprint did not have premium $1000+ flagship phones in its portfolio, but that the carrier heavily discounted even these devices. 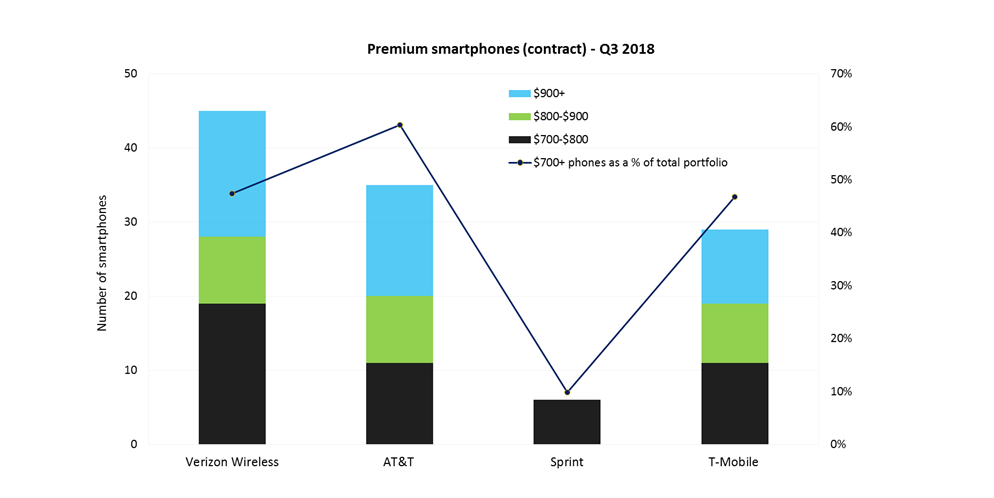 Even iPhone prices were slashed at Sprint. Sprint’s iPhones were some of the lowest priced in the US (Apple does not sponsor carrier-specific device rebates; this is Sprint’s realisation that it needs to buy its way in to the market.)

In Q3, Sprint also dropped prices on Samsung’s Galaxy S8, the Galaxy S9+, the Galaxy Note9, and offered the new $750+ LG G7 ThinQ at an astoundingly low price of USD$126.

Sprint’s devices have been available at a constant markdown for almost two years now. The struggling carrier was in turnaround mode starting 2017, had high debt and leverage levels and negative free cash flow.

It was imperative for Sprint to spruce up its portfolio with disruptive pricing for devices and services to boost its quarterly numbers for a possible M&A with T-Mobile, which was announced in May 2018

It’s not as simple for Sprint

Sprint’s position remains precarious despite the drastic price cuts on devices and services. The merger with T-Mobile is still awaiting regulatory approval and the carrier remains increasingly disadvantaged when it comes to wireless network coverage.

These drastic price cuts seem to be working for Sprint, but in bursts, as seen by some of their quarterly numbers – in Q3 2017, Sprint reported its highest retail net adds in three years with postpaid net additions of 256,000, including 184,000 phone net additions. And in Q1 2018, Sprint posted a net annual income (a profit of $69 million) for the first time in 11 years.

Sprint’s continued discounts for premium devices are certainly eye-catching, but are not economically sustainable for long.

The carrier has acknowledged that it will rationalize device and service pricing at some point. Sprint, with its aggressive price discounts on devices, is simply keeping its foot on the gas until it is safely a part of T-Mobile. Sprint’s rivals should start playing up the uncertainty around the merger, and AT&T, Verizon Wireless and US Cellular should emphasise the strength and stability of their brands and network in their marketing.