Trump has proposed a 25% tariff on steel imports and 10% on aluminium, triggering sharp sell-offs on Wall Street and losses overnight on Asian markets.

Japan’s benchmark Nikkei 225 lost more than 2% by mid-morning while shares in Japan’s car-making giant Toyota were down 2% and Nippon Steel stocks down more than 4%.

Trump announced the plans, which have yet to be finalised, during a meeting with steel and aluminium executives. He said the policy is “being written now”.

Trump has long pushed for trade deals more favourable to the US as part of his so-called America First policy, arguing that existing agreements are unfair on the country.

But the forecaster Econofact warned the tariffs might do more harm than good – the US has 2m jobs in industries that are intensive consumers of steel.

Across many states, the number of jobs adversely affected in these steel-using industries could far exceed any steel jobs saved.

Meanwhile, Mexico and Canada have said they will fight back against the trade barriers.

Mexico asked Washington to exclude it from any steel tariffs but said it will have “no option” but to retaliate with tariffs of its own if the US does not, the Financial Times reported last night.

The European Union also warned of retaliatory measures if Trump goes ahead with the plan.

It said overnight it will seek World Trade Organisation-compatible measures to safeguard its domestic sectors, with steel industry leaders estimating the tariffs would cut in half European steel exports to the US, put at around five million tonnes last year.

Canada and Brazil are likely to bear the brunt of the steel tariffs, according to a 2017 report from the US Department of Commerce.

According to the department’s International Trade Administration and IHS Global Trade, Canadian and Brazilian steel comprised 16% and 13% of US steel imports as of September 2017.

China, frequently criticised politically for dumping cheap steel on trade partners, is not one of the top ten importers of steel to the US.

The move could however set the US on a collision course with China, whose top trade official, Lui He, is in Washington for talks.

China has indicated it could retaliate by targeting US agricultural exports such as soybeans. 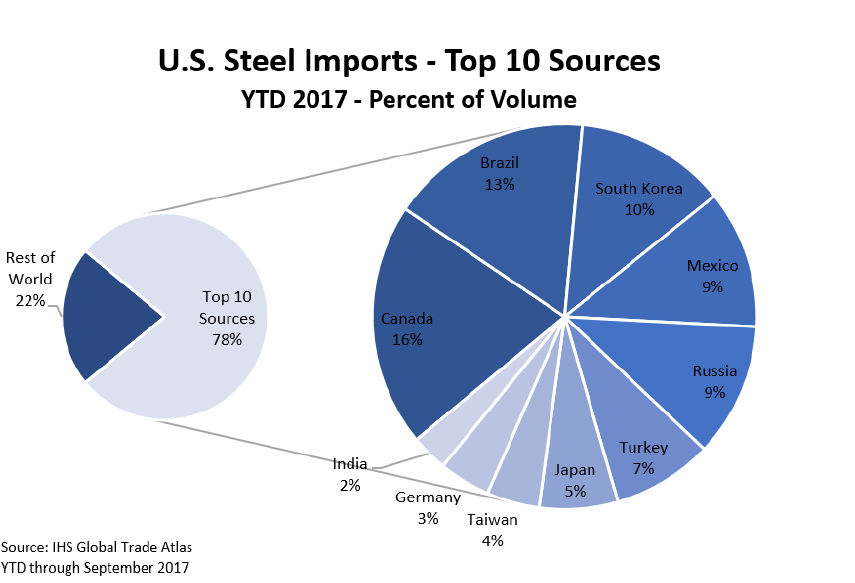 Source: The US Department of Commerce