Seven years on from the death of Steve Jobs, fans of the late Apple founder are still eager to get their hands on anything and everything that he left behind.

Items sold following his death include a high school yearbook that went for $12,300, a leather jacket that went for $22,400 and the first Apple business contract, which sold for $1.6 million.

RR Auction is offering up the latest batch of Steve Jobs memorabilia, but you need to act fast if you want to get in on the bidding.

The online auction got underway on Thursday, 8 March, and over $70,000 has already been offered for three pieces of Steve Jobs signed memorabilia. The hammer will come down on Thursday, 15 March, with the sales tipped to make $90,000.

Among the pickings is a job application filled out by an 18-year-old Jobs soon after he dropped out of college in 1972.

In the 18 months that followed, Jobs stayed nearby Reed College, taking free courses to learn many of the skills that would aid him in the development of the first Macintosh computer. Seemingly in need of funds, Job filled out this job application with little care or attention.

Rife with spelling and grammatical errors, Jobs lists his address as “reed college” and his major as “english lit”. However, he put a little more effort into explaining his abilities and interests, which reads “electronics tech or design engineering. Digital – from Bay near Hewitt-Packard”.

“It’s a remarkable document that reveals Jobs’ early aspiration to work in the fledging tech industry that he would one day revolutionise.”

The auction house set a guide price of $50,000. However, bidding has already surpassed that. At the time of writing, the current price sits at $55,000. 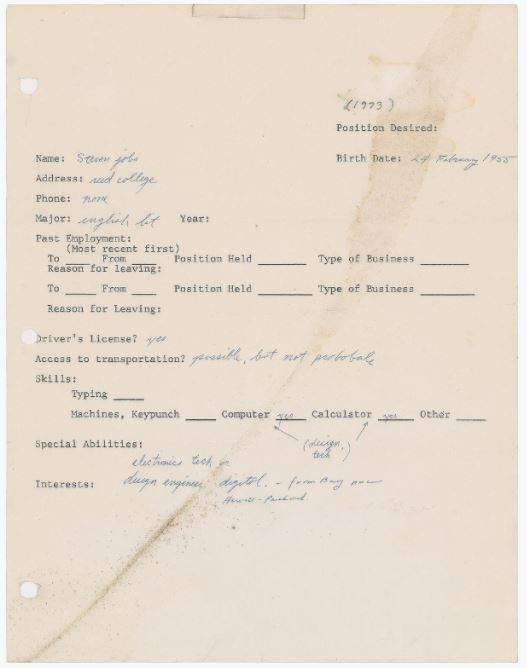 The job application has stolen the headlines in the build up to the auction. However, a signed Mac OS X manual has already received bids up to $10,800.

Obtained by a visitor to Apple’s Cupertino, California office, RR Auction notes the rarity of such items, given that Steve Jobs was a “notoriously difficult signer” according to Livingston.

According to the consignor notes, the seller recalls: “”It was afternoon, the end of my training day and I just got into my car when I saw Mr. Steve Jobs walking into his car. I rolled down my window and called up his name. He asked me whether he knew me. I told him I certainly knew who he was and immediately asked him if he would be kind enough to sign my Mac OS X Administration technical manual. He refused and said ‘I feel weird doing that.’ I refused to back down. After a bit of cajoling on my part, he finally told me to hand over the manual and pen. He said ‘give me those’ and he autographed my manual.”

Procured in 2001, Steve Jobs was already a noteworthy name, but following the success of the iPod, iPhone and iPad, its value has climbed. RR Auction estimates that bidding could top $25,000 by Thursday. 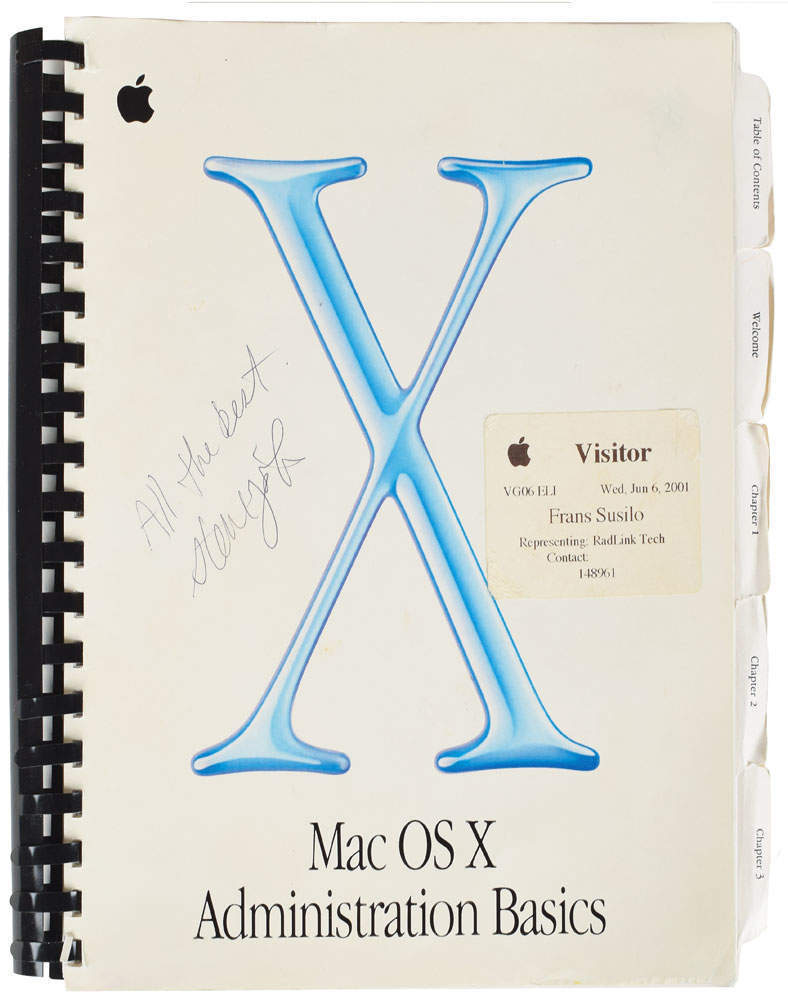 The final item up for sale is a 2008 newspaper clipping  from the Palo Alto Daily Post following the announcement of the iPhone 3G, which introduced 3G data usage and the App Store.

The clipping, signed by Jobs and by Tony Fadell, then senior vice president of Apple’s iPod division, is expected to fetch $15,000. Bidding currently sits at $10,500. 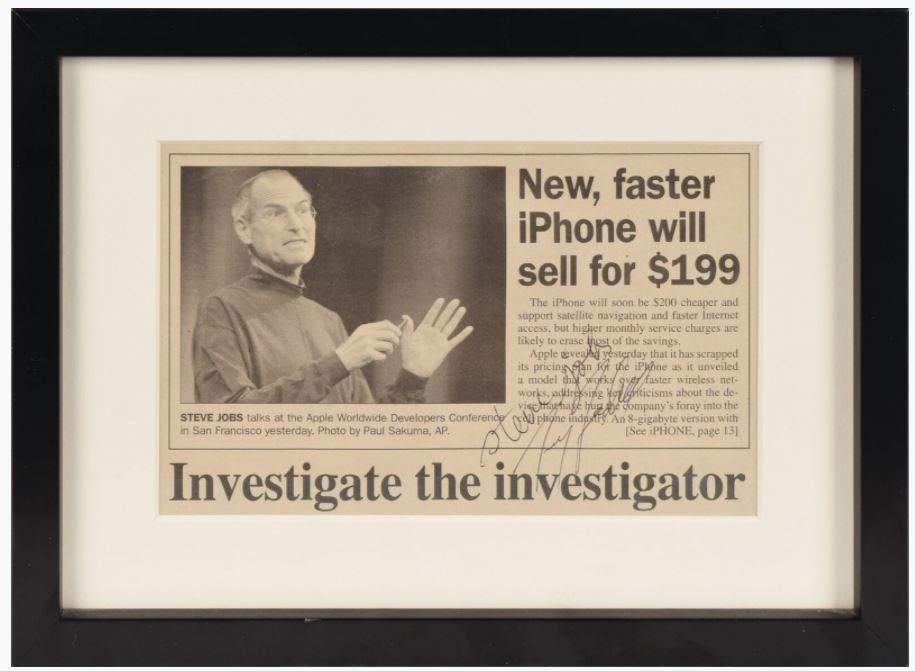 The Steve Job memorabilia up for auction are just some of the rare items that RR Auction is selling this week.

Its Pop Culture auction will see a total of 560 pieces of celebrity, television and pop culture history go under the hammer.

Included in the lot are a 14K gold necklace once owned by Elvis Presley and Jimi Hendrix’s fingerprints following an arrest in 1969. View the catalogue here.