Americas is the largest and most mature subscription video on demand (SVoD) market worldwide, however, it is also very heterogeneous with the countries showing very different adoption and competition: North America is expected to account for an estimated 71.4% of the total subscriptions in the region as of year-end 2019, while for Latin America is expected to account for the remaining 28.6%.

Content has become a key asset to compete in the over-the-top (OTT) video market. Most OTT video platforms in the region are focusing on all-inclusive SVoD content offerings, including original productions in the local language. This is the case for Netflix, which has been investing heavily to produce content tailored for Spanish and Portuguese-speaking audiences in Latin America. In addition, an increasing number of standalone SVoD platforms have started to add live content as part of their OTT video offerings, competing closely to traditional pay-TV players. This strategy has been followed by companies such as Amazon and YouTube in the US, which as well as their on-demand content libraries also offer access to popular TV channels. By adding live and linear content to their content portfolios, OTT operators can enhance their consent propositions and lure traditional pay-TV service subscribers into cord-cutting.

Although cord-cutting has not yet affected the Latin American pay-TV market, and we do not think it will do so over the forecast period, the popularisation of on-demand content and the emergence of new commercial platforms in the SVoD market will slow down pay-TV subscriber growth. 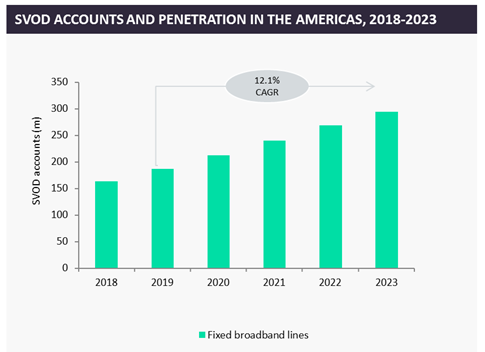