Zurich-based insurance company Swiss Re has posted a net profit of $331m, down from $3.5 billion last year following a spate of natural disasters in 2017.

The global insurance bill for 2017’s natural catastrophes, including the hurricane trio of Harvey, Irma, and Maria and a severe earthquake in Mexico, is expected to come to $135 billion – higher than ever before.

Overall losses – which includes uninsured losses – amounted to $330 billion from 710 natural catastrophes, the second-highest figure ever recorded, German insurer Munich Re revealed in its annual natural disaster report at the beginning of January.

Swiss Re estimates that claims from large natural catastrophes would be $4.7 billion in 2017.

The company lost $3.7 billion in its property and casualty unit from from large-scale natural catastrophes.

However, the company unveiled plans to raise its dividend and return an additional $1 billion to shareholders.

Shares in the company climbed following the results announcements in Zurich, while the stock is up 6.5% over the last 12 months. 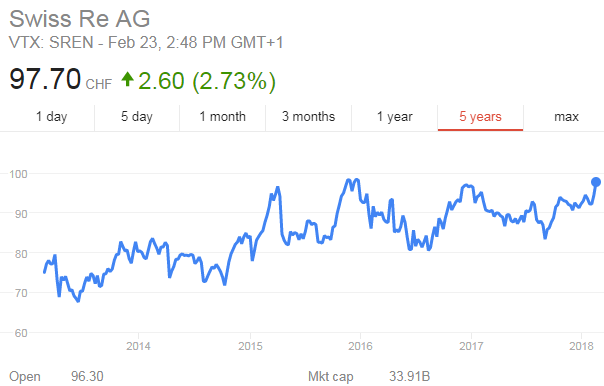 CEO of Swiss Re Christian Mumenthaler described 2017 as a challenging year for the industry.

The severe natural disasters of 2017 are not only loss events, they are above all human tragedies. In times like these we demonstrate the critical role re/insurance plays in enabling people and economies to recover.

I am proud that Swiss Re, also through our clients, will be supporting people and businesses affected with estimated payouts of $4.7 billion. 2017 proved how our strategy to maintain a superior capital position and pursue disciplined underwriting continues to be the right approach.

The results come after Swiss Re confirmed this month it is in talks with Japan’s Softbank Group regarding a potential partnership and minority investment.

SoftBank wants to buy as much as a third of the reinsurer, Bloomberg has reported.

Swiss Re’s board of directors is carefully assessing the strategic and financial implications of such a partnership, having in mind the best interests of the company and its shareholders.

Swiss Re’s capital position remains very strong; the issuance of new capital is not under consideration. There is no certainty that any transaction will be agreed, nor as to the terms, timing, or form of any transaction.

As a result of climate change and increased natural disasters governments around the world are working to arrest the change.

Following the US withdrawal from the Paris climate accords, other countries have been spurred on to do more to try to limit emissions.

Despite this the Trump administration released a report in November last year that warned “extreme climate events” like heavy rainfall, heatwaves, wildfires, and rising sea-levels get more severe and potentially result in abrupt, irreversible climate changes.