Good morning and welcome to Tech Report Weekly 13 July. This week in tech it’s high noon for Huawei’s role in the UK’s 5G network (again), Netflix’s earnings will show the true impact of the pandemic on streaming and the UK considers how best to tackle its growing e-waste problem.

We’ll also be shining the spotlight on the mounting antitrust probes facing Big Tech, from Google’s Fitbit acquisition to Apple’s App Store practices. The Verdict team has also highlighted some of the terrific technology journalism we’ve been reading from around the web, as well as key quotes, news and features from our own reporting. If you’d like all of this sent straight to your inbox every Monday at 7am, subscribe here.

Have a spectacular week and we hope you enjoy Tech Report Weekly.

Why it matters: The UK government gave telecommunications carriers the green light to continue using Huawei equipment in the country’s mobile and broadband infrastructure in January, with Huawei banned from the sensitive parts of the network and limited to a 35% market cap. But the political winds have changed and fresh US sanctions have reportedly shifted the view of British intelligence agencies that Huawei can be risk-managed.

That briefing is due to be presented to Prime Minister Boris Johnson during a National Security Council meeting on Tuesday, with reports suggesting ministers will be advised to ban new purchases of Huawei technology by the end of the year and an accelerated timeline to remove Huawei from the network completely. Huawei, which strongly denies that it poses a security threat, has been present in the UK’s communications network since the early 2000s. Telecoms firms say stripping Huawei out of the network will prove costly and slow down the UK’s rollout of 5G.

How to follow it: We’ll be following this story as it develops throughout the week – visit verdict.co.uk for the latest updates.

Why it matters: Between January and March Netflix cemented its position as the world’s largest streaming company by adding a record number of paying subscribers – 15.8 million – to bring its total count to 182.86 million. The end of that period was boosted by early lockdown restrictions, which created additional demand for stay-at-home entertainment.

Q2 will show the true extent of the pandemic’s impact on Netflix and act as a bellwether for the streaming industry. Netflix is anticipating an additional 7.5 million subscribers during the period. However, CEO Max Hastings has said the estimate is “mostly guesswork” due to coronavirus uncertainty. But as earnings season gets underway, one thing analysts can agree on is that Netflix looks set to be one of the rare pandemic success stories.

How to follow it: Netflix publishes its Q2 earnings on Thursday.

Why it matters: The world produces 50 million tonnes of e-waste per year, and that figure is on the rise as technology becomes cheaper to replace and consumers want more of it. The average UK person produces more e-waste than those in the rest of Europe. From phone chargers to old laptops, e-waste can be toxic for the environment and costly to get rid of safely.

That’s why the Environmental Audit Committee launched an inquiry in March to understand the challenges faced around e-waste, what the government can do to move towards a circular economy and what it can o to prevent the illegal export of e-waste. Representatives from Amazon, Samsung Electronics, Dixons Carphone and others are expected to provide expert testimony to the committee.

How to watch it: The evidence session can be viewed online at Parliament TV from 2:30pm on Thursday.

Fighting Food Waste with Too Good To Go 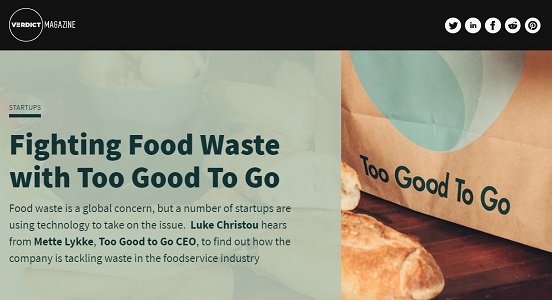 Food waste is a global concern, but a number of startups are using technology to take on the issue. Luke Christou hears from Mette Lykke, Too Good to Go CEO, to find out how the company is tackling waste in the foodservice industry.

For the past few years, Big Tech has faced a growing wave of antitrust investigations from European and US regulators. This month the European Commission will reportedly make a decision on whether it will investigate Google’s $2.1bn acquisition of Fitbit, announced in November.

According to Reuters, other players in the wearables market have been asked by the European Commission to give their views. However, sources told the news organisation that Google may be able to avoid an investigation if it pledges to keep Fitbit’s health separate from its targeted ads business.

Google has so far received three large antitrust fines from the European Commission. In March it was fined €1.49bn for “imposing a number of restrictive clauses in contracts with third-party websites which prevented Google’s rivals from placing their search adverts on these websites”. Amazon and Facebook have also fallen onto the radar of regulators in recent years.

Last month, The European Commission opened up antitrust investigations into Apple’s rules for app developers on the distribution of apps via the App Store, as well as whether “Apple’s conduct in connection with Apple Pay violates EU competition rules”. So far fines levied against tech giants have had little lasting impact, suggesting Big Tech may be too big to be truly at risk to regulators as things currently stand.

Bump: Could a wearable device be the answer to workplace social distancing?

“This is as close to a clean slate as it gets, because we can be strategic about where we deploy investment to create infrastructure that will enable us to pursue both economic prosperity and a more sustainable, more equitable future for everyone.”

– Simon Segars, CEO of semiconductor giant Arm on the opportunity to create a better post-Covid world with the help of technology.

TikTok: Chinese app may be banned in US, says Pompeo

With the Trump administration reportedly looking into banning Chinese social media apps such as TikTok, the BBC’s James Clayton explores how this could play out

After the pandemic, doctors want their new robot helpers to stay

The Verge’s James Vincent looks at how the coronavirus pandemic has accelerated the adoption of medical robots in hospitals.

For The Atlantic, activist Malkia Devich-Cyril explains how he is tired of being spied on by the police with facial recognition.