Good morning and welcome to the first Verdict Tech Report Weekly for 15 June, our new briefing to set you up for the week ahead. I’m Rob Scammell, Verdict deputy editor. Each Monday I’ll be sharing three upcoming stories that matter in the world of technology, from the policy decisions shaping the future of the industry to the make-or-break earnings results.

We’ll also be shining the spotlight on a topic that is shaping conversations in the industry right now. This week Verdict editor Lucy Ingham looks at tech giants halting the sale of facial recognition technology to law enforcement in the wake of the George Floyd protests. In this new format we’ll also share some of the excellent technology journalism we’ve been reading from elsewhere, as well as key quotes, news and features from our own reporting. If you’d like all of this sent straight to your inbox every Monday at 7am, subscribe here.

Have a great week and we hope you enjoy Tech Report Weekly.

Why it matters: When prime minister Boris Johnson gave the green light for telecoms firms to use Huawei technology in “non-core” parts of the UK’s 5G networks, it appeared to put a close to two years of indecision and speculation. Then, in early March, the government launched an inquiry into the security issues surrounding the next generation of cellular technology, with a particular focus on Chinese tech giant Huawei.

During the last evidence session, Emily Taylor, CEO of cyber intelligence consultancy Oxford Information Labs, told the committee that it was “feasible and plausible” to keep Huawei out of the most sensitive parts of the UK’s 5G network. Tuesday’s session will see US congressman Mike Turner, an outspoken critic of Huawei, give evidence to MPs.

How to watch it: You can watch a live stream of the evidence session, starting at 2:30pm BST, on Parliament TV here.

Why it matters: The quarter ending 31 May is typically the firm’s strongest of the year and a bellwether for the fortunes of the software giant. However, Oracle’s stock market performance has been sub-par compared to the S&P 500 of late, and investors will be looking for some good news to settle pandemic nerves. Analysts are forecasting revenue for the period to come in at $10.87bn, a 2% decline year-over-year.

They will also be eager to see how many enterprise resource planning customers Oracle has poached from long-time rival SAP.

How to watch it: You can watch an earnings webcast at 2pm PT here.

What’s happening: On Friday Jack Dorsey-founded tech firms Twitter and Square will both hold a company holiday on Juneteenth, a day commemorating the end of slavery in the US in 1863.

Why it matters: The Black Lives Matter protests, driven by the death of African-American George Floyd after a police officer knelt on his neck for nearly nine minutes, has led to much introspection in the tech world. The lack of diversity in the industry, with senior roles overwhelmingly going to white or Asian men, has been well documented.

But the killing of George Floyd appears to have led to some meaningful changes already. Tech giants have stopped selling facial recognition technology – which often discriminates against black people – to law enforcement (see Spotlight below). Reddit co-founder Alexis Ohanian stepped down from its board and ensured he was replaced by a black candidate.

Change is happening, and Twitter and Square’s Juneteenth celebrations are a small part of a slowly turning tide. Continuing that momentum and putting equality above profits will be among tech’s biggest challenges. 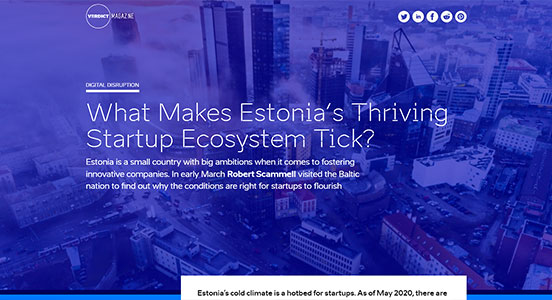 Estonia is a small country with big ambitions when it comes to fostering innovative companies. Robert Scammell visited the Baltic nation to find out why the conditions are right for startups to flourish.

Facial recognition technology has dominated technology news this week, and the reason isn’t down to new launches or changes in regulation, but the George Floyd protests.

Although it has been around for some time, facial recognition technology has advanced significantly in the last few years, enjoying ever-greater adoption rates in the process. This includes among law enforcement agencies, who have increasingly used the technology to identify potential suspects. However, there is a problem, in that facial recognition is not only not perfect, but it is often severely biased due to the data it is trained on, with much poorer results and a greater incidence of false positives with people of colour.

As a result, facial recognition technology in use by police during the George Floyd protests is essentially racist, which can only make tensions between the public and police over the treatment of people of colour worse.This has prompted a significant backlash and forced developers of technologies to react. Amazon, one of the leaders in the space, has stopped selling its Rekognition technology to police – although possibly not federal law enforcement – for a year, while Microsoft has made a similar move.

IBM has cancelled its facial recognition project altogether, although this may have been more to do with the fact it was lagging behind. However, many have seen these moves as hollow temporary solutions to a long-term problem, arguing that if facial recognition technology is to improve and be appreciated for its benefits, which range from retail age verification to market research and beyond, the only way is regulation.

“The injection of deepfakes into an already dysfunctional online ecosystem will only plunge us further into this digital dystopia.”

– Hany Farid, a professor at the University of California, Berkeley, on the risk posed by deepfake videos.

Google got rich from your data. DuckDuckGo is fighting back

Wired’s Matt Burgess talks us through the rise and resilience of DuckDuckGo, the pro-privacy challenger to Google’s search engine dominance.

How Bill Gates became the voodoo doll of Covid conspiracies

The Covid-19 pandemic has seen a surge in conspiracy theories and misinformation. The BBC’s Jane Wakefield explores how Microsoft co-founder Bill Gates found himself at the centre of one particularly bonkers conspiracy.

The PlayStation 5’s design is being relentlessly mocked on Twitter

For some light-relief, The Verge’s Jay Peters has brought together the best memes mocking the newly revealed Playstation 5, which many have compared to a wireless router.