Good morning and welcome to Tech Report Weekly 17 August. This week in tech Alibaba, JD.com, Nvidia and Synopsys report their latest quarterly earnings. Following the A-level results scandal, GCSE students are bracing for more algorithm controversy. Meanwhile a completely different type of algorithm is put to the test against an F-16 fighter pilot.

We’ll also be taking a deeper look at the recession and how digital technologies could help soften the blow to the UK in this week’s Spotlight. The Verdict team has also highlighted some of the top technology journalism we’ve been reading from around the web, as well as key quotes, news and features from our own reporting. If you’d like all of this sent straight to your inbox every Monday at 7am, subscribe here.

Have a wonderful week and we hope you enjoy Tech Report Weekly.

Why it matters: Nvidia is expected to reap the benefits of pandemic-fuelled demand for cloud computing and data centres when it reports earnings for the period ended June. Analysts expect the US multinational, which also creates graphics processing units for the artificial intelligence and gaming sectors, to post revenues of $3.65bn – up 41.7% from a year ago. It comes as Nvidia is reportedly closing in on a takeover of British chip designer Arm, in a deal that could value the SoftBank-owned company at up to $40bn.

Alibaba and JD.com’s results will provide some insight on how Chinese consumers are spending during the pandemic as the world’s second-largest economy recovers. Their results come at a time of unease about US restrictions among Chinese technology companies. On Saturday, US President Donald Trump suggested Alibaba could yet find itself the target of an executive order such as the ones filed against TikTok and WeChat. Elsewhere, Alibaba has also expanded its cloud computing segment and will be looking for increased sales in this area.

Meanwhile Synopsys, which focuses on silicon design verification, software security and silicon intellectual property, is expected to post revenues of $893.51m, up 4.8% year on year.

How to follow it: JD.com reports Q2 earnings on Monday. Nvidia and Synopsys report Q2 and Q3 results on Wednesday, while Alibaba reports Q1 results on Thursday. Visit verdict.co.uk for analysis of the results.

What’s happening: A grading algorithm is expected to generate more controversy this week when teenagers in the UK are awarded their GCSE results.

Why it matters: The government spent last week facing heavy criticism for the way exams board Ofqual awarded A-level results. In lieu of students being able sit exams because of the pandemic, a mathematical model was used that factored in how well their school or college performed in recent years. That meant talented students in poorly performing schools saw their predicted grades fall. Overall, the algorithm decreased nearly 40% of A-level students’ predicted grades.

According to analysis shared with the Observer newspaper, nearly 5 million GCSEs – 97% of the total – will this week be awarded using the same model. The A-level results scandal has already sparked legal action and raised questions about whether it fell afoul of GDPR. Under GDPR, people have a right to challenge an automated decision that has significant consequences. However, the UK’s data regulator, the Information Commissioner’s Office, said “Ofqual has stated that automated decision-making does not take place when the standardisation model is applied”.

How to follow it: GCSE results are awarded on Thursday. We’ll be keeping an eye on the latest legal challenges to the algorithmic marking system and developments.

Why it matters: The US military wants advanced AI algorithms that can autonomously outmanoeuvre enemies in an aerial dogfight. DARPA, the Department of Defense’s research agency, selected eight teams in 2019 to take part in a three-part competition to create an algorithm up to the task.

This week will see the remaining teams pit their AIs against one another in a simulated environment. Then, the victorious algorithm will face a human F-16 fighter pilot, flying in a virtual reality (VR) environment, to stretch its abilities to the limit. “Regardless of whether the human or machine wins the final dogfight, the AlphaDogfight Trials is all about increasing trust in AI,” said Col. Dan ‘Animal’ Javorsek, programme manager in DARPA’s Strategic Technology Office. “If the champion AI earns the respect of an F-16 pilot, we’ll have come one step closer to achieving effective human-machine teaming in air combat, which is the goal of the ACE program.”

How to follow it: Trials take place virtually on Tuesday and Wednesday. You can register to watch it live here.

Does coronavirus cause 5G? 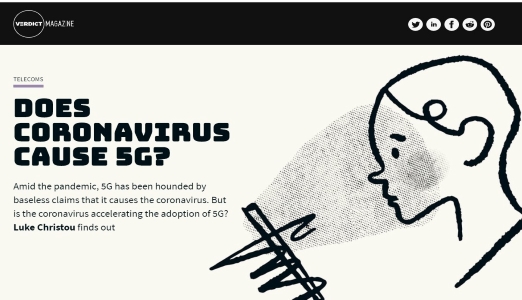 Amid the pandemic, 5G has been hounded by baseless claims that it causes the coronavirus. But is the coronavirus accelerating the adoption of 5G? Luke Christou finds out.

Spotlight on: The recession

The other shoe has finally dropped. This week the UK confirmed what had long been suspected: we are in a recession, and it is a big one. On Wednesday, the Office for National Statistics confirmed that the UK had experienced to quarters of GDP contraction – the technical definition of a recession – with the latest, Q2, being the worst on record, with a slump of 20.4%. It’s unsurprising given the massive shock to economic activity that the coronavirus pandemic has caused, but it is also worth noting that the UK has fared worse than any other G7 country. And while June has seen an uptick of 8.7%, there is a long way to before we can return to growth.

Which, timing-wise, is a problem. The UK is just months away from what is increasingly looking like a no-deal Brexit that is set to create myriad problems for the economy, both physical and digital. But the latter has long been seen as key to the UK’s post-Brexit future, and it is certainly going to prove vital to the country’s economic recovery now. The country’s technological might is strong, particularly in areas such as fintech, and a myriad of experts from across the political spectrum have cited it as essential to the country’s future. However, while the future, if it can be helped to emerge by government and enterprise alike, contains a host of shiny digital-first jobs for the population, the skills the UK holds do not match those it will need.

The digital skills deficit has been cited so many times it is beginning to sound like a trite buzzword, but it remains an essential problem to address. Infrastructure is also a concern, with a digital divide cutting through the country and stymying economic growth in many areas. There is no easy solution to the problem at hand, but if the UK is going to come out of the recession quickly and begin to thrive, digital is an area that will require massive focus. This is not the challenge of just the government, but everyone who has a stake in the country’s future. And for businesses, it creates a plethora of opportunities for growth

“TikTok – the most downloaded app in the world – is no longer going to be available on Apple or Google devices. To me, this sounds like an opportunity for Huawei. Which is probably not what the White House was aiming for.”

Why Wikipedia decided to stop calling Fox a ‘reliable’ source

Noam Cohen explores how Wikipedia’s ditching of Fox provides a new model for content moderation in this piece for Wired.

Democratic, Republican conventions will be like none we’ve seen before

CNET’ s Marguerite Reardon and Richard Nieva discuss how Covid-19 will impact the traditional pageantry of US party conventions.

For the Guardian, James Ball looks at how Trump’s ego versus a video-sharing app could have ripple effects that shape the internet