Good morning and welcome to Tech Report Weekly 28 September. This week in tech begins with two important court decisions on Monday. First, Uber will learn whether its appeal to renew its London licence has been a success. Later and across the Atlantic, a judge will decide whether to temporarily reinstate Fortnite on Apple’s App Store while litigation is underway. Rounding off the week is a public listing from secretive data company Palantir.

In this week’s Spotlight we take a deeper look at Amazon’s latest surveillance gadget: the Always Home Cam. The Verdict team has also highlighted some of the top technology journalism we’ve been reading from around the web, as well as key quotes, news and features from our own reporting. If you’d like all of this sent straight to your inbox every Monday at 7am, subscribe here.

Have an excellent week and we hope you enjoy Tech Report Weekly.

Judgement day for Uber in the capital

What’s happening: A judge will announce the result of Uber’s appeal to regain its licence to operate in London.

Why it matters: Uber’s largest market in Europe hangs in the balance after years of legal wrangling. In 2017, Transport for London denied the ride-hailing giant a licence to operate over safety concerns for passengers. The company was given a 15-month licence in 2018 following a court battle, and then a two-month licence in September 2019 while it made a number of improvements to its service. But in November last year, TfL once again turned down the Silicon Valley firm, citing a “pattern of failures”. With more than 3.5 million Uber users in London, it’s no surprise that the company appealed that decision.

Earlier this month, Uber argued its case during a three-day hearing at Westminster Magistrates’ Court. The court heard how “mistakes were made” by Uber over a software glitch that allowed more than 14,000 trips to be carried out by 24 known drivers who faked their identity on the app. That meant those journeys were uninsured and, in some cases, trips were with unlicensed drivers. However, Tim Ward QC representing Uber said the problem was “not endemic or widespread”. Should Uber lose, it’s unlikely to be the end of the road as the ride-hailing company can appeal once again.

How to follow it: Senior District Judge Tan Ikram will announce the decision from 10am onwards on Monday. We’ll be following this story at verdict.co.uk.

What’s happening: A US judge decides whether to reinstate Fortnite on Apple’s App Store while litigation is underway, and whether Apple should be prevented from retaliating against Epic Games’ developer accounts.

Why it matters: Back in August, Apple booted battle royale game Fortnite from its App Store after its maker, Epic Games, offered players the option to buy in-game currency directly and avoid paying Apple a 30% cut. The ban means that new players can’t download the game or receive updates on iPhones. Epic Games has argued that it will suffer “irreparable harm” if not reinstated to the App Store. Since it was kicked from the store, its daily active users on iOS have declined by over 60%, the company said. For Epic Games, the big fear is that these users will never return to Fortnite, which will translate into lost revenues.

For Apple, the income it received from Fortnite is minuscule. Epic Games does not provide a full breakdown of Fortnite revenues, but according to research firm Sensor Tower, the game generated $500m on Apple devices in 2018, netting Apple around $150m in commission. While that’s not to be sniffed at, it represents a mere 0.06% of Apple’s overall $265bn revenue from that same year. For a $2tr company, the bigger threat is the damage any long-term legal battles might do to its carefully cultivated image, as well as rallying other companies that are unhappy about Apple’s App Store policies against the tech giant.

How to follow it: The hearing takes place via Zoom at 9:30am PDT. Visit verdict.co.uk for analysis.

Why it matters: Notoriously secretive software company Palantir will this week have a very public pay day. The company, which creates software for analysing, managing and storing data, has courted controversy through a long list of government contracts, including one with the US Immigration and Customs Enforcement. The company has insisted that it does not facilitate deportations. Founded in 2003 by a group of PayPal alumni and Stanford computer scientists, Palantir has around $1.5bn in federal contracts alone.

The company could start trading at $10 per share, according to the company’s bankers, which would give the company a $22bn valuation and make it among the most valuable public listings this year. Instead of an initial public offering, Palantir is believed to be opting for a direct listing, a route that is cheaper than an IPO but in recent years hasn’t resulted in huge immediate rises in value for software companies. However, Palantir will be hoping pent-up interest in the company will drive demand for shares.

How to follow it: Palantir is expected to go public by Wednesday. Visit verdict.co.uk for analysis.

The next Huawei: Future targets in the US-China tech war 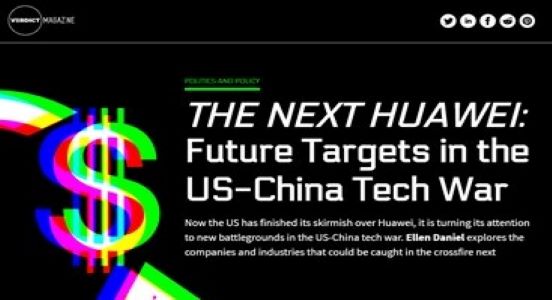 Now the US has finished its skirmish over Huawei, it is turning its attention to new battlegrounds in the US-China tech war. Ellen Daniel explores the companies and industries that could be caught in the crossfire next.

Considering the growing acceptance of smart home security and advancements in drone technology, the announcement of Amazon’s Always Home Cam may come as no surprise to those familiar with the industry. Created by Amazon Ring, the device in question is a camera drone that can fly along pre-programmed routes around a user’s home in order to monitor security or in the event of an intrusion.

Although many consumers are increasingly open to smart home security, with Amazon selling an estimated 400,000 ring devices last December alone, the latest device may prove a step too far for some, with Box CEO Aaron Levie tweeting “If 2020 wasn’t already dystopian enough for you, Amazon just announced an indoor flying drone camera.”

With the assurance that the device’s camera will be covered while not in use, as well as being designed to “hum at a certain volume” when recording, Amazon may have addressed some privacy concerns. However, considering the public reaction to recent reports of hackers gaining access to Amazon Ring devices, a result of reused credentials from previous breaches being used for credential-stuffing attacks, it remains to be seen whether Amazon can convince consumers that potential home security benefits outweigh the creepiness factor.

Jimmy Wales: Advertising-only model has been “incredibly destructive” for journalism

“We were relying a bit too heavily on early data from Wuhan rather than continually updating our understanding as it evolved. And I think collectively the UK wasn’t really looking at and questioning the assumptions in their models enough. I think ultimately we were just not applying really enough doubt.”

– Mathematician Hannah Fry on the UK’s use of data during the coronavirus pandemic.

Sarah Jeong talks to Newton about the details of his shock move to subscription journalism, and what makes email such a good media format in this excellent Medium post.

How much more junk can space safely take?

The Times’ Jacqui Goddard looks at the increasing threat of space junk after this week ISS astronauts were forced to shelter in a Soyuz capsule in case the station was struck by floating debris.

Following the discovery of phosphine on Venus, which may indicate the presence of microbes, Wired’s Jonathan O’Callaghan asks whether this could lead to future discoveries of life of the planet.