If Facebook chief executive Mark Zuckerberg thought a few full-page newspaper advertisements would be enough to gloss over the Cambridge Analytica scandal, then he has another thing coming.

The UK’s Secretary of State for Culture, Media and Sport, Matt Hancock, has demanded that tech giants “boil down” their terms and conditions in the wake of Facebook’s recent data breach.

Hancock will demand that tech companies that harvest user data must provide a simple, bullet-point guide on how user data is handled that takes up no more than a single page, according to the Times.

Speaking to the Times, Hancock said:

“People are bewildered by pages of unwieldy terms and conditions. I want these boiled right down so people can see in one glance what they’re signing up to. I want the big platforms to answer questions and demonstrate they are willing to change.”

“Technology is a massive force for good in our world. But good tech needs trust, and the big platforms are losing trust. Social media companies have a duty of care to citizens, and are currently failing in this duty of care.”

These requirements will likely be drafted into the Data Protection Bill, which is currently under discussion in parliament. If it passes, watchdogs could fine tech companies up to 4% of their turnover if they breach data laws.

Hancock has summoned representatives from Facebook, Google and Twitter to take part in a meeting on the Cambridge Analytica scandal next month.

The UK consulting firm was found to have  harvested the data of 50 million Facebook users, which was used to influence voters in up to 200 elections around the world.

Why has Hancock requested shorter tech terms and conditions?

Hancock argues that pages of jargon-filled terms and conditions leave users clueless as to what they’re actually agreeing to.

Here’s a choice example, taken from Twitter’s Terms of Service:

By submitting, posting or displaying Content on or through the Services, you grant us a worldwide, non-exclusive, royalty-free license (with the right to sublicense) to use, copy, reproduce, process, adapt, modify, publish, transmit, display and distribute such Content in any and all media or distribution methods (now known or later developed).

This license authorizes us to make your Content available to the rest of the world and to let others do the same. You agree that this license includes the right for Twitter to provide, promote, and improve the Services and to make Content submitted to or through the Services available to other companies, organizations or individuals for the syndication, broadcast, distribution, promotion or publication of such Content on other media and services, subject to our terms and conditions for such Content use.

Such additional uses by Twitter, or other companies, organisations or individuals, may be made with no compensation paid to you with respect to the Content that you submit, post, transmit or otherwise make available through the Services.

The tech giants that have their work cut out

Tech users have the difficult task of reading through all of the rules that they’re agreeing to when signing up for a new service.

On average, from the ten tech platforms and services that we looked at, new users must read through 16.9 pages. Companies spread these terms across multiple documents (we looked at terms of service, privacy policy and cookie policy). Likewise, they’re often difficult to navigate between and jargon is, of course, a given.

To make things fair, we copied each document into a word processor to calculate the number of pages. We made them all the same font and size, and removed rogue line breaks.

Which tech company is the worst offender?

Microsoft’s Services Agreement came out top with 28 pages in total.

However, it would be unfair to call it the worst. This agreement spans a range of services owned by the company. This includes video call app Skype, the MSN network, email system Outlook and the Xbox gaming network.

Were other companies to do the same and combine their terms and conditions for each of their products, they would likely top Microsoft’s document. Combining Facebook and Instagram’s current documents, for example, would total 34 pages.

However, Microsoft is also behind the worst single service offender. LinkedIn, a employment-focused social network, has a 10 page user agreement and a 13 page privacy policy.

And yet, despite asking so much of their users, the platform was unable to keep user data safe. It was revealed in 2016 that the data of 167 million LinkedIn users had been hacked and stolen.

Of the big three tech companies summoned to Hancock’s meeting, Facebook will have the most to answer for, and not just because of its central role in the scandal. Facebook prompts users to read eight pages of terms and conditions before signing up.

There is also a five page data policy, which outlines how apps are able to harvest your data. Likewise, there is also a four page policy on Facebook’s cookie use.

Tech companies ranked by length of their terms and conditions: 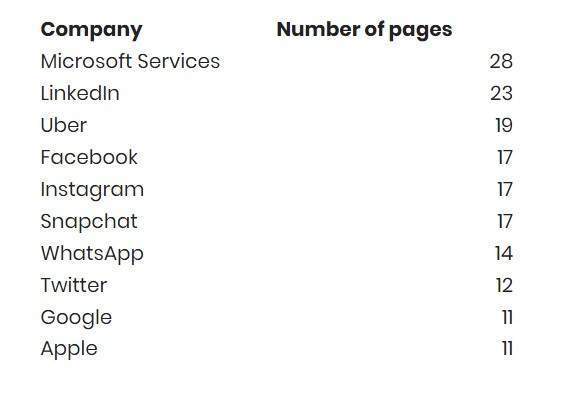