The United Arab Emirates prides itself as one of the last bastions of moderation and stability in a region racked with war, religious strife and economic malaise.

Yet beneath the oil-sheen veneer of Dubai’s mirror-walled skyscrapers and five star hotels, one of the world’s few remaining absolute monarchies has little tolerance for negative press.

Journalists, media outlets and activists who contradict the policies and world-view of rulers have become persona non grata in the UAE.

The UAE ranks 119 out of 180 countries on the World Press Freedom Index compiled by Reporters Sans Frontières (RSF).

The United Arab Emirates regularly participate in the online surveillance of journalists, who often fall victim to its 2012 cyber-crime law.

Citizen journalists and bloggers are usually targeted for criticising the regime and are accused of defamation, insulting the state, or posting false information with the aim of damaging the country’s reputation.

They risk long jail terms and are liable to be mistreated in prison.

The constitution guarantees free speech but the authorities can censor local or foreign publications if they criticise domestic policies, the economy, the ruling families, religion, or the UAE’s relations with its allies under the 1980 law on printed matter and publications.

UAE authorities have launched a sustained assault on freedom of expression since 2011. Like Saudi Arabia, the Emirates were afraid of Arab Spring contagion.

Last year the so-called Gulf crisis [also] had a strong impact on the media.

All types of media (public or private) are under the full control of the State Security Apparatus.

Hatred and defamation campaigns against certain groups or activities in the media are led, orchestrated and supported by the authorities.

Samy points to a 2016 report by Citizen Lab, a research hub at University of Toronto, Canada, which revealed that custom-made spyware was sent to journalists, activists and dissidents in the UAE.

The attacks have been conducted from 2012 until the present, against Emirati journalists, activists, and dissidents.

We discovered this campaign when an individual purporting to be from an apparently fictitious organisation called The Right to Fight contacted Rori Donaghy, a UK-based journalist and human rights activist.

Circumstantial evidence suggests a link between Stealth Falcon and the UAE government.

One journalist and two citizen journalists are currently in jail in the UAE, RSF reports.

Long jail terms are served up for criticising the regime, charges of defamation, insulting the state, or posting so-called false information that damages the country’s reputation, Samy said.

Twitter is becoming an increasingly dangerous place for netcitizens in UAE, even simple comments can land you in jail.

Only one voice is allowed in the media, the pro-government voice.

In July 2017, Dubai-based political and business magazine, Arabian Business, owned by independent publishers ITP Group, was banned from publishing for one month and had its website blocked by the UAE media watchdog for publishing what was described as fake news. 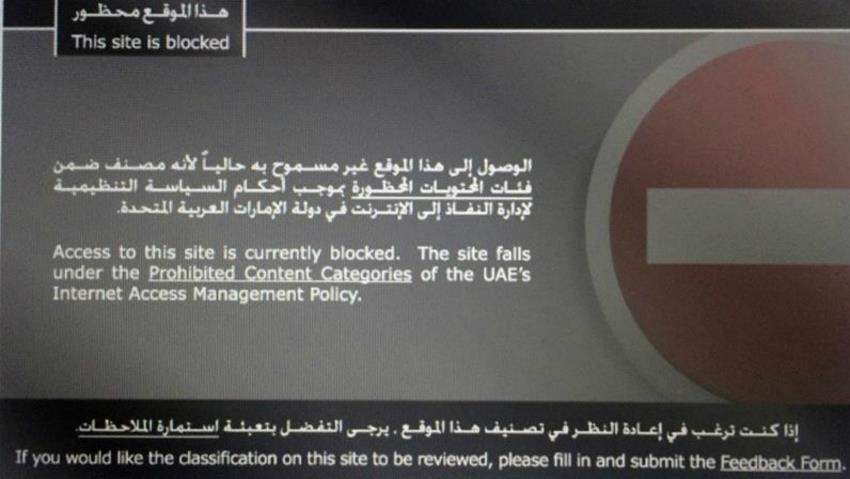 The report in question was headlined “51 Dubai projects under liquidation process” since the 2008 financial crisis. Arabian Business subsequently withdrew the report and issued an apology.

However, the report was picked up by a Qatari news site, just as a diplomatic stand-off between the UAE and other Gulf countries erupted, sparking cries of “collusion” by Emirati authorities.

The Twitter thread below shows a conversation between a Twitter user and the UAE telecom regulator, the TRA.

In July 2017, after a diplomatic row broke out between Qatar and the UAE, Emirati authorities issued a public announcement that social media users in the UAE expressing sympathy with Qatar online could face up to 15 years of jail time alongside a minimum fine of 500,000 dirhams ($136,000).

Kareem Chayeb, a journalist who used to work in Dubai, said that the UAE’s media landscape fails to shine a light on poor working conditions for migrant workers.

According to Chayeb construction companies regularly cut corners with workers’ wages and working conditions in an effort to maximise profits and boost the economy.

For them their caste society is designed in order to create profit maximisation and boosting the economy. Unfortunately that means migrant worker abuses of all sorts in construction.

Instead of the media being used to raise awareness and deepen understanding of the ills gripping society, it is used as a tool to promote Gulf countries’ economic diversification programmes.

Dubai — the largest city in the UAE — portrays itself up as a global investment hub, open for business and a great place for expats.

Seeing as what’s going on in the region, with some of the Gulf economies, I think they saw the media as an interesting tool that could push that.

You see those loopholes every now and then, but you realise that having a semi-free media helps to give the illusion of a free society, which makes it more appealing for investors and businesses.

The goal is looking outwards, not inwards. So it’s not about telling people who live in Dubai; ‘oh look we’re free.’ It’s about getting people from abroad to invest, and it’s about branding.

A lot of countries are using media — it’s very cheap to start an online news site – not just to promote a political agenda, but to promote investment and tourism, and basically brand the image of the country.

You are not going to see any reports that undermine the political legitimacy of leaders, he added.

It’s a threat to rulers, and to those who hold power, and it shows that if you have a free press, they’ll be called out in the media, and they’ll risk a lot.

One cannot claim to have a free society when there is not free media. It’s accountability, and I don’t understand why anyone would want to live in a society where their leaders aren’t held accountable for their actions.