As Sterling drops below $1.34 this morning ahead of the next round of Brexit talks with Brussels tomorrow, the FTSE 100 blue-chip index has hit a fresh record high, touching 7,843 points.

It’s the first time it has broken the 7,800 barrier, bolstered by the stronger US dollar and the US-China trade war being put on hold.

The truce between Washington and Beijing — though they haven’t reached a detailed agreement — is one of the big things fuelling the rise. Following tense negotiations, the two sides have reached an agreement that means tariffs will not be slapped on tens of billions of dollars of imports.

US Treasury secretary Steven Mnuchin — who flew to China at the beginning of May — announced the ceasefire last night. He told Fox News that Beijing had agreed to a framework to help reduce the US’s huge trade deficit with China.

The fall in the pound — which generally means international FTSE 100 companies that make their money in dollars benefit — takes it to its lowest in around five months. Investors are nervously awaiting economic data this week that could determine whether the Bank of England raises interest rates this year.

Inflation figures on Wednesday and gross domestic product on Friday will both be strong signals to the market of BoE governor Mark Carney’s intentions.

Markets have lost faith and conviction over BoE policy tightening, we now place a strong emphasis on UK data to guide market policy expectations. Buckle up, it’s going to be a bumpy ride for the pound this week.

The FTSE could be poised to move sharply higher if the fall in the pound against the dollar continues. Analysts at CMC Markets and Commerzbank have both predicted the pound will move closer towards the $1.3300 level in the short term.

We must note that the FTSE’s gains of late are probably more attributable to a weaker pound as the dollar rallies across the board. Cable fell as low as $1.341, its weakest level since December as the dollar index jumped towards the 94 level.

If support at 1.34 goes, 1.33 comes into view pretty quickly. It’s this slide in sterling which seems to be buoying the FTSE as much as the broader risk-on sentiment. 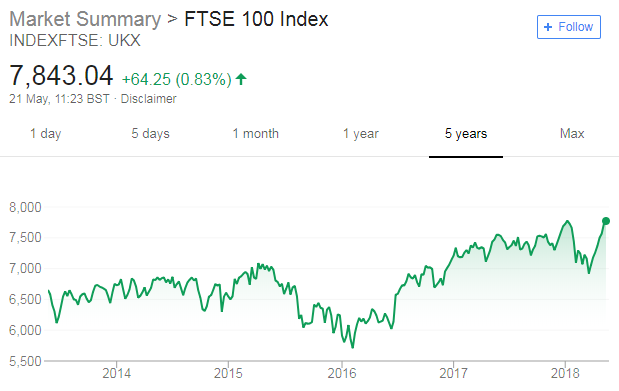 Will Hobbs, head of investment strategy at Barclays, said:

There are some offsetting factors for the FTSE that help to relegate it down our pecking order of favourite equity indices.

The most important of these is that in a world where the cyclical prospects remain bright, outside of its commodities exposure, the FTSE leaves you with relatively less skin in the cyclical game than other stock markets.

Driving it higher are heavyweights, themselves benefiting from a recipe of positive drug news, refinancing, share buybacks, Asian exposure, high oil prices and a weak GBP.

According to Russ Mould, investment director at AJ Bell, there are four factors powering the FTSE 100 to record highs: