US President Donald Trump’s administration appears to be ready to lift a ban on American companies selling hardware and software to Chinese telecoms company ZTE.

Reports emerged last night that the US and China have agreed on the broad outline of a deal that will sell ZTE return to US markets, though it seems the details are still being ironed out.

In exchange for Trump’s removal of the ban, ZTE will make major changes in management, board seats and potentially pay fines, the Wall Street Journal reported.

Last month the US Commerce Department banned American companies from selling to ZTE after the company allegedly violated sanctions against trade with Iran and North Korea, then broke terms of a deal with the US.

Shares in the company were heavily hit by the ban and there were fears that the company would go out of business as a result.

ZTE was forced to suspend shares in Hong Kong and Shenzhen in mid-April after analysts warned over the “substantially damaging” hit from the US move to ban American companies from doing business with the Chinese telecoms equipment maker. 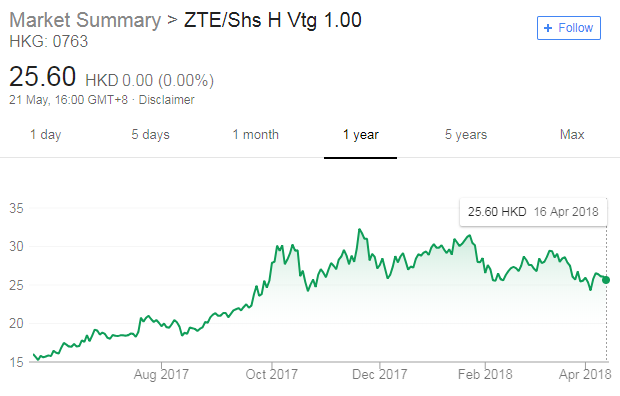 Trump has repeatedly taken to Twitter to update the market on the situation. He claimed he and China’s President Xi Jinping were “working together to give massive Chinese phone company, ZTE, a way to get back into business, fast”.

Just last week, he said in a tweet that the situation with ZTE was “reflective of the larger trade deal [Trump is] negotiating with China”.

China has reportedly threatened to pull out of trade talks unless Washington agreed to ease sanctions on ZTE.

Trade talks between the US and China have been going on for a number of weeks, easing fears of an all-out trade war between the two economic powerhouses.

Trump has long criticised China’s growing trade surplus with the US and in March set off a trade spat by proposing import tariffs on a number of Chinese goods, sparking a tit-for-tat dispute with a series of threats from each country that would have resulted in hundreds of billions of dollars worth of tariffs.

Meanwhile, ZTE is also facing problems in the UK, where the National Cyber Security Centre has warned telecoms companies in the country not to use ZTE equipment when installing new broadband and mobile networks due to national security concerns.