The pound has been having a terrible week — mainly due to concerns that next week’s general election could result in a hung parliament.

When UK prime minister Theresa May called the snap general election back in April, the Conservative party had a 21 point lead over Labour.

However, the current political forecast has changed dramatically since. The latest constituency-by-constituency polls from YouGov and The Times suggests that May could lose 20 seats and her 17-seat working majority, resulting in a hung parliament.

YouGov carried out 50,000 interviews over the course of a week and the results show that May could win 310 seats, down from the 331 seats the Conservatives won in 2015, and short of the 326 seats the prime minister needs to form a government.

It is thought Labour could win 257 seats, up from 232 seats in 2015. This is a stark contrast to previous predictions at the beginning of May, which said that Labour could expect to lose 100 seats on 8 June.

“The slide in the pound is another example of markets not being prepared for a close election, let alone a hung parliament. Speculative short positions have been unwound, leaving sterling looking for a fresh direction. So speculators may reload short-pound positions if the election is indeed a lot closer than was implied by the sharp rally when the election was announced.”

However, this could change. YouGov’s chief executive Stephan Shakespeare told The Times that the figures could change dramatically before next Thursday.

“The data suggests that there is churn on all fronts, with the Conservatives, Labour and the Liberal Democrats likely to both lose and gain seats.”

The Conservative lead is narrowing

Last week, YouGov polls showed the Conservative lead had narrowed to a mere five points over Labour. Support for the opposition party and its leader Jeremy Corbyn has been slowly growing over the past few weeks. 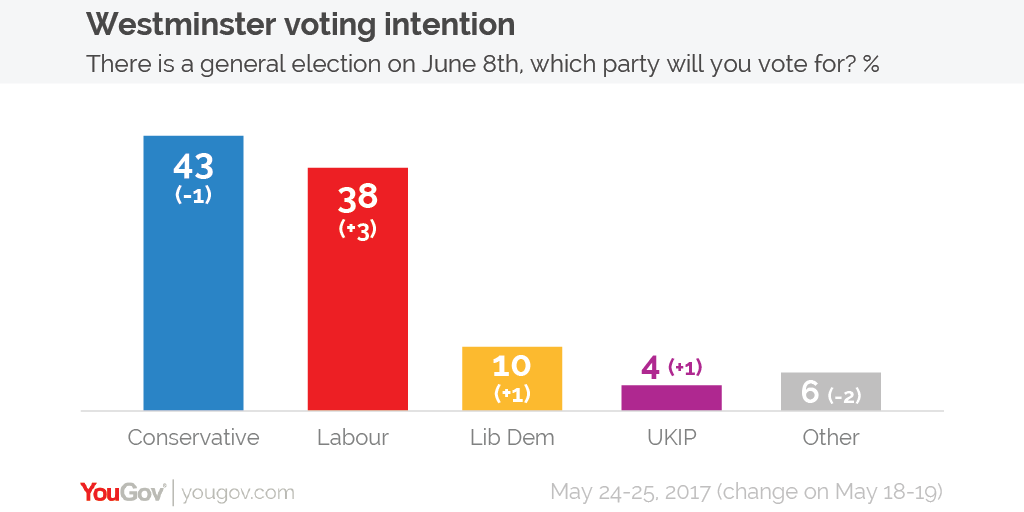 The pound fell 0.5 percent on the day from its previous day’s close to $1.2861, the lowest level it has been since 12 May, as the markets react to the swing in public opinion.

“We’re potentially in the trouble zone. Sterling correlates well with anything that shows a Tory majority and vice versa so if you’ve got this situation where the majority closes right down it may come to a critical level where it might not have a sufficient number of seats in the house. The market doesn’t like that.”

According to the Times, the five point lead means the party’s majority in the House of Commons could fall from 17 to two come 8 June. This could trigger a further sell-off in the pound.

This was the first opinion poll to be published since the terrorist attack in Manchester on Monday, which saw 22 young people killed and 57 injured after a shrapnel bomb went off at an Arianna Grande concert at Manchester’s Evening News arena.

However, according to YouGov’s director of political and social research, Anthony Wells, it is likely that the fall in support is in response to last weekend’s furore over the Conservative manifesto’s so-called dementia tax and the subsequent change in policy which took place on Monday, instead of being a response to May’s leadership over the attack

“It has been a highly unusual few days in an election campaign, arguably unlike any other in history. There is no way of guessing what will happen in the two weeks to polling day but we will be able to be more confident about how voting intention settles down over the next few days.”

Over in the US, the FTSE closed yesterday on a record high after last week’s mini-shock. Brent Schutte, chief investment strategist for Northwestern Mutual Wealth Management told CNBC:

“Investors have been focusing on strong earnings and improving fundamentals rather than political noise. Now people are wondering what to worry about next.”