A spike in heating use across the country has triggered a warning by the UK’s National Grid that the country is running out of gas.

The grid called on UK homeowners and business to cut back on heating in a bid to save dwindling supplies.

As storm Emma approaches the UK temperatures have plunged as low as -7.8 degrees celsius, prompting health officials to urge people to crank up their home heating.

“National gas demand today is high and due to the extreme weather conditions, there have been gas supply losses overnight,” the operator said, adding: “At 5.45am this morning we issued a ‘Gas Deficit Warning’ to the market.”

This is an indication to the market that we’d like more gas to be made available to ensure the safe and reliable operation of the national gas network. We are in communication with industry partners and are closely monitoring the situation.

Chemical company Ineos has told the BBC it could cut gas consumption at its Runcorn facility by 20%, due to National Grid shortfalls.

However, the company does not expect the gas use reduction to make much difference as it gets most of the heat it needs from its own waste plant.

While it is unlikely that the UK will actually run out of gas, the alert was prompted after after an outage at a liquefied natural gas import terminal in South Hook, Wales where all 60 million cubic metres per day of capacity came offline in an unplanned outage, according to Tom Marzec-Manser, the head of the European gas team at commodity price agency ICIS. 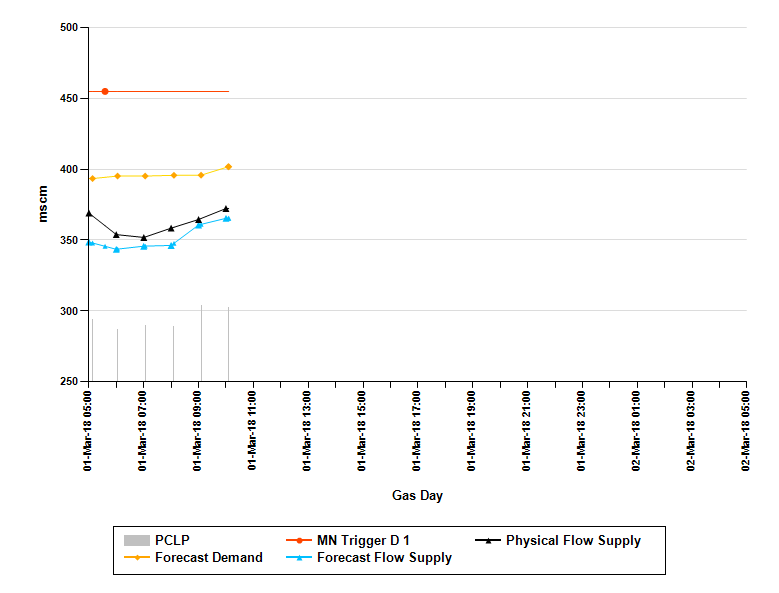 Gas market prices jumped in the UK yesterday to a 12-month high as more snow was forecast and power outages in gas terminals spurred demand.

Gas prices were at 190p a therm on Wednesday, more than three times the average of 56p a therm seen so far in February.

A red alert for life-threatening weather in south-west England and south Wales, was issued on Thursday as biting snow blizzards gripped the country.

A man died in the UK yesterday after falling in frozen lake in the south east London city of Bexleyheath.