Analysis of the more than 200 million Indeed users showed that one in ten enquiries about British tech jobs come from outside the UK.

Technology jobs are most popular among non-EU jobseekers, who will be unaffected by the UK government’s pledge to bring EU visa rules in line with non-EU citizens. Some fear that this will deter EU talent from seeking employment in the UK.

Current UK work visa rules often require an annual salary of £30,000 or more, which may explain why higher paying tech roles are proving so popular.

“Its popularity among non-EU jobseekers could provide a valuable Brexit hedge, as the ability of non-Europeans to apply for work in Britain will be unaffected by the UK’s departure from the EU. That will provide some reassurance for Britain’s tech employers.”

What are the most popular jobs for non-EU jobseekers?

Driving non-EU interest in UK tech jobs is India, with a fifth of Indian jobseekers showing interest in UK jobs between January and September this year.

Three out of the top four most popular jobs among non-EU jobseekers are in technology. They are SAP consultant, iOS developer and Android developer. The fourth technology role to feature in the top ten is Java developer.

Combined, these four roles have an average salary of £52,000. And overall, India accounts for seven out of the top ten most popular jobs. 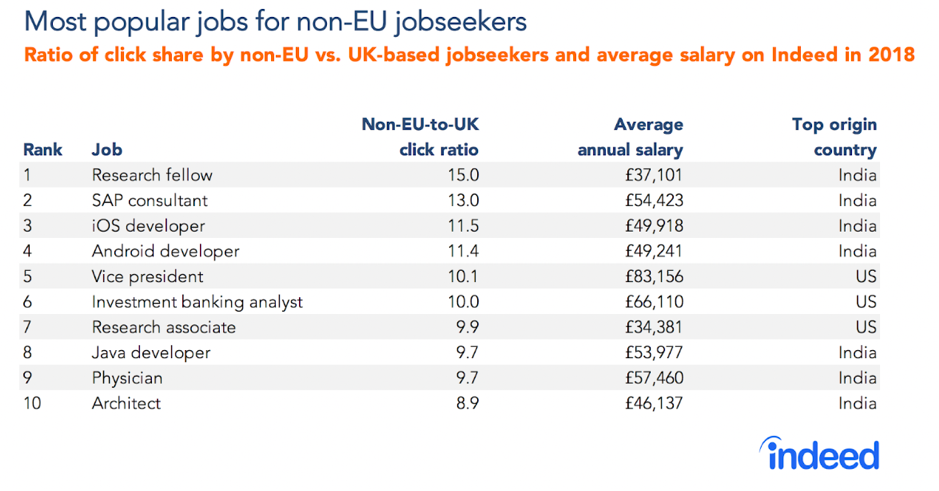 While the UK continues to attract non-EU high-skilled workers to the tech sector, Adrjan warns that the Europeans may be deterred from applying because of Brexit restrictions.

“The government’s plan to level the playing field for EU and non-EU workers seeking to come the UK after Brexit may interrupt the supply of Europeans looking for skilled but lower-paid jobs,” he said.

“A shortfall in European applicants for entry-level but specialist roles, especially language-based positions, is unlikely to be able to be filled by British applicants, with language learning in the UK continuing to decline,” explained Adrjan.

“While initially problematic, this may result in significant pay rises in these sectors to enable European workers to meet any future salary threshold and remain eligible for a working visa.”

Three of the four most popular UK jobs among high-skilled global jobseekers are in tech.