0 Reddit Email article LinkedIn 0 0
jonathanminter
Jonathan is the editor of Motor Finance magazine. You can reach him at jonathan.minter@verdict.co.uk

Figures on the number of cars built in the UK in 2016 make, for the most part, happy reading.

The 1,722,698 cars built in the UK last year were the highest since the turn of the millennium, and a healthy 8.5 percent more than in 2015, according to the Society of Motor Manufactures and Traders (SMMT) latest numbers.

Double digit growth in the numbers of Jaguar Land Rovers built show that British premium cars remained much in demand across the globe. 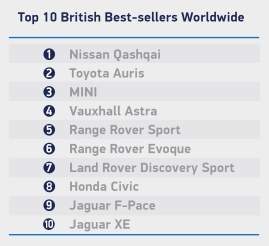 This strength in premium cars looks set to continue and nine of the ten brand new car models which began production in the UK in 2016 were premium.

Last year’s performance wasn’t an anomaly, either — British car manufacturing has been growing for a number of years now, and has come a long way since the financial crisis when, in 2009, the country produced just 1m cars. 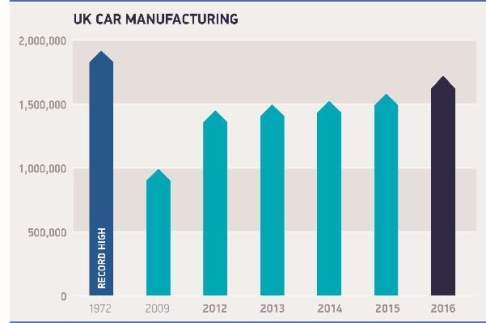 “The tremendous growth in UK production is testament to the global competitiveness of the UK automotive sector. High class engineering, advanced technology and a workforce committed to quality have helped turn around the industry, making the UK among the most productive places in Europe to make cars. Significant investment in new plants and products over the past few years has driven this growth, not a post-Brexit bounce.”

Unfortunately there are a number of factors which suggest British manufacturing growth could stall or potentially even reverse over the next few years. 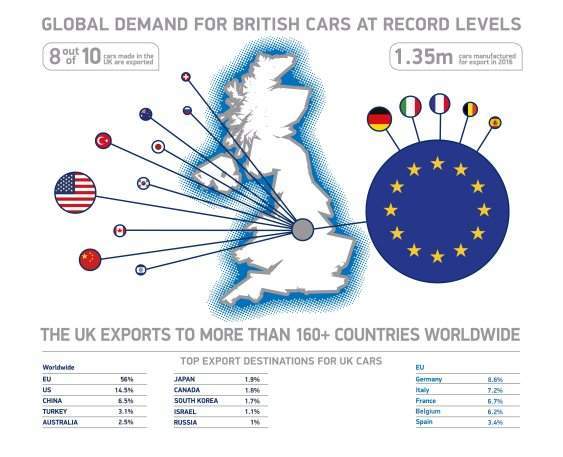 The problem is 8 out of 10 cars manufactured in the UK in 2016 were built for export, and of these, 56 percent were for the EU.

The SMMT hasn’t been subtle when describing what problems Brexit could cause for the UK’s manufacturing scene, and when releasing the 2016 manufacturing data, Hawes again highlights the current stakes:

“We want trade deals but they must be the right deals, not rushed deals. Failure to do so could damage UK automotive manufacturing beyond repair.”

It is worth noting that the EU also exports plenty of cars to the UK. For example, the Ford Fiesta, which is consistently the best-selling car in the UK, is made in Germany .

A second potentially worrying fact is that the UK’s second biggest market is the US.

While the new US president has so far focussed his attention on cars produced in Mexica and Germany, the fact remains that the US was responsible for nearly 200,000 British made cars last year, and has just elected a President who has shown little problem in espousing the desire to ‘buy American’.

Again, we simply don’t know enough about what impact Trump will have on the US automotive market, and whether his drive to get more Americans behind American made wheels will have a huge impact on British exports, but it remains a potential oil spill waiting to happen.