Virgin Galactic has unveiled the cabin design that will take its first passengers into space, revealing an interior that is part 2001: A Space Odyssey and part private jet, as the company ramps up towards launch.

Shown off in a livestream event followed by a press-only virtual Q&A due to the coronavirus, the reveal took place days before Virgin Galactic released its Q2 results, and only a week after Michael Colglazier began his role as the new CEO.

It comes as the company moves ever closer to getting its licence to operate from the US Federal Aviation Authority (FAA), with former CEO and now chief space officer George Whitesides telling reporters at the reveal that the company only had “one or two flights” still to conduct to achieve this.

“We’ve already cleared many of the provisos from our FAA licence. At our last earnings call, we announced that we had done 24 out of 29,” he said.

“We’ve obviously got our next earnings call on Monday, we’ll provide an update to that figure, but we do think that we’ll have one or two more flights that will get us through that final phase of, of the clearing the provisos.”

Following that, he said the company will conduct “a small number of flights” containing four test passengers, before it conducts its official maiden flight carrying Virgin Galactic founder Sir Richard Branson into space. 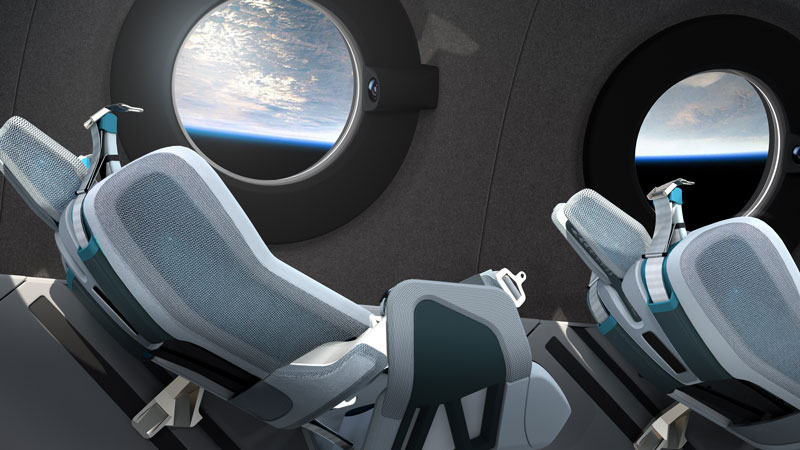 Founded in 2004, Virgin Galactic is a key name within the space tourism industry, with actress Angelina Jolie, GE managing director Alan Watts and Canadian entrepreneur John Criswick among those believed to have purchased tickets.

Virgin Galactic founder Richard Branson had initially hoped that the company’s maiden flight would take place in late 2009, however this was repeatedly pushed back due to delays in the development of its rockets, particularly in light of the 2014 crash of SpaceShipTwo VSS Enterprise. 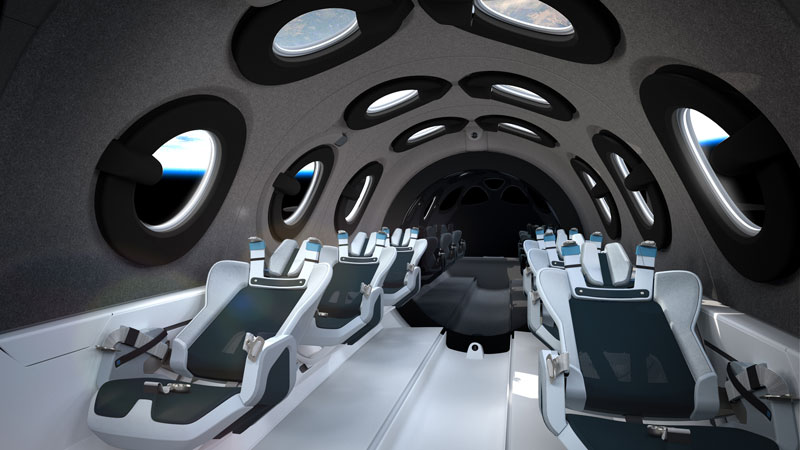 A flight on Virgin Galactic is believed to come with a six-figure price tag, and rumours recently suggest that the company is amping up its prices – something that Whitesides did not deny.

“We intend to pursue a premium pricing strategy and but that’s really going to be part of the overall customer experience,” he said.

“We think the incredible experience that we’re going to be offering people is just out-of-this-world and we’d like to say, maybe not once in a lifetime, maybe a couple times in your lifetime, because we hope that a few people will fly with us a few times.”

The cabin design, while obviously not the primary focus of the experience, has been developed in collaboration with design agency Seymourpowell in pursuit of this goal.

“The cabin interior will be successful when the spaceflight, and the view of Earth from space is the star of the show, and the cabin is almost an invisible, but perfect, supporting act,” said Virgin Galactic’s chief astronaut instructor Beth Moses, in the reveal.

To achieve this, the cabin has been designed to not only facilitate high G-force boost and re-entry, but also to make the most of zero gravity, where the area of interaction suddenly changes to include all surfaces, floor to ceiling.

The twelve circular windows have a soft-touch surround that can be grabbed and used to position astronauts during weightlessness, while lighting has been carefully designed to enhance the experience – giving passengers a reflection of themselves over their view in the flight’s early stages, before being fully extinguished at the peak of the journey to fully enjoy the views of Earth.

There are also 16 cameras positioned throughout the cabin, removing the need for passengers to bring their own devices on the flight and instead letting them soak up the experience.

While the seats astronauts fly in may not normally garner much attention, the seats are a vital part of the spaceship cabin design, providing safety and comfort throughout the flight.

These have been designed by Seymourpowell using high-tech fabric from Under Armour, designer of the company’s space suits, with a colour scheme to match their design, but they also have to provide a wide selection of technical solutions.

“Because of course, it’s going to be operating in zero-G just as much as high-G as well, of course, and one-G on the ground as well.” 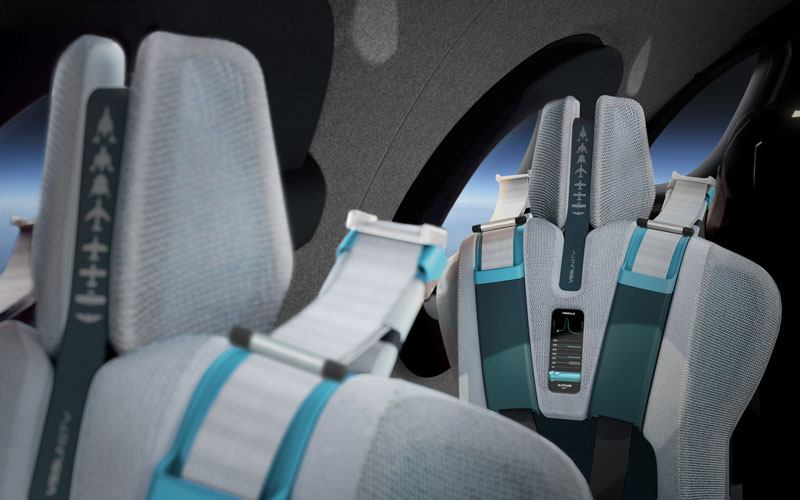 Added to this is the fact that Virgin Galactic passengers come in a wide range of shapes and sizes, all of whom need to be accommodated for.

“So understanding that allows us to have a broad suite of parts of the seat that allow us to size and manipulate very minute little details to customise the seat for every single person is going to be joining us,” he said.

The seats are designed to recline during the launch process, and feature a screen on their backs with live data about the launch and a direct connection to the cockpit. Their design also is intended to maximise the space in the cabin passengers have to float around in during the zero-G part of the experience.

“We’ve cantilevered the seat from the cabin wall as well so that actually releases a little more space below your seat and increases the volume of the cabin,” said Brown.

“So in tandem with the seats reclining when you’re in apogee and free to roam around in the cabin, just that manipulation of the seat position gives actually much more freedom for you to then go and enjoy weightlessness in space.”

See yourself in space: The mirror 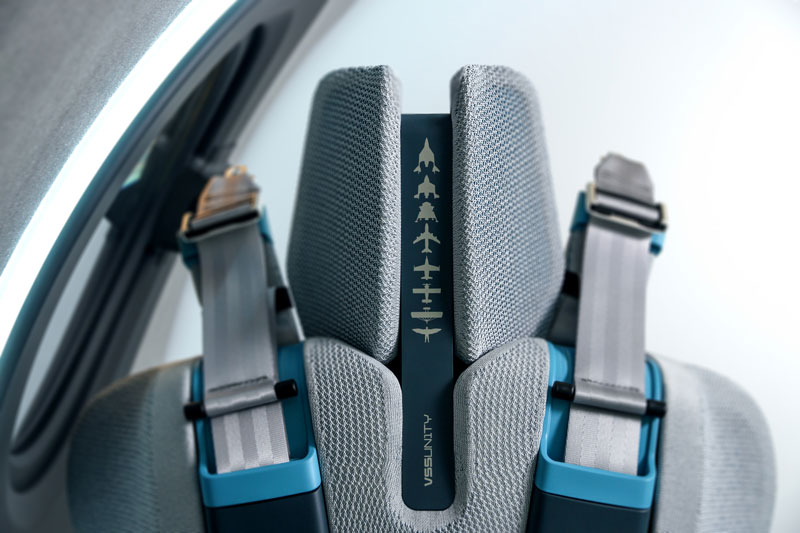 In a bid to maximise the experience of being in zero-G, Virgin Galactic has taken the unusual step of including a large spherical mirror at the back of the cabin design, which will allow passengers to see themselves floating.

“Beyond the amazing seats, beyond the beautiful cabin, the great views that we’re going to be framing for all of our customers, I actually think that the one that most excites me is, ironically, the real analogue response that you’ll get when you look into the vast mirror that we’ve got at the back of the cabin,” said Brown.

“We’re obviously covering not only the view and recording the experience that our customers are going to have on board, through the cameras that we have, but we think that there’s a real memory burn that customers are going to have when they see that analogue reflection of themselves at the back of the cabin. Seeing themselves floating freely in space, and just the real enjoyment, that very personal interaction that they’ll have with the with the experience.

“That’s something that I’m really looking forward to hearing personal stories about from our customers as they fly with us.” 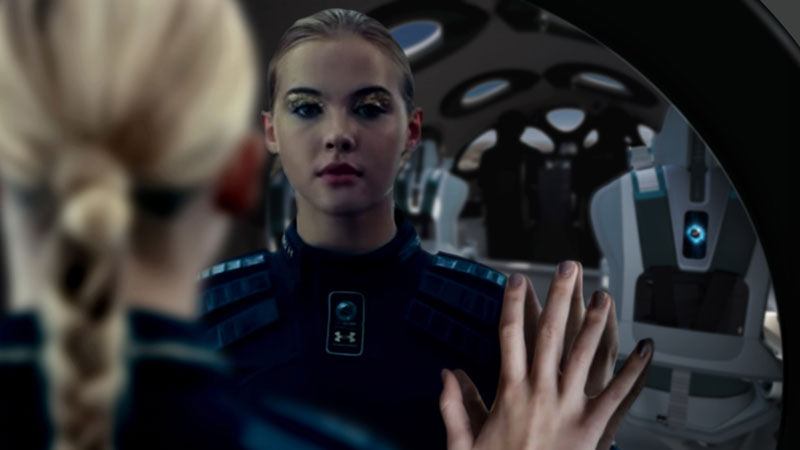 Of course, for the vast majority of us the idea of flying into space will remain out of reach even after Virgin Galactic begins commercial flights, however in the longer term the company does hope to lower prices and increase accessibility.

“I would say the long-term vision of Richard Branson, and I think others, is to open this experience up to as many people as possible and that, hopefully, someday entails potentially lower costs,” said Whitesides.

However, in the shorter term the company has launched an augmented reality (AR) app that it hopes will give fans a taste of the experience, enabling them to visualise the cabin and spaceflight experience.

“The app opens up that experience to people all around the world,” said Whitesides.

“We’ve been hoping to do this for a long time. And this is a great opportunity to do that. So that anybody with a smartphone can get a little taste of what the Virgin Galactic experience will be like, and also what space is going to be like. And so I really hope as many people as possible can download that app.”