Facebook’s star – and the Facebook share price – has continued to fall as advertisers and investors threaten to abandon the social media platform.

Mark Zuckerberg, Facebook’s chief executive, finally spoke out last night about the Cambridge Analytica scandal, admitting that his company made mistakes and describing events as a “major breach of trust”.

The mea culpa – posted on Zuckerberg’s Facebook page and accompanied by an interview with CNN – came a full five days after the story broke that data-communications company Cambridge Analytica had misused Facebook data on over 50 million users.

For ISPA, a British group of advertisers that promote more than 3000 brands on Facebook, the statement seems to be too little, too late.

The trade body is reportedly demanding further answers from Facebook at a meeting next week, specifically over whether users’ data passed to third parties without consent. If it is confirmed that it did, or answers are not forthcoming, ISPA members might ditch the platform.

They are not the only stakeholders spooked by recent events. Financial groups are reviewing their holdings of Facebook shares while they assess the crisis.

These include Nordea, the Nordic bank managing £283 billion, which says it will no longer let its sustainable investment arm buy Facebook stock.

Sasja Beslik, head of sustainable finance at Nordea, said that the decision was due to “the high-level revelations and the turmoil surrounding the company with a strong public backlash”.

He also told Bloomberg that Nordea was “worried about systemic issues” and how they “are managed” at Facebook.

Facebook has lost about $60 billion from its share value in recent days. On Tuesday shareholders sued the company in a San Francisco federal court over losses they received. 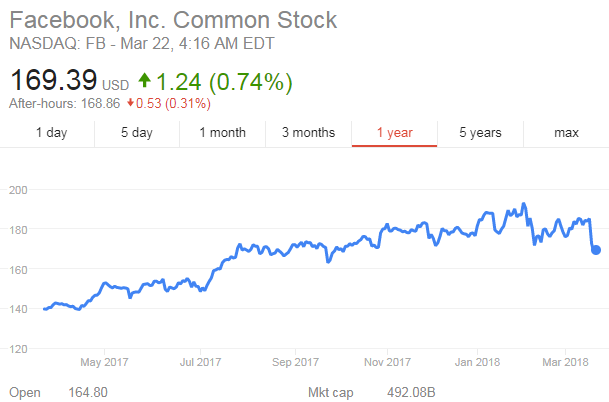 Mark Zuckerberg tried to assure the public last night that the current crisis wouldn’t happen again. He claimed that the platform changed in 2014 to “dramatically reduce data access” through apps but promised to carry out a “full forensic audit” of apps that access user data.

Zuckerberg also said that, in the future, Facebook would reduce the data that users give apps and remove developers’ access to user data through apps they no longer use.

While this specific issue involving Cambridge Analytica should no longer happen with new apps today, that doesn’t change what happened in the past.

We will learn from this experience to secure our platform further and make our community safer for everyone going forward.