2018 is barely underway, but tennis fans are already in for a treat, as the sport’s best players gear up for the ATP Australian Open.

As one of four Grand Slam events played throughout the year, the Australian Open should provide some answers to the burning questions that 2017 left behind.  Will Novak Djokovic return to his best after struggling throughout 2017? Can the now 36-year-old Roger Federer continue to compete at the top?

While big names like Andy Murray and Serena Williams won’t be in attendance, the Australian Open still has plenty to offer.

Ahead of the ATP Australian Open, here is everything that you need to know:

When does the ATP Australian Open start?

The Australian Open is technically already underway. Qualifying kicked off on Wednesday, 10 January.

Players will continue to compete for the final places in the main championship until Sunday, 14 January.

The championship will eventually get underway on Monday, 15 January. The venue will open its doors at 11pm London time (10am ACT), with the first round set to get underway at midnight.

The first round will be played across four sessions, starting on the morning of Monday, 15 January and ending in the evening on Tuesday, 16 January.

The winner from each match will then progress to the second round. This round will take place between Wednesday, 17 January and Thursday, 18 January. The heavy schedule continues with round three and four, which are played between Friday, 19 January – Saturday, 20 January and Sunday, 21 January – Monday, 22 January respectively.

This will narrow the field down to eight players and the action will start to pick up. The quarter finals will see four matches played over the following two days in each group, starting on Tuesday, 23 January and ending on Wednesday, 24 January.

The Australian Open will then hold its showpiece finals over the weekend, starting with the women’s singles final and men’s doubles final on Saturday, 27 January.

The mixed doubles final will then be played on Sunday morning, before the men’s singles final brings the tournament to an end in the evening.

Melbourne Park’s iconic, bright blue courts will host the ATP Australian Open. Originally built to host the Grand Slam, Melbourne Park has since played host to a number of sports, including basketball, cycling, swimming and motorsports.

The major of the Australian Open matches will be played across the venue’s three enclosed courts – the Rod Laver Arena, the Margaret Court Arena and the Hisense Arena. 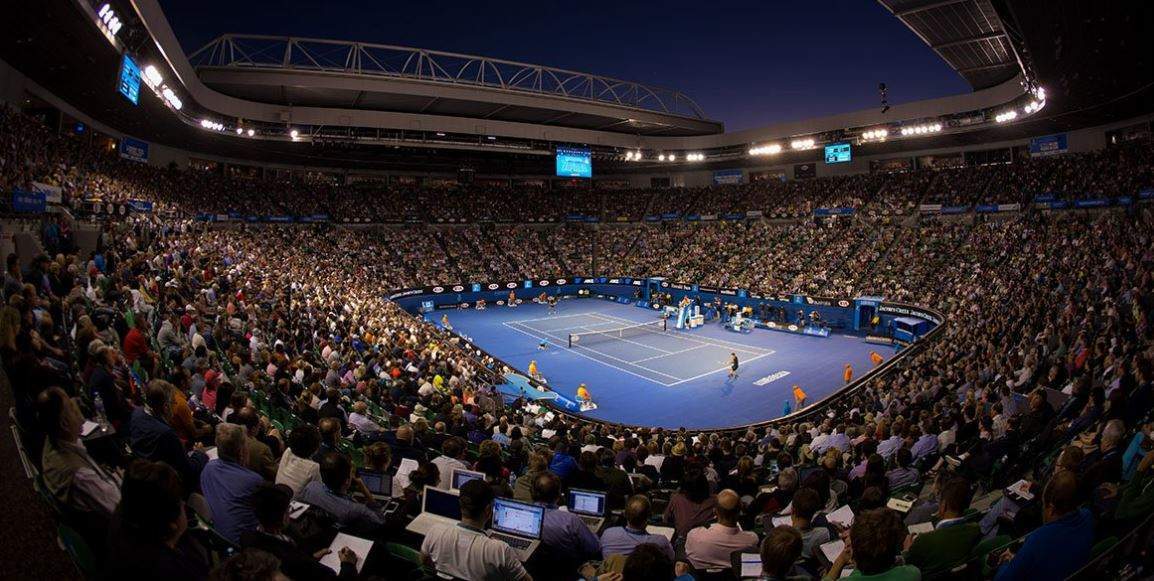 Here are how the world’s top ten men and women will open the tournament:

Rafael Nadal enters the tournament as the ATP’s highest ranked player, but number two Roger Federer is the favourite to prevail according to Oddschecker.

The betting aggregator has tipped Former number one Novak Djokovic to make a good start to 2018 after disappointing last year. Grigor Dimitrov and Alexander Zvarev make up the top five in the Men’s Singles tournament.

Bookmakers have tipped Karolina Pliskova, who claimed the world number one spot last year, to come out on top in Women’s Singles. Simona halpe, Elina Svitolina, Caroline Wozniacki and Garbine Muguruza make up the top five.

ATP has increased the Australian Open prize money by 10 percent from last year’s tournament, meaning that there is 55m AUD up for grabs this year.

The two singles winners will each receive 4m AUD, with the runners-up taking home 2m AUD. Doubles champions will win 750,000 AUD, while mixed doubles take a far smaller pot of 160,000 AUD between them.

Tickets are still available via the Australian Open website.

Unfortunately, you’re too late if you hoped to catch the grand spectacle. Tickets are already sold out for the men’s final. Spectators have paid up to 805 AUD to see the best of the best in action.

Will the ATP Australian Open be on TV?

Alternatively, fans will also be able to watch the tournament online. The Australian Open website will be streaming the tournament via their website throughout. These streams can be found here once the tournament gets underway.