The benefits of AI and wider automation on businesses are undeniably significant. Tasks that would have taken days, hours or even weeks to do can now be done in a matter of minutes, and far more will be impacted in the future.

However, there is a downside: jobs. While we are unlikely to see the total number of jobs available drop significantly, there will be dramatic upheaval in what positions are available. And unlike previous industry-transforming eras, the change will be across a host of job types and experience levels.

“Solicitors: a computer is going to be able to find case law a lot better than a solicitor can. Even programming to some degree: there’s an open-source project done by DARPA, the research part of Department of Defense in the US, which is taking all the open-source code and basically getting AI to work out how to write code using that as its base.

“Everybody thinks oh, well I’ll be a software engineer, I’ll be fine. No, you won’t be because actually computers are going to write code better than you will.

“Where I think software engineers really will have a gain is where a) they can write the testing environment properly and b) where they understand the business. Because it’s not going to be a question of ‘this is what we do, this is what we need, now go and do it’, it’s going to be a question of software engineers really understanding why we need it. And that’s something which is far more difficult for even for AI to do.”

This transition in the skills required for roles is, argues Towers-Clark, vital to building businesses that can excel in this new AI-driven age. And this isn’t just a theory: he put this into practice at his own company, transforming the very way the company is run in the process. 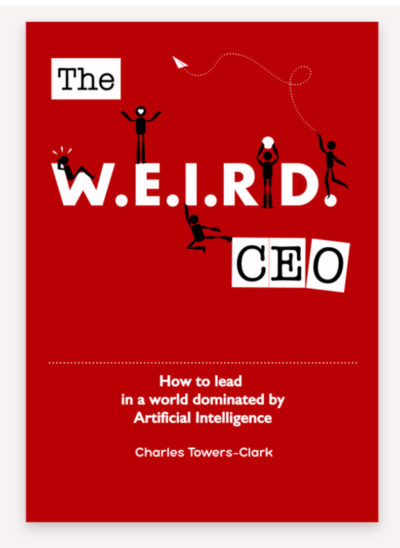 The notion that businesses – not just employees – need to change in response to automation is relatively novel, but Towers-Clark argues that this is core to being effectively prepared for the rise of AI.

“In the future, the jobs done by humans are jobs that are going to require human skills,” he says.

“I think an awful lot of the jobs that we have now are going to look very, very different. An awful lot of the things that we do in the office now are not going to be done by us. And a large part of what we’re going to be doing is working out how to make the best of computers and AI to create the efficiencies that will just come along – not even that we need to have, that will come along as a result of AI.”

Central to this is not just reskilling, but changing the way employees think about their work and its place in the wider business.

“I think there is, over the next 15 years, going to be huge, huge job losses and at the moment everybody’s saying ‘well it doesn’t matter because other jobs will come along like they did in previous industrial revolutions’ to which my argument is yes, but this is completely different because, previously we could retrain into a similar type of job.

“Here we need to retrain not the skills but the mindset. The mindset to say ‘okay, I can’t do this task, it’s now being done by a computer. So what added value do I now need to add to my role in order to continue being efficient and being useful? “

The solution, says Towers-Clark, is to promote the development of five skills that form the core of his book, The W.E.I.R.D. CEO: How to lead in a world dominated by Artificial Intelligence.

“What W.E.I.R.D. stands for is wisdom, emotional intelligence, initiative, responsibility and development. And I’m really focused on those five because all of those things are difficult for computers to do. And those are the things which humans need to do.”

While Towers-Clark’s approach is about a complete transformation of the way businesses run themselves, at its core are these five skills, which were developed in response to his own experience of restructuring his company.

“This all comes from what I did in my company. I’m CEO of a company that’s got five or six offices around the world in different cultures. And so this came about because basically I got fed up of making all decisions and realised that using the brains of everybody, the 40 people or so in the company, was going to be far better than trying to use my brain,” he says.

The first of these five skills is wisdom; however, this does not mean simply being wise.

“Really what it actually means is knowing when you don’t know something and going off and asking for advice from others,” explains Towers-Clark, adding that this ties into the second skill, emotional intelligence.

The next two, initiative and responsibility, are, according to Towers-Clark, “the hardest” to put in place.

“They certainly have been the hardest with within my company to implement. And the reason why is that from birth – well, from about two years old – we’re told what to do. And we have an educational system which tells us what we should be learning and how we should learn it rather than actually encouraging us to work out what we should learn and working out how to do it,” he explains.

“So it’s a downward spiral I see on that, but it can be an upward spiral the other way.”

“So people try and understand what they’ve done and why they’ve done it and it how they can develop further in order to feel more empowered.”

Transforming a company for the automation era

While these skills were central to Towers-Clark’s transformation of the Pod Group, there was far more to his own company’s restructuring than simply focusing on certain skills.

“You can’t go lump summing it and saying ‘right, you need to use initiative’ or ‘you need to be responsible’. I mean you can, but they will not do anything about it,” he says.

“So really what we had to focus on is the tools which we could put in place to encourage people to do that.

“Everything we’re doing is to try and encourage people to take the initiative and take responsibility for themselves.”

There were a host of changes that formed this approach, but all centred around the idea of supporting this change in employee mentality. And one of the first was to change the way holidays were allocated.

“Our holiday policy is very easy: we don’t have one. You take holidays when you like, and just so long as you don’t leave your colleagues with too much work or in trouble, then you can take it whenever you want. You work wherever you like. And that’s kind of the easy side. Actually the difficulty with that is I often have to tell people to take holidays rather than the other way around.”

With that in place, the company moved onto more significant problems.

“So we made all of the accounts transparent: everybody in the company knows what net profit we make every month. And actually it’s a surprisingly liberalising thing, that, because if suddenly the CEO doesn’t have to be trying to pretend or plaster over bad news but instead can just say things exactly as they are, and people are responsible and so long as they’re given all the information people are quite capable of taking in bad news or good news, whichever way round it goes.”

This was a core part of the change, but it required something else to be transparent: salaries.

“We realised that you can’t take an investment decision unless you understand what your colleagues are earning because the major cost to any office-based company now is the salaries. So we then said right, let’s make the salaries transparent. And that was hard.”

This move caused significant push back from employees – although notably none directly objected to their own salaries being made public knowledge.

“It was always somebody else: the other people wouldn’t like it. I never discovered who the other people were. And so we had a real battle on that, that took about three months to get people comfortable and then everybody finally agreed and saw why it was necessary,” he says.

“So we opened up the salaries to everybody and it was a complete let down. Within one hour the only comment was ‘well I thought that anyway’. We went through three months of pain to say that.”

With salaries now public knowledge, the issue of pay became an inevitable target.

“Having done that, we then said, right, we need to change the way that we’re paid. So put it out there, and there were lots of really complicated ideas about how we could do this.

“Eventually, we never really agreed on it, so I just said, ‘Well, what if we just choose our own salaries?’ – to which everybody looks completely aghast as if I’d lost it again. And thereafter, once everybody had calmed down, they said ‘Yeah, actually, not a bad idea’.”

The company now allows individual employees to change their salaries every three months, with help from an evaluation process and market rates for their role.

“All of these things which we’ve been doing just give people the responsibility and the self empowerment, really, to feel in charge of their own destiny and their own job.”

Now that the Pod Group has adopted this change, Towers-Clark’s role is different, but that does not mean he has maneuvered himself out of a job.

“It’s a very weird thing as a CEO, because suddenly you don’t have to make decisions. I don’t basically make decisions anymore,” he says.

“I let other people take decisions and they have to get advice from other people as to why they’re doing it, and in that process of getting the advice the other people may be objecting first of all, but then they understand why, or alternatively they maybe got good advice and they changed the decision. So from that point of view, from a CEO point of view, it’s very liberating.

“But as a CEO my job now is to be not there to make decisions when it comes to business, but to be very autocratic to make sure that we carry on with these processes. Because everybody is so used to working this way, it’s very easy to slip back into the old hierarchical method of working. So it needs constant being on top of it to make sure it doesn’t slip away.”

As AI progresses, Towers-Clark believes a growing number of companies will benefit from this kind of transformation of business approach. However, it is key to note that this way of leading a company also promotes a different type of CEO better suited to the AI era.

“It does require a different set of skills,” says Towers-Clark.

“One of the things I’m about to start doing is coaching, training because the job that I see for me now is to act as a coach. And that’s it. And otherwise get the hell out of the way because everybody else does the job a lot better than I do.”