Central banks around the world are currently allocating resources to blockchain technology, with a particular focus on researching the concept of a central bank digital currency.

The banks are drawn by the idea of fast, efficient digital money that does not carry the costs of handling cash and that can be tracked as it moves through the financial system.

Efforts in this space have intensified in 2017, although research remains at an early stage and many issues have yet to be worked out.

But most commentators agree that the world is moving towards the use of digital currencies. For instance, Bank of England is already considering issuing a digital currency, and within the bank radical options are being discussed.

One scenario even involves blockchain being used to bypass high-street banks. Individuals would hold accounts directly with the central bank, cutting out commercial banks’ role as middleman in the circulation of money. 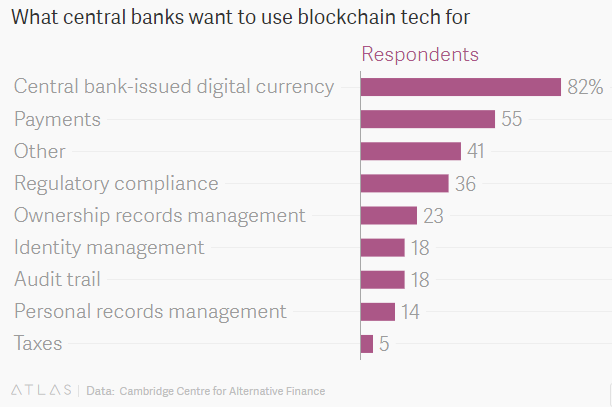 As part of the 2017 Global Blockchain Benchmarking Study a group of 25 central banks were surveyed about their blockchain policies.

The results of the study indicated that the main reason central banks are excited about the technology is so that they can harness it to issue their own cryptocurrencies.

Over 80 percent of central banks say they are researching this technology for that reason.

Central banks’ interest in deploying blockchain in this way is in step with moves by commercial banks and other financial institutions to use the technology to ease cross-border settlement transactions and overhaul back-office infrastructure.

However, there is a looming challenge around security and regulatory issues that needs to be navigated first, which will require cross-border co-operation.

Monetary authorities and the IMF must come together and provide a platform for discussions around regulation of digital money that will be used globally.

While blockchain and its challenges are still being explored, the potential impact of the technology is increasingly becoming evident.

These numbers will prove compelling as the world’s central banks prioritise their blockchain agenda over the coming years.