These are dire times for the UK retail sector. Household names such as Debenhams are being rocked by store closures, as consumers shun bricks-and-mortar stores for online shopping. But amidst all the chaos, a brand new retail space is opening that offers a fresh approach to offline shopping in the digital age: Coal Drops Yard.

Opening this Friday in London’s Kings Cross, Coal Drops Yard is a dramatic development from architects Heatherwick Studio and property developer Argent. The redevelopment of a Victorian coal store that has since been used as a glass factory and, later, the infamous Bagley’s nightclub, Coal Drops Yard is an architectural triumph. Hosting 65 stores across three levels, it is topped by a dramatic roof that merges the Victorian with the hyper modern.

But while visually the building is remarkable, what really sets the building apart is its approach to retail. Because while previous developments were focused around providing user-friendly spaces for high street brands, Coal Drops Yard is focused first and foremost on providing experiences.

“Our interest is in making an amazing place,” said British design legend Thomas Heatherwick, founder of Heatherwick Studio, in a press launch today. “To us, the shopping is the excuse for a place.

How Coal Drops Yard puts experience at the heart of retail

Getting consumers to come out and visit shops is an ever-growing challenge for retailers. But Coal Drops Yard resolves this by shifting the focus away from the idea of shopping, and into a wider sense of space and enjoyment.

“To be with your fellow humans is more precious than ever. And you don’t have to go out,” said Heatherwick.  “So somewhere has to mean something and not be a generic duplicate, which maybe could be got away with 20, 30 years ago before the digital revolution.”

This involved curating a collection of brands that would support this approach, a challenge that was tasked to Craig White, senior project director at Argent.

“What we did is we created a set of values, and developers love values and they put them on the wall and say ‘this is what we want’, but it doesn’t really work like that,” he said.

“What we created our values for was to create some guiding principles, and it was about enriching, delighting and uniting. So what we were saying was it’s not about consumption, it’s actually about your experience of that brand and how the brand will tell you the story, enriching your life.

“Rewarding for your time, because time has become the luxury now and if you’re going to come and spend time with us, we wanted you to have a lovely time in return.”

Events will be central to Coal Drops Yard, with retailers encouraged to host workshops, live music and other celebrations. There are more than ten different events planned for the opening week alone. 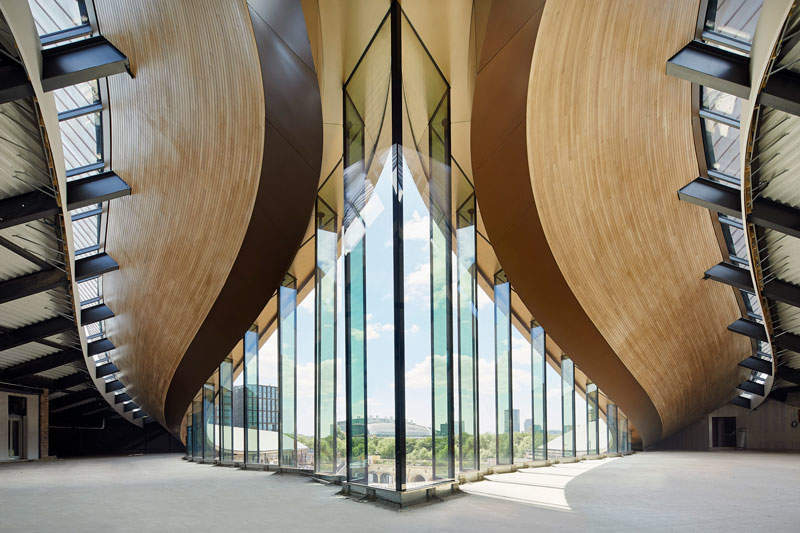 The space created by the dramatic roof, which will house Samsung from 2019

The design, luxury and streetwear brands at Coal Drops Yard

Central to the experience is, of course, the brands. And Coal Drop Yard boasts an eclectic mix of big names, up-and-comers and hidden gems.

This includes big names such as COS, Samsung and Paul Smith, alongside concept stores such as homeware and fashion-focused S120 and fresh from LA TWIIN. The food selection reflects a similar spectrum, with emerging names on the London food scene, such as HICCE from former Murano head chef Pip Lacey, sitting alongside Michelin-starred Barrafina.

The development has even managed to lure some online retail brands offline, including cult online fashion retailer Wolf & Badger.

“Over the last three years we’ve met over 1,200 brands, so we’ve been busy!” explained White.

“What we were trying to do was find something a little different for London and our view was always this is just a London street. Places that really inspired us were places like Japan, with the service and the culture, Scandinavia, Milan and Paris, and the seaboards of America, the manufacturing heartlands, and, of course, Great Britain.

“We just put the feelers out and once we’d started to get some kind of movement going, because remember this place didn’t exist as a retail destination, actually friends of friends then started continuing that motion.” 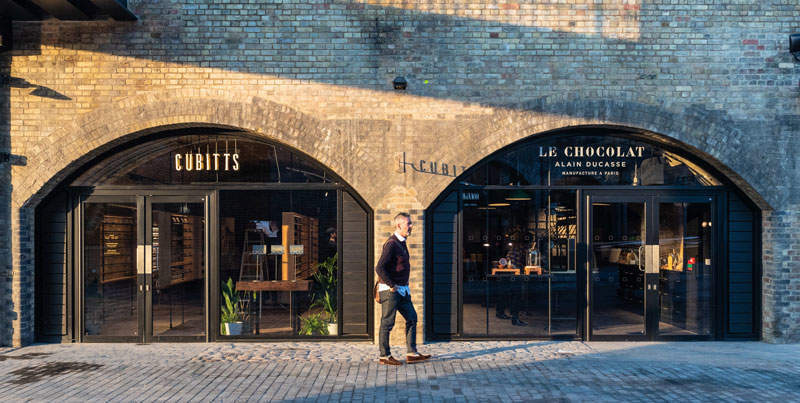 Stores Cubitts and Le Chocolat will be among those opening at 12 noon on Friday.

Creating a space for up-and-coming talent

The jewel in the crown of the wider Kings Cross development, which also includes Google’s new London headquarters, Coal Drops Yard sits directly across from leading design school Central St Martins. So it was important to the developers that fresh design talent would also be able sell their work in the space.

This took the form of Lower Stable Street, a street that forms part of the overall development dedicated to new and emerging brands. Here experimental stores will sit alongside pop-ups, workshops and events.

“We really wanted to develop a strategy for that street that would fit within the wider objectives of Coal Drops Yard of being a place of reinvention and discovery, but create a space that could be an incubator for emerging and young, entrepreneurial businesses,” explained Frédérique Jungman, senior project manager at Argent.

“We’ve found incredible brands and designers and we’ve also really worked very hard to try and create a structure that would be welcoming to them. So a lot of these brands are people who don’t necessarily have the capital for expensive fit-outs, who don’t have covenant strength for long leases and who need flexibility to be able to test their concept, and build their brand and find their feet.

“We wanted to make sure that we could have units that are only 15 square metres, tiny units, that would announce a student graduating from the college to have a chance to be here and to be given a space, as well as more established organisations so that there’s sized units from 15 square meters up to 2,000 square metres,” added Heatherwick.

“And so that range could give a variety of human experience and opportunity for the diversity that I think we all yearn for in places to go to. Shopping is an excuse for getting out. Whether you buy anything or not, to me doesn’t matter at all. But it is a togetherness and to get out beyond yourself somehow.”