Coaxial electrospinning, a century-old manufacturing technique, is finding a new lease of life in medical applications thanks to research by scientists at the University of Cincinnati.

The method, which spins two or more materials into a fine fibre with a spiderweb-like appearance, was invented in 1902 and embraced by the textiles industry in the 1930s.

But now scientists, led by Andrew Steckl, Ohio Eminent Scholar and professor at the University of Cincinnati’s College of Engineering and Applied Science, are exploring how the material can be applied to the medical industry – with impressive results.

“We’ve broadened the field enormously. We’re one of the top research groups in the world working on coaxial electrospinning,” said Steckl, whose latest research is published in the journal ChemPlusChem. “It’s been great fun.”

What is coaxial electrospinning?

The spiderweb-like fibre that is characteristic of coaxial electrospinning starts out as liquid polymers, which are pumped into a nozzle using a custom machine. Each time, there are at least two distinct materials involved, which leak from the nozzle in a manner reminiscent of a tap in need of repair.

However, this leak is intentional: when electric voltage is applied, the polymers are turned into a jet of spiderweb-like thread, with one material at its core and another encasing it. And it is this combination that provides such significant potential in medicine.

By surrounding one material with another, the properties of both can be utilised. In textiles, this is used to produce materials with novel properties for comfort and weather resistance, but in medicine it has the potential to provide entirely new forms of drug delivery.

“The beauty is you can have combinations of polymers with properties you don’t normally find in nature,” said Steckl.

Steckl and his team are by no means the only group working on coaxial electrospinning – a number of companies are developing large-scale production solutions for the technique, for example – but their focus on medical applications is producing some striking solutions that could ultimately turn into life-changing new products. 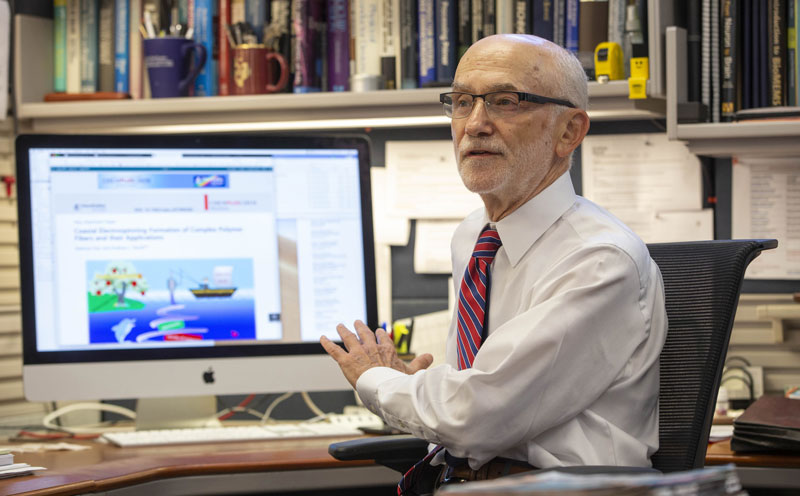 Andrew Steckl, who is a leader in applying coaxial electrospinning to the field of medicine.

One area with significant potential is in contraception, with Steckl working alongside former University of Cincinnati College of Pharmacy professor Giovanni Pauletti to use coaxial electrospinning to provide more effective alternatives to current options.

Serving as an alternative to sponge-type contraception options, the electronspun fibres would be shaped into a tampon-like product with the ability to both trap and kill sperm.

The scientists are also exploring giving the product properties against sexually transmitted diseases by designing it to release anti-effective drugs.

While still in the early stages of development, it is hoped that the resulting product would be both easier to use and more effective than current sponge-like contraceptives, giving it the potential to increase usage of this contractive type.

Finding an alternative to chemotherapy

Away from contraception, coaxial electrospinning also has potential for the treatment of glioblastoma, a type of cancerous brain tumour.

At present, this is often treated with chemotherapy, which is far from ideal.

“Chemotherapy essentially is whole-body treatment. The treatment has to get through the blood-brain barrier, which means the whole-body dose you get must be much higher,” said Steckl.

“This can be dangerous and have toxic side effects.”

Instead Steckl, in partnership with Dr Henry Brem and Betty Tyler from Johns Hopkins University, are developing an electrospun capsule that is applied to the affected area after the removal of a glioblastoma lesion.

This is designed to release the drug locally over a period of days or weeks, meaning that the drug can not only be used in lower doses as it does not need to get past the blood-brain barrier, but also does not impact the rest of the body in the manner chemotherapy does.

This advances on work conducted by Brem and Tyler to develop a wafer, known as Gliadel, to administer chemotherapy treatments locally, which showed success in that it enabled higher doses to be used without risking toxicity.

However, the electrospun capsule has advanced this further as it allows for custom combinations of medicines to be applied, which can be tailored for different durations.

“It has the capability to slowly release its payload, it’s biocompatible and multiple drugs can be loaded and released from it.”

Current animal trials have demonstrated improvements on the Gliadel wafer due to the ability to tailor the drug dosage and delivery, raising hopes that this will become a valuable and widely used alterative to whole-body chemotherapy in the future.

“Our hope is to deliver these agents using Dr Steckl’s technology to ultimately increase therapeutic options for patients with brain tumours,” added Tyler.

The ability to use coaxial electrospinning to tailor the quantities and release schedule of drugs means that the manufacturing process has potential far beyond brain tumours.

Steckl envisions it being used for a host of different drug delivery methods, including as an alternative to traditional pills.

This could, he said, be effective for conditions such as Parkinson’s because it would provide an alternative to the need to take numerous pills at different times in the day.

This would be achieved by creating electrospun fibres that only dissolve when the digestive system reaches a particular acidity level, enabling the release of active ingredients to be slowed or extended. This would allow patients to take a single dose made from electrospun medicines, eliminating the need to be forever remembering to take tablets.

“The problem is you may remember your morning dose, but you might forget your afternoon dose,” said Steckl.

“Should I take another one? Did I take three today? A single longer-lasting dose is a lot simpler.”

Read more: Future of healthcare: What will medicine look like in 2040?