How good a representation of you is your data self? Do all copies of data have the same value? Artists are attempting to answer those questions with a bright pink robot, a digital pinball machine and an airport arrivals board at the Copy? That? installation at the Open Data Institute (ODI) in London.

The ODI is a non-profit founded by web inventor Sir Tim Berners-Lee and AI expert Sir Nigel Shadbolt in 2012 to advocate the use of open data for positive change. Copy? That? is the ODI’s research and partnership season for 2019 to 2020 seeking to question the trustworthiness of data as it gets repeatedly replicated across the internet.

Poet Mr Gee explored the “soul of Brexit” with his installation Bring Me My Fire Truck. He took William Blake’s poem Jerusalem – often hailed as the unofficial English national anthem – and ran them through Google Translate for all 24 languages of the Europe Union (EU) then back into English. The results are displayed on an airport-style arrivals board with the place of origin indicating the language being translated. Bring Me My Fire Truck is the result of translating the line ‘Bring me my chariot of fire’ into German and back.

“The initial remit for the ODI has to do with copying and they asked ‘can a copy have the same value as the original?’” Mr Gee told Verdict.

“What’s interesting is as you stand and watch it, you start to see some lines have become funny, some become sinister all the meanings disappear and new meanings come into being. The words England and Jerusalem remain, so there’s always something to anchor you.” 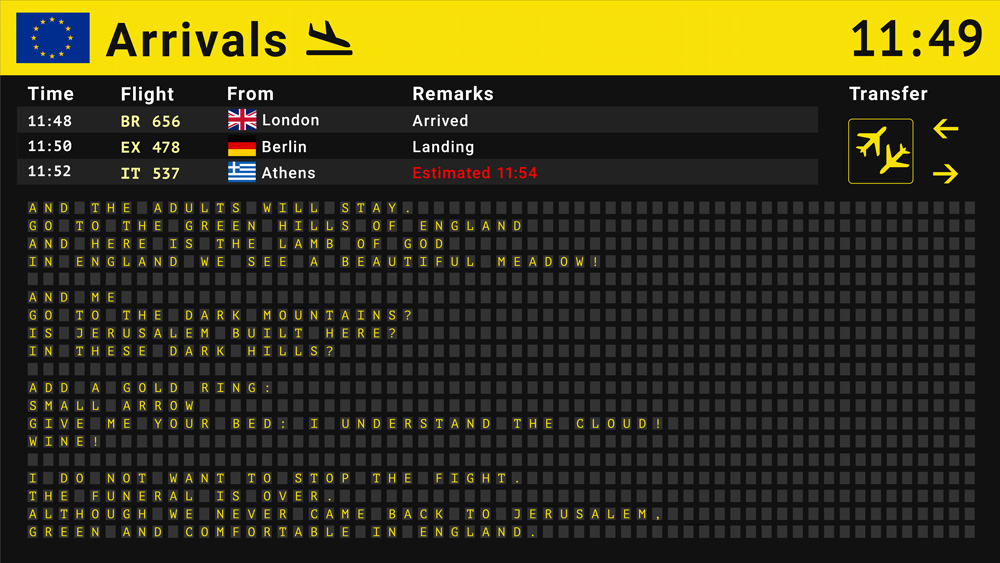 Bring Me My Fire Truck explores the “soul of Brexit” by translating the lyrics of Jerusalem into the EU’s 24 languages and then back into English using Google Translate.

Trusting technology with our data

The second piece, DoxBox trustbot, sees artist Alistair Gentry dressed as a, frankly disturbing, puppet-like character alongside a bright pink robot computer, whose cheery face and loud music encourages the audience to lean close to interact with it and hear what it is saying. Having gained the viewers’ trust, it asks what popular online platforms they use before shocking them with what personal data they have involuntarily shared.

“DoxBox is a pretend AI; it interviews you about your digital life and services you use, then it can tell you stories about the effect that might have on your life as a whole,” Gentry says in a video for the ODI.

DoxBox’s pink, glittery and cute aesthetics, reminiscent of a Japanese vending machine, contrast with the fact that it talks about really dark things.

“In Japan, they’re particularly good at masking authoritarianism as cuteness, so the police force has a cute mascot,” says Gentry. “DoxBox is transactions; it’s coercive, it uses some of those dark patterns. It encourages you to share more than you might want to and it rewards you.”

Gentry says that, in contrast to these darker implications, the ODI helps ensure data can be free, fair, open and equitable, and that we could use the same technologies to genuinely do good and be nicer to each other, a positive side he also incorporates in his work.

“We live in the real world, obviously, but we also live in a world of data that surrounds us invisibly and has huge impact on how we live and the choices we have in our lives,” Gentry says. “I really hope that comes through in people’s interactions with DoxBox.” 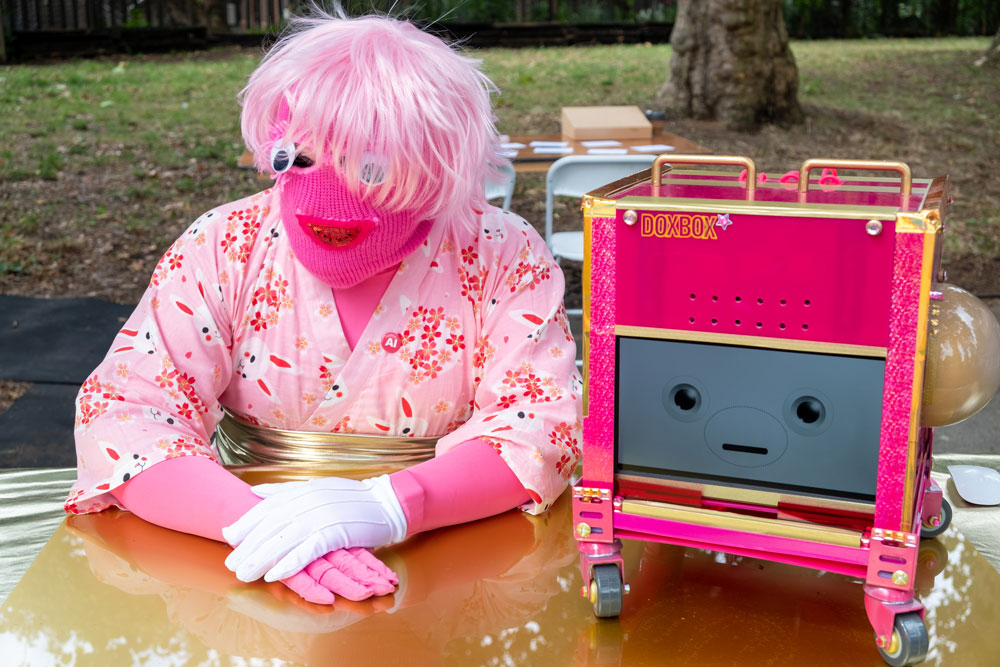 DoxBox trustbot is a pretend AI run by artist Alistair Gentry highlights the dark side of data sharing.

Mood Pinball also reflects the more positive impact of the data that surrounds us. It is a digital pinball machine with custom software and graphics that attempts to communicate the experience of a neurodiverse individual exploring a city and the overwhelming noise therein.

Featuring dreamlike images in surreal colours, Mood Pinball sees players reimagine how city-wide data might be used by an individual to find their comfort zones, and improve their experience of a city. The goal of Mood Pinball is to keep its Mood-o-Meter at ‘happy’, by responding to noise-level data revealed by gameplay.