Ecommerce startups have been the driving force in the technology, media and telecoms (TMT) IPO market for the past three years, scooping up 27% of all public listing proceeds among tech IPOs.

Blockbuster listings from the likes of Alibaba, DoorDash and KE Holdings have propelled ecommerce into pole position as the leading destination for IPO investment, dwarfing other technology areas such as 3D printing and blockchain.

That’s according to a GlobalData analysis of the TMT IPO market between 1 January 2018 and 31 December 2020. Its report, ‘Tech, Media & Telecom IPO Themes’, shows that ecommerce companies have proved a lucrative option for investors.

According to the data and analytics firm, investors that backed the 66 ecommerce-related IPOs during this three-year period have made an average return of 140%, as of 11 January 2021.

This reflects a mature and established market, with ecommerce giants such as Amazon having disrupted the retail industry and accelerated the shift to online shopping. 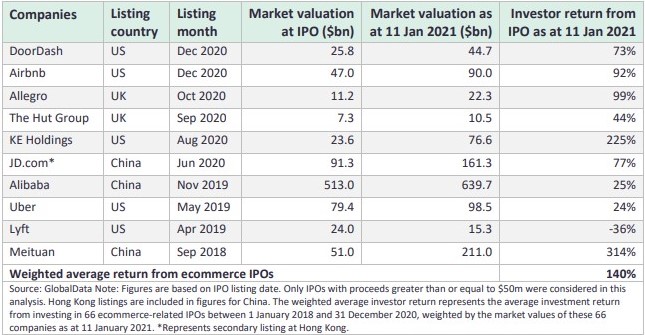 Mobile-related companies were the second biggest driver of the tech IPO market over the past three years, accounting for 18% of all proceeds across 45 public listings.

The majority – 30 – of these IPOs were hosted in China. This is a stark contrast from ecommerce IPOs, with 36 out of 66 taking place in the US compared to ten in China.

Combined, ecommerce and mobile companies accounted for 10 of the top 15 tech IPOs since the beginning of 2018.

Of the ten largest ecommerce IPOs over the past three years, five took place in 2020 despite the economic uncertainty caused by the Covid-19 pandemic.

Initially, the double blow of the US-China trade war and the pandemic caused overall tech IPO activity to contract as companies cancelled or delayed plans to go public. In the first half of 2020, there were 101 TMT IPOs – an 11% decline on the year-ago period.

The proceeds of IPOs in this period stood at $21.8bn, a 15% drop on the first half of 2019. But by the second half of 2020 investor confidence returned and a flurry of tech IPOs followed.

This included 15 ‘megadeals’, where equity proceeds exceeded $1bn. Snowflake, JD Health and Airbnb were among the largest.

Since 2018, collaboration tools and cybersecurity companies have generated the highest IPO returns for investors. On the other end of the spectrum the biggest IPO flops have been in quantum computing and blockchain – two nascent yet often hyped technologies.

Over the last three years, the US has been the most dominant IPO market for technology, media and telecom companies. However, China has been making ground, a trend that has been accelerated by outgoing President Donald Trump’s executive order forcing Chinese companies that the US deems to be controlled by the Chinese state to delist from the New York Stock Exchange.

To find out more about TMT IPO trends download the full report here.

Read more: China to up the ante on antitrust regulation in 2021, starting with Alibaba