Esports — competitive video gaming — recorded total revenue of $756m in 2017 and is on track to become a $1bn industry by the end of the year, according to video game data company SuperData.

Should that prediction prove correct, revenue will jump by 50 percent year-on-year to $1.14bn, despite growing by just 10 percent between 2016 and 2017.

SuperData’s estimate is based on the rising popularity of esports streaming.

According to the 2017 Year in Review report, the ten most popular esports titles attracted an average of 561m viewers between them each month in 2017.

As a result, sponsorship and advertisements made up 70 percent of all esports revenue. With viewership climbing, broadcasters are willing to pay increasingly large amounts of money for the streaming rights to the most popular events.

Likewise, Facebook got in on the act. The social media giant agreed a deal with esports company ESL for the exclusive rights to air its top tier esports competitions, the ESL Pro League and ESL One.

Merchandise and ticket sales (9 percent), betting and amateur tournaments (10 percent) and prize pools (11 percent) made up the other 30 percent. 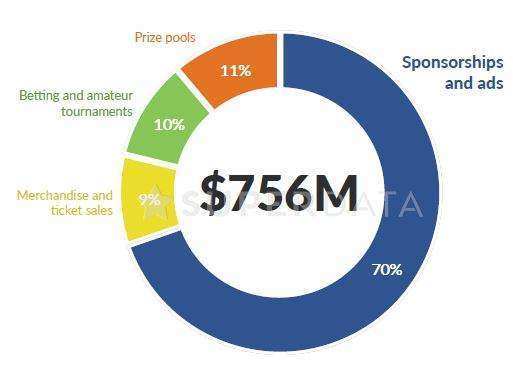 What are people watching?

Popular titles such as League of Legends and Hearthstone, which have helped to establish the industry, are among the most watched games.

However, much of the growth can be attributed to up-and-coming battle royale PlayerUnknown’s Battlegrounds.

Released in beta in March 2017 before officially launching in December, PUBG Corporation’s game generated 12 percent of revenue in the PC market last year, with total revenue of $714m. 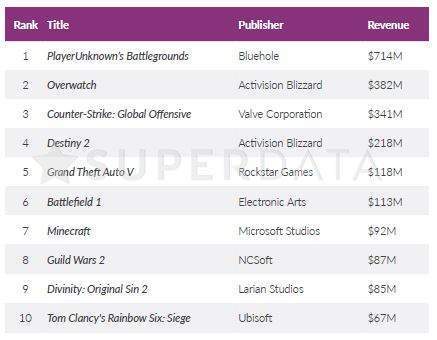 The title’s popularity has helped to make it one of the most popular esports titles. PUBG was the second most popular game by monthly unique viewers in 2017, with an average viewership of 102m, topping established esports games such as Dota 2 and Overwatch.

Hearthstone, Dota 2, Overwatch, Counter-Strike: Global Offensive, Heroes of the Storm, FIFA, Call of Duty and StarCraft II made up the top ten. 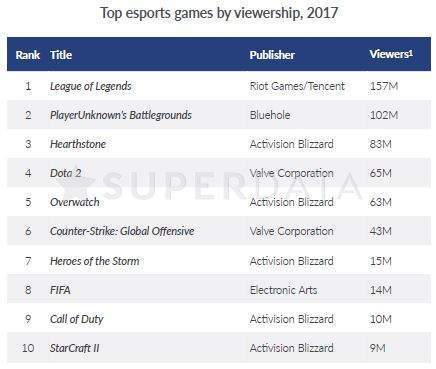