The eurozone economy is forecast to grow at the fastest pace in a decade this year according to the the European Commission, leaving the UK struggling to keep up when it leaves the bloc in 2019.

UK growth could plummet to just 1.1 percent in 2019, dropping to a low last seen during the recession of 2009.

While Brussels’ latest set of economic forecasts indicate that the UK’s economic slowdown will continue, the 19-country bloc will perform well.

Economic growth and job creation are robust, investment is picking up and government deficit and debt are gradually decreasing.

The commission also lowered its forecast for growth in Britain this year to 1.5 percent from 1.7 percent in May to reflect the impact of rising inflation.

The Commission forecasts UK inflation of above the European Central Bank’s (ECB) 2 percent target this year and next. 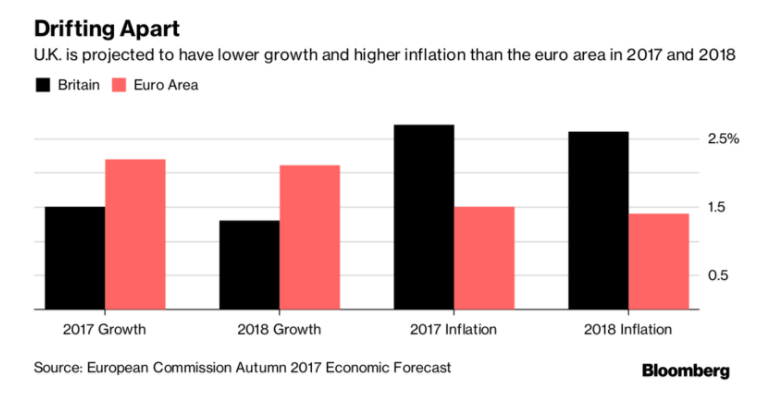 The commission said the projections do not influence the ongoing Brexit talks and were “based on a purely technical assumption of status quo in terms of trading relations”.

Pierre Moscovici, commissioner for economic and financial affairs, taxation and customs, said in a statement on Thursday:

After five years of moderate recovery, European growth has now accelerated. We see good news on many fronts, with more jobs being created, rising investment and strengthening public finances. Yet challenges remain in the form of high debt levels and subdued wage increases.

A determined effort from member states is needed to ensure that this expansion will last and that its fruits are shared equitably. Moreover, structural convergence and the strengthening of the euro area are necessary to make it more resilient to future shocks and to turn it into a true motor of shared prosperity. The coming weeks will be decisive on this front.

Brussels’ projections for the UK are more downbeat than those of the International Monetary Fund (IMF) and the Bank of England (BoE).

Both the IMF and the bank expect UK growth of 1.7 percent this year, compared with the EU’s forecast of 1.5 percent.